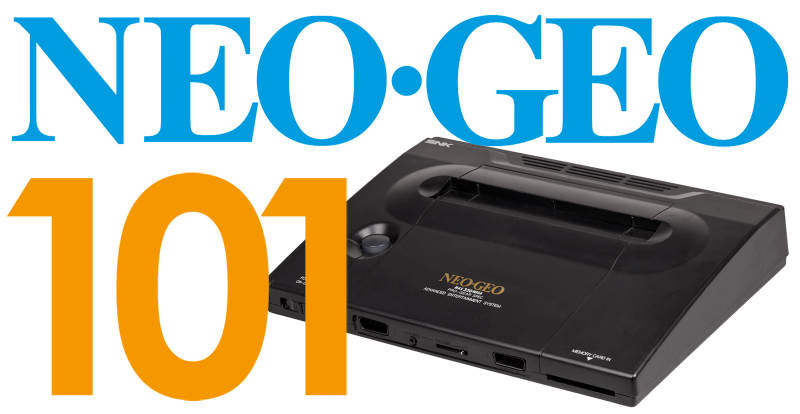 Presented by  Dylan, Christoph, and Racketboy

The RetroGaming 101 series is aimed at gamers who are just starting out in the classic gaming scene or are curious about an older console that they don’t know much about yet.

The Neo Geo family of hardware began with the Neo Geo MVS (or Multi Video System) released by SNK in 1990.  Boasting incredibly powerful specs and high quality titles, the Neo Geo quickly built a strong following in the early 90’s.  An interesting aspect of Neo Geo arcade cabinets is that they were capable of holding and operating as many as 6 different arcade games, a unique advantage that could save operators money and floor space.

Due to popular demand, SNK decided to create a home console branch from the main Neo Geo series the same year its cabinets hit arcades.  Throughout all of its variants the Neo Geo systems always managed to remain a cut above its competition in terms of raw power, something that was especially apparent in its home console releases.

A side note, this article focuses on the arcade history and home console Neo Geo releases.  The Neo-Geo Pocket is a different enough offshoot of the Neo Geo family to warrant its own article. 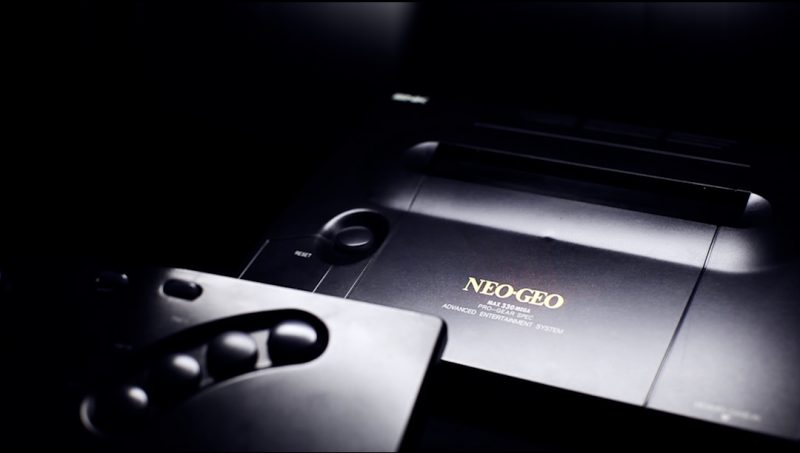 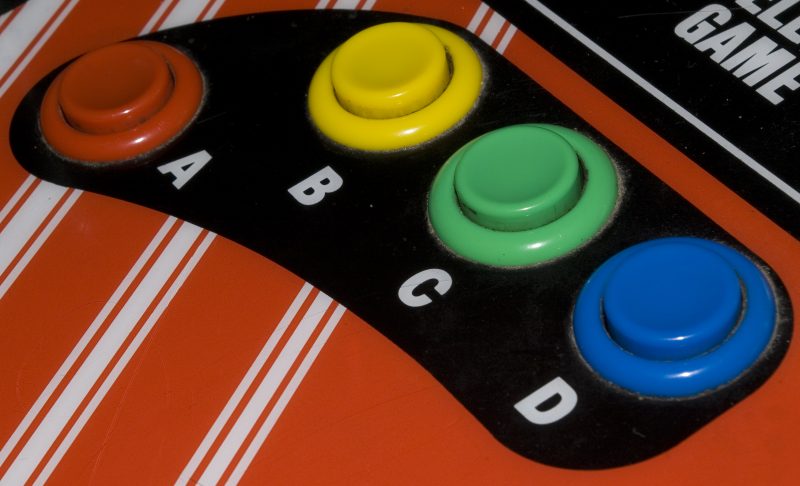 A Consolized MVS is an original Neo Geo MVS arcade system modified and installed in a custom enclosure to play through your home theater setup. These are built by do-it-yourselfers or crafted and designed by businesses. The general purpose of a Consolized MVS is to gain access to the largest Neo Geo library at the cheapest cost. Not only are MVS games the cheapest in the world of Neo Geo but also the easiest to consistently find compared to the AES. Although purchasing a CMVS comes at a higher initial investment – they ultimately offer the easiest, most economical and authentic way to play in the world of Neo Geo. Not only that, but a CMVS offers more features (video output selection, HDTV ready, Unibios) than ever possible on any stock Neo Geo!

If you want a CMVS, they typically range at $400-$900 depending on what features you want as well as what kind of enclosure is being used:

There weren’t a lot of Neo-Geo accessories, official or otherwise, but here’s the main things to be on the lookout for:

There are are many wonderful 2D titles in the Neo-Geo library.  If you’d like a good read about the best Neo-Geo titles, check out our Best Games That Defined the Neo-Geo.  But, if you want a short-and-sweet list, here are the essentials.

As mentioned numerous times before, the Neo Geo is not the console for cheapskates.  Both the hardware and the games can be very expensive.  Here are some financial points to keep in mind and some links to help you out.

Disclosure: one of the contributers to this guide, Christoph, is not only a long-time Racketboy forum member in high standing, but he is also the owner of Analogue Interactive, the company behind one of the newest Consolized MVS system mentioned above.   Nick (aka Racketboy) reviewed text to avoid any potentially biased descriptions of hardware to be fair but maintain proper information for the end-consumer.

Man, those NGCDs were really unreliable. (or I was really unlucky).
Two units died with the same problem: drive error.
After the second one I gave up. (and i got the first one repaired once)

The 4 controllers I got also had the same problem: the clicky sticks (which were awesome) stopped registering commands.
And they were really hard to find in Brazil (the arcade sticks even more).

Last night I went to the local bowling alley for the first time in years and to my surprise they had a neogeo cab there with Metal Slug (my favorite series in the neogeo library) playing. It’s the first time I’ve seen an MVS here in my sleeping little town since I was a kid and my excitement was almost uncontrollable, I grabbed my rental shoes off the counter and rushed for the cab fumbling my hand through my wallet for the required change on the short walk toward it. Pulling all the coins out of my pocket and shoving them into my pocket for easy access I dropped the first coin into the slot… rather than the cachunk sound of a coin falling into the hopper I was greeted to the sound of the coin falling back out the front of the machine. I figured that maybe the machine just didn’t like my coin so I grabbed another with the same disappointing result, in fact every coin I put in had the same result.

Crushed I went away still never having played MS on the original hardware, all I could do was go home and play via the wii compilation.

great article, but im not sure about the CDZ having a faster drive speed. i think the difference was that it had a larger cache.

Great article, though a couple of issues:

You refer several times to the AES games as “ports” however as far as I know they’re literally the same as the MVS games, so they really aren’t ports simply because the AES and MVS are functionally identical (more or less anyways)

Also, in the section on CMVS, it seems a bit like you’re trying to sell the Analogue Interactive CMVS. Most of the other pre-built CMVSes are compared to the AI one, and seem to specifically highlight negative issues between them. I have no issue with the AI CMVSes, as I find them to be thoroughly amazing, I just think it’s a bit weird for an article like this to come off as almost a commercial, at least in that small instance. Maybe I’m too sensitive, I dunno. Maybe I’m just jealous because I can’t afford any Neo Geo hardware! Damn!

eSPy is right. The CDZ is not a proper “double speed” drive. caching was superior, which meant games loaded faster.

and as far as the price quoted, the Neo Geo Gold System in the US went for 650 bucks, with the initial launch games at $200. (except for league bowling at $150). Prices did go up for certain titles later.

and it sounds like whoever wrote up the CD controller Pro writeup hasn’t actually touched one. I’ll give a general overview. It is a joystick and still retains the “clicky clicky” feel. This is also known as the “bean” or “kidney” controller. There isn’t a proper “ball” on the top, more like a ball with a huge indentation on top. Perhaps one could rest their thumb on it. The base is much smaller than the original sticks, the buttons feel cheap, and the general concensus is that the Pro controllers aren’t as good as the originals. Still, I would take this over the pad.

I fixed the parts about “ports” and the CDZ drive. I guess I didn’t think of how the word “ports” would be viewed when I read this over. I changed the word to “versions”.

As for the wording of the Consolized MVS units, I think the wording we settled on was rather fair. I honestly think at this point, it would be hard to recommend anything but the Analogue Interactive unless you really wanted to trim some cost from the price in exchange for less features or you didn’t like the walnut look.

I always enjoy reading your articles. Thank you for posting this.

I would save up in order to get the Console made of Wood.

“The AES’s cutting edge technology commanded a high price at retail for both games and systems. You could expect to pay an exorbitant $900 for a system and around $250-$300 per game. Prices on these consoles and games remain high even to this day.” I believe the Neo Geo sold for $650 for the Gold system which included 2 joysticks, the system and 1 game. Where as the Silver system was $400 and only had the system and 1 joystick. How that comes out to $900 is beyond me. Also the games started off at $200, not $250. However more popular titles did sell for more.

You should the Omega Entertainment Machine’s CMVS to the list of CMVS’s. It can be found at arcadeworks.net
It contains all the features of the Analogue Interactive model, but for $150 less, also the look of it is more AES in nature.

SNK is my favourite company when I have their games on the NES system. Unfortunately SNK wanted to be like the big player and made the Neo Geo. Although Neo Geo was a powerful machine with great games, it should never be a home system rather than be an arcade system board. SNK should port the arcade games to the 16bit and 32bit machines at that time to ensure profit flowing in and more capital. Another problem is that SNK develop too much fighting games and less on genres which led the company downfall.