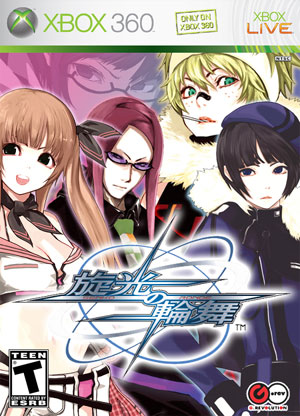 I’m thinking I will enjoy Senko no Ronde.

Senko no Ronde is a hybrid 2D shmup fighting game from G.Rev (of Border Down and Under Defeat fame) that originated on the NAOMI arcade hardware, but for some incredibly strange reason, never received a Dreamcast port (I’m still terribly bitter). Instead it was brought to the Japanese XBox 360 (go figure).

Videos of the game’s unique gameplay have been circulating the gaming interweb for a short while, but for some reason, it hasn’t made it over to the US. The only solid review of the game is from the Japanese arcade expert, Alex, at Insomnia.ac. He writes…

“In G.rev’s third arcade game players control robots called “Rounders” and square off against each other using a variety of offensive and defensive techniques. Rounders dance around the screen spewing out bullet patterns borrowed from manic shooters, or transform into bosses in order to unleash even more overwhelming attacks. Though 3D graphics are used throughout, battles are viewed from a top-down perspective and are constrained to a single plane, so the feel of the game is very much 2D….

Now Virtual On fans will get this game right away, so there’s little I have to say to them: Senko no Ronde is in effect a 2D version of Virtual On, and it’s damn good. Go play it.”
Read Full Review

Throughout the rest of the review Alex goes into more detail about the control scheme and the overall feel of the game. The bottom line is that traditional shmup fans will have to get used to the controls as they are a bit more complex and react differently than they might expect. Instead, the control scheme seems to be geared more towards fighting or mech/Virtual On fans. Shmup-heads can eventually grow to love the game, but it will take time. 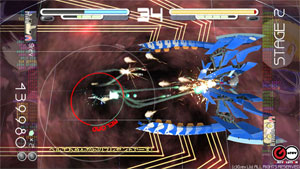 Anyway, back to bringing the games to the US. The localization was rumored a couple of months when the game showed up on Amazon.com. But now the good ‘ol ESRB has the game listed on its website under the name: Battle Storm Senko no Ronde. The ESRB has been the source of many reliable game leaks such as upcoming Virtual Console releases and is a quite reliable source.

While I haven’t personally played Senko no Ronde yet, I have a feeling that once it makes its way out of Japan, we will see it become a modern cult classic among the old-school gaming community.

If you want to see the game in further detail, XBoxyde has a collection of screenshots in addition to the first 10 minutes of Senko no Ronde gameplay