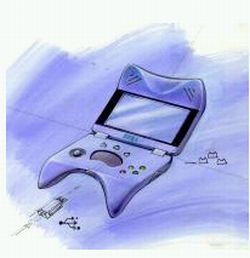 Could Sega be getting back into the hardware business? It is a little too late for this to be an April Fools joke, so I quess we’ll have to wait and see.

Anyway, supposedly Sega France (French source) has leaked some news regarding a new Sega handheld that will be able to, among other things, emulate classic Sega consoles. Sega has hopes of being able to play games from the Master System, Genesis, and even the Saturn and Dreamcast. I would be absolutely amazed if a little handheld could emulate either the Saturn or the Dreamcast, but maybe Sega really has some surprises under their sleeve. Either way, Sega did not reveal how they will be accomplishing this.

The game media would be cartidge-based — which is good news for both loading times and battery life (just compare the DS and PSP). It will also have USB ports to hook up various other periphials and enable a PC connection. The portable device will also accept Compact Flash and SD cards for storing data. It may possibly be used for games and other media files. There is a possibility that it will have DivX (and hopefully Xvid) video playback, so these flash memory cards would be very handy.

Always according to the source, Sega’s main concern is the compatibility of the hardware for the old games and battery life. Supposedly it currently gets only 3 hours of battery life with video playback (the PSP isn’t much worse, is it?). Sega would be working on an optimization of the screen in order to be able to make it less power hungry.

The device will be equiped with a 566Mhz Samsung processor, and 128MB nVidia graphics processor based on the GeForce 3D 4500 (similar to the Gizmondo’s graphics chip), and a LCD display capable of 640X360 resolution and touch-screen capabilities. It will have an analog joystick, four buttons and two triggers. Supposedly, it will not have a traditional D-Pad, but solid details were not availible.

The code name (I don’t believe its the final name) will be the “Sega Hedgehog” and is planned to be released in the 2007 Christmas season. As you can see from the concept sketch (supposedly from Sega as well), its a little awkward looking. It has a slight style cue from the Dreamcast, but I’m not sure why they wouldn’t make it more flat.

There may be some validity to this news as I did hear some very generic announcement a couple months ago that a device like this would be released by Sega. It was announced in conjunction with one of their new TV Games. From the wording of their announcement before, it sounded like it was going to have games built in — basically a portable TV Game device.

A couple reasons I would call BS on this… The portable market is very hard to break into. Sega should know this from their Game Gear experience, not to mention watching other companies trying to compete with Nintendo.

And again, I really don’t know how they would emulate the Saturn and Dreamcast — especially with that type of hardware unless they has some of the consoles’ original chipsets built in so that it would run natively instead of though emulation.

I really hope this works out, but I wouldn’t hold you breath.
Vote on whether you think Sega will release this portable console

Similar Posts From These Categories:
Sega

They say Christmas 2007(in the french article) not 2006 which in this case might be a little bit more realistic!

Not only the Gamegear, but the Nomad couldn’t help Sega beat Nintendo in the handheld market.

This thing has a chance for Sega’s hardcore following, but how many of us are truly there to buy as many units as they would need to make a real profit?

Hardly any, I think.

Thanks for the correction on the date. That does sound MUCH more believable.

In order to emulate Sega Genesis and especially saturn games it should have 2 more buttons as those have 6 button gamepads. With the Genesis first starting off with 3 and then getting 3 added later and the Saturn starting from ground up with 6. Also the dreamcast has 2 analog triggers and a D-pad. So this controller IMO is not adequate to emulate them all.

It’s an April Fool’s joke. If you read French it clearly says that at the end.

…Do you honestly assume every article you read was written on the same day you’re reading it?

I could tell that pic was fake even before I saw it was April fool’s, because that SEGA logo is way to sharp to be hand-drawn in the full size pic.

I get this handheld at autum 2006. preorders avaible
http://www.videospielehandel.de

The site even said it was an April Fool’s joke here: http://www.inpactvirtuel.com/news/Sega-Console-5643-SEGA-NE-PREPARE-RIEN-DU-TOUT-COMME-CONSOLE-.htm

“I could tell that pic was fake even before I saw it was April fool’s, because that SEGA logo is way to sharp to be hand-drawn in the full size pic.”

Off on a tangent, but that means nothing these days.

There’s no reason the original artist couldn’t scan his artwork, and then Photoshop in a logo for accuracy.

While most artists wouldn’t do something like that and still call it a drawing, in the commercial art world, anything goes, and if you need to put in a logo, It damn sure better look correct.

This is your best I absolutely love this website. yet!