It looks like Sega is helping the XBox Live Arcade show up the Wii’s Virtual Console again.

According to SegaOnline & XBox360fanboy, Sega will be releasing a series of their Genesis/Megadrive titles on the XBox Live Arcade under the name of “Sega Vintage Collection”. 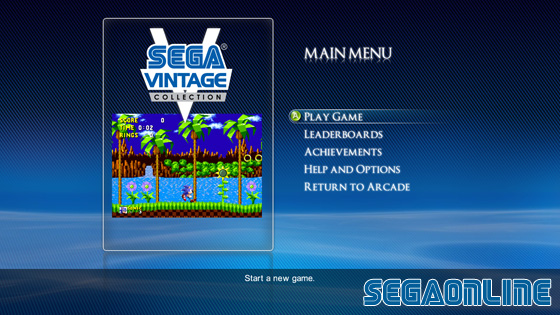 The collection will be started with the release of the original Sonic the Hedgehog game (not a huge surprise) and many other games may follow in the near future. I would imagine that many of the same titles that are on the Virtual Console will also be on the XBLA. You may also remember that there was a bit of a rumor that Streets of Rage was coming to the XBLA as well.

There have already been some screenshots released of the “Sega Vintage” interface. You will notice it seems to support some options such as graphical smoothing. It looks like the fact that XBLA releases having more features than their Virtual Console counterparts will be a continuing trend. I must also say that this interface design is very slick and is one of the best I’ve seen of all the XBLA and Virtual Console screens I’ve seen — and it matches the design of this site well 🙂 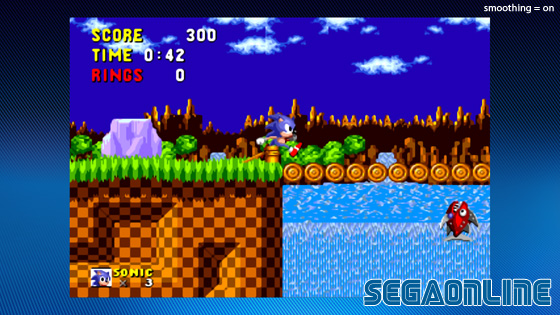 Needless to say, it will be interesting to see what other features and games Sega has in mind for the Arcade and how aggressive the pricing will be. For instance, I hope that they price the games appropriately to the depth and demand for a given game instead of the flat pricing for all Sega games on the Virtual Console. For instance, most people would be willing to pay more for Gunstar Heroes or ToeJam & Earl than Altered Beast or Columns. I find it quite ridiculous that Nintendo expects us to pay twice as much money for a DRM’d download than for the original cartridge on eBay.

Update: After some back and forth, it looks like this has been confirmed by Kotaku to be true

Some More info on the Sonic on Xbox Live Arcade, Its almost been over a year since they first announced it.

Well, I didn’t realize that opinions of the WII’s VC were swaying so far back in the opposite direction.

So happy to see Sega showing some love for MS.

Hoping that we might see Master System and Saturn games come out soon.
And maybe a Sega controller for the 360 too? ‘.’

Well, it turns out that it’s a fake — major bummer.
It’s possible Sega has something similar in the works, but these screens aren’t official.

Marurun, the VC simply looks a bit bare-bone and overpriced in comparison the the XBLA. It’s a fine service, but the 360’s offerings are just more polished and priced appropriately for the game as opposed to what console it appeared on.

“Sega all the rights move.”

haha — thanks for the heads up!

Really hope they put Toejam and Earl on it!

ok, I downloaded Sonic the Hedgehog and unlocked on xbox 360 on xbox arcade, and every time I wanna play it, its telling me too unlock it again too play full game, in which I already done that and lose my gamesave, I called up 4myxbox and that said I need too look up the companys name too get help, so I thought, it would be xbox problem, not the company, so I really need some help, thx!