Note from racketboy: Special thanks goes to Chrono for putting most of this guide together! The RetroGaming 101 series is aimed at gamers who are just starting out in the classic gaming scene or are curious about an older console that they don’t know much about yet.

Before Sega made wave with the Genesis/Megadrive in the 16-bit era, it had its first international console release with the Sega Master System.  It didn’t have nearly the success in the US as the Nintendo Entertainment System, but it had large market share in Europe and Brazil and still has quite a following.  We’ll try to cover all the basics about the Master System, but if you have any other tips or tidbits of info about this little machine, feel free to share it in the comments below. 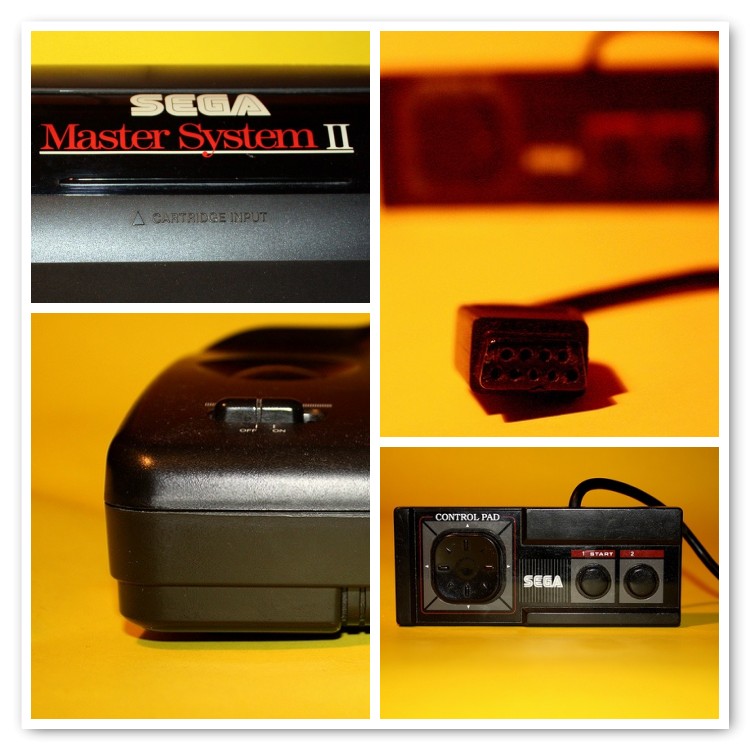 While this isn’t an extensive list, here are the most popular accessories for the Master System.  It’s also worth noting that Master System controllers use the standardized Atari-style 9-pin connector and can be connected without modification to all other machines compatible with that standard, including the Sega Genesis/Megadrive, Atari 2600, Commodore Amiga, Atari ST, Commodore 64, Amstrad CPC and ZX Spectrum with Kempston interface or similar.
Here’s some additional pictures of Master System Accessories

Man, the combination of 3D glasses and light phaser really make me want a Master System…

Here’s a mod I did to add A/V and S-Video out to a Mater System II unit:
http://www.stickfreaks.com/smsmod.php

Very nice article.
The SMS was my first console and I still love it, I’m collecting the Sega Cards now.
I also purchased the Playpal months ago, a very good handheld and it survived in the hands of my nephews ^_^

I’m a Brazilian game collector and I’d suggest you drop those comments about the SMS being still alive and well here, especially that part about Brazilian people being commonly unable to afford current generation consoles – this couldn’t be more inaccurate. The SMS is sort of alive here, but nearly nobody buys those sketchy emulators in ugly cases that Tectoy sells nowadays. As a matter of fact, Tectoy’s lost so much money trying to sell low quality products exploiting nostalgia that they decided to switch to cellphones, earplugs and similar gadgets after nearly going bankrupt. Brazil’s one of the biggest markets for the videogame industry and it’s WAY harder to find anyone who’s actually purchased one of these emulation-based consoles by Tectoy than it is to find modern consoles. Most gamers here own Nintendo Switches, XBoxes or Playstation units. I’m the only one among my gamer friends who’s into spending money on retro stuff.

Thanks for the Brazilian update — very helpful!

It’s nice to see that the SMS hasn’t been forgotten by everyone. 🙂

A few corrections, though:

* The SMS didn’t “lay the ground-work” for the Game Gear, since they are effectively the same machine (but the latter supports a palette of 4096 colours, has stereo sound, a smaller in-built screen, etc). But they have the same CPU, VDP (for the most part), RAM, sound system, etc.
* Sonic 1 and 2 are not ports of the Mega Drive versions – they are completely different games.
* Whilst the Mega Drive controller will work with most SMS games, /some/ don’t work correctly with them.
* Not all SMS games came in plastic boxes; Tec toy’s early games were released in card boxes.
* The orange tip of the light-phaser was a US-only thing, that did not happen in the EU.
* While the SMS is region-free, Japanese carts won’t fit in to non-Japanese machines (except Korean ones) and Japanese cards won’t work on non-Japanese SMSes (even though they will fit).

Two great sites for anyone interested in the Sega Master System: Sega 8bit (http://www.smstributes.co.uk/) and SMS Power! (http://www.smspower.org/). They both have great forums which are well worth checking out.

You might want to mention how the Japanese Sega Master system is far superior in the sound department due to FM sound which sounds completely different and much better.
The FM unit was an option for the markIII, but the Japanese ms combined the two. fm sound was only for Japan.

Portable sms has to be the most redundant console ever 🙂
Great article!

“Most Multi-Platform Games are Inferior: Despite having a few excellent ports (see above), most games that showed up on both NES and SMS seem to be inferior.”

I don’t know about this though, which games would that be?

@Alex(pre…)
I know the port of double dragon is better on the sms than the nes.Apart from that your probably right.

@Racketboy,Another great article buddy. This console was my initiation into gaming. I never owned one (my first console was a MD2 years later) but my mates and cousins pretty much all did and I played the hell outta em whenever I could.Great memories.

One thing I will add. While the d-pad was rubbish, I always prefered the buttons over the nes. Overall Nintendo gamers definatly had the better pad.

The SMS is a great buy for any MD fan. Games like the SMS versions of the Sonic Series, Donald Duck and the Lucky Dime Caper, Castle of Illusion etc. could have been inferior ports, instead they were completely different takes on their 16-bit cousins.

I think I only had 2 or 3 friends who owned NES’s, the rest had SMS.

SMS is a nice little system for single player games. The controller does suck and you actually have to re-solder the thing to get it to work again if the D-pad breaks. I reccomend just using a Genesis controller if you are going to be playing Phantasy Star for hours.

I have a model 1 SMS as well as a Coleco portable I got on clearance at Target.

I don’t recommend the portable unless you get it for dirt cheap like I did. The emulation on games like Altered Beast is horrible.

Awesome article! THANKS A LOT!

There’s some really great stuff on this site. It’s an excellent source for obscure gaming info. I do take issue with this statement, though –

“Most Multi-Platform Games are Inferior: Despite having a few excellent ports (see above), most games that showed up on both NES and SMS seem to be inferior.”

The NES has its advantages over the SMS but this area isn’t one of them. This is how I would rak the multi-platform games:

not to mention Sega’s own properties:

Monopoly (I never put much time into these versions)
Spy vs. Spy (I mostly played the C64 version; I recall liking the NES one a bit more than the SMS port)
Ms. Pac-Man (The NES one is closer artistically to the arcade but the SMS one has more detail)
Heroes of the Lance (I barely touched this. The SMS looks nicer anyway).
Fantastic Adventures of Dizzy
Batman Returns (they’re pretty different. I wasn’t a big fan of either one)
Lemmings (both seemed pretty downgraded from Amiga but I don’t remember them well)
Rainbow Islands (I recall the NES one having less slowdown)
Rampart (the SMS version seems better than the domestic NES port of the arcade but there was also a Konami version in Japan that was different. I never played it much due to to language barrier but it looked cool)

I’m sure I forgot a few but you get the point. Some of these games are the same in name only, and I’m sure not everyone will agree on each version, but I think SMS easily wins for multi-format games. Even though I think the NES is the better overall system because of quantity of good titles, the SMS deserves a lot more credit than it usually gets.

Not too bad, you have several mistakes there, however. Go check out the sega8bit boys to learn more if you’re interested guys.

Beautiful article! I’m glad to see someone showin’ some love for the Master System. I even found a few titles I need to pickup…

Good article but needs editing for grammar and typos/spelling.

You forgot to mention the SMS converter for Game Gear so you can play SMS game on your Game Gear. Otherwise an impressive article. Thanks.

You really should give Asterix a mention! But apart from that (and the typos lol), another nice article.

Btw, you should remove that Majesco 6-button controller POS and replace it with an image of the original Sega manufactured 6-button goodness. 🙂

I have the power base converter. I bought it because I wanted to play Alex Kidd, but I prefered paying $30 dollars for a Genesis hookup than paying $50 for an actual master system. Also, a Master system related Item this list is missing is the attachment that lets you play Master System games on a GameGear.

Is the Power Base Converter also backward-compatible with SG-1000 games like the Mark II?

The article implies that Sega issued completely orange Light Phasers like they did with Stunners, but actually, they just added an orange tip to some of them:

The master system 1 av output was a multi av out like the snes etc. You can get an RGB signal out of this but no svideo.

Sean – Ninja Gaiden wasn’t a port, the sms version is its own game, and it’s actually really good.

A quick note, you can also use Commodore Amiga joysticks and other periphals on the Master System / Genesis / Atari (and of course it works the other way around – nothing beats playing Turrican with a proper joypad rather than a Competetion Pro)

Racketboy, great article, greatest site.^^
I’m from Brazil and I had a SMS III, and it came with Sonic The Hedgehog on the console hardware. I bought mine in the early 90′, maybe 94, I can’t remember, but I now it was re-released several times around here, till that last one without cartridge slot, together with a re-release of GENESIS, Mega-Drive III around here, with 125 built-in games and without the cartridge slot too, and it costs about U$25 more.

Glad you’ve enjoyed it and thanks for the comments 🙂