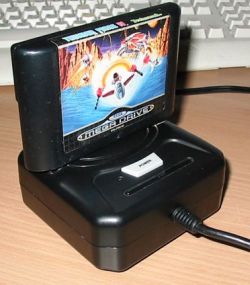 Silver and Kotomi have taken the Sega Genesis/MegaDrive TV Game (like this one on Amazon.com

) which originally only had a handful of games built into it and turned it into what appears to be a fully functional Genesis console. (More pictures of the project here)

In short, Kotami took a Genesis TV Games mini-console (which features a Genesis-on-a-chip) and hacked a cartridge plug/adapter into it. Kotomi’s page is in French, so even with a Babelfish translation, it’s pretty hard to figure out all the details. There was a French message board link with more details, but the thread seems to have been deleted.

It’s too bad because it would be really great to have people like me to just go an do this type of hack without having to figure it out. But if nothing else, we know this is possible and those that are electronically-inclined may be able to figure this out easily.

While this isn’t completely original (Ben Heckendorn has been doing similar, but more complex projects for quite a while), its cool to see some new hacks out on the net.

The next step would be to do something like integrate one of these into another console like a combo SNES and Genesis (blasphamy, I know) or a Sega Saturn or Dreamcast with Genesis “backwards compatability”.

Pingback: Get A Mini Sega Genesis/MegaDrive for $10 - racketboy.com

DS is a handheld device using the emulator picodrive
This is a hardware hack without emulation on a mini console (not a handheld).