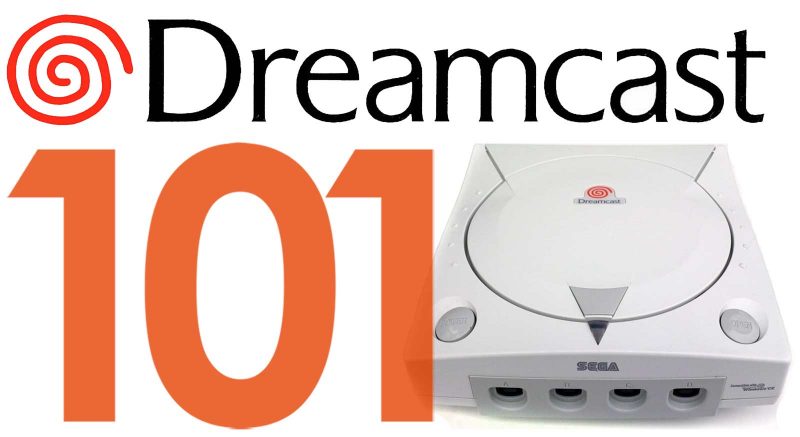 Note from racketboy: Thanks to Ack for helping me me revise and expand this guide (it really needed it).

Can you believe the Dreamcast has already been around for a decade?  (and that it was only on the retail scene for three of those years?)  To help celebrate the landmark, we’ve revised and expanded the Dreamcast beginner’s guide to help those interested in Sega’s little white box get started on their journey.

Of course, the Sega Dreamcast had a number of other controllers including specialty controllers for games like Densha De Go! and other rather innovative items like a  karaoke microphone and a midi cable to hook various musical tools like a drum machine to the console

Emulation Other Systems on the Dreamcast

Emulating the Dreamcast on Other Machines

Ah, Dreamcast.
I will own you, one day, in a few years, if Im lucky. maybe.

Don’t wait Patrick, get one NAO.

The only thing bad about the Dreamcast was the incredibly weak controller ports. I’m currently on my third DC cause the first two had the controller port fuses blown due to merely plugging in a third-party controller or accidentally unplugging any controller while the system is running. The fuses blow very easily

The weaknesses section is ridiculous.
Weaknesses:
-too few games, because of too soon discontinuation
-too few sega arcade ports, should have been way more, easy money
-Sega abandoning it. Could’ve still been strong today, bad management. I wish they had the guts and knowledge to hit themselves over the head about this

Actually that is one point
I vote to remove the weaknesses listed. seriously.
Great article nevertheless
dc has no real weaknesses

There’s no apostrophe in “its” 😛

For whatever reason, over the past few months I’ve been playing more and more classic games through emulators that I either had growing up (NES, SNES and Genesis) or lusted for throughout my youth (Neo-Geo*) and have been enjoying it thoroughly.

That said, I stumbled across Racketboy while looking for good Neo-Geo games and I began to read up on the Dreamcast. Reading about the games intrigued me and I decided to buy one on Ebay ($30 for a perfect console, controller, non-VMU memory card and 3 games – the Dreamcast literally fits every budget…I’m terribly poor right now and it’s kosher for even my budget) and I’ve had an amazing time with it.

The Dreamcast may have died in North America long before its competition, but I think there is an argument to be made that the Dreamcast is as good of a console as the PS2 and a better console than the Xbox.

One of the reasons that I’ve become almost entirely uninterested in the current generation of games is because, for the most part, every game is either a re-hash of a previously successful title (the glut of GTA and Call of Duty clones) or a title based around some boring gimmick. I’m finding that the Dreamcast has a good sized library of extremely well-built and well-designed titles that not only are clever, but are also just *fun* to play…which in the end is what a game should be.

* – I know some people may scoff at bootlegging games and only playing them through emulation, but the fact of the matter is is that even 20 years later, the Neo Geo is still too damned expensive for me, and even just buying the games and an MVS console would be too much.

wow…and there i was thinking that my article, where i went through all your misconceptions might have sparked that new version of your dreamcast beginner’s guide, but that turned out to be wishful thinking, as this write up is still just as error ridden as before. nice work on the small history section, but it should have been something more conclusive and not just thrown in bits of information that don’t lead anywhere, for example an explanation of how the dreamcast took over the place of the saturn and then met its demise would have been more fitting.

lordhebe is right. the dc outputs 480i, or else pc monitors wouldn’t be able to handle the signal. i also agree with D that the weaknesses-section should go. not because the dc has no weaknesses, but because those mentioned are just laughable and are not dc-specific, but so generic that they can be used for basically any console out there (except for the ea one…if you need ea games to live). btw, wireless controllers exist, just no official ones by sega…

Xiaopang, I did see your post, but at that point, this was already done other than the graphics. I did add in some clarifications to counter some of your points as you seemed to misinterpret a lot of things.

I was thinking about doing a forum post or something to counter your blog post as I felt you had far more exaggerations, misinterpretations, and issues in yours than my 2006 post had (which was a quick-and-dirty post as a first attempt at the 101 series) and I just didn’t have time to go into that much detail while trying to get these other posts finalized.

And I find it interesting that you complain about some of my statements above like those in the weaknesses that were actually inserted or expanded on purely to counter your complaints.

When I first saw your comment before I was actually rather excited to see what you had to say as I was getting ready to publish this. I figured you’d help me round things up or something, but I was very disappointed that it seemed to be far off and be looking for problems that weren’t really there (why you went off on PC Dreamcast emulation when I was talking about emulating other systems on the Dreamcast, I’m not sure).

If you have detailed corrections (like the 480i vs 480p thing — fixed and thanks), I’m all for it, but don’t give me vague complains or opinion stuff that comes off as a blatant excuse to complain about someone’s work.

Oh and the one point I felt the need to really defend was the Dreamcast DID have an awesome launch — especially when you consider the US lineup of launch titles. Very few consoles could boast of that.

Also, I purposfully don’t spend too much time on the history and background info. There’s too many existing sources of info for that and I didn’t think it was especially relevant to my current purpose for this series. I linked to the Wikipedia entry and the G4 Icons video that took care of a lot of that — including the transition from the Saturn like you mentioned.

Like I said, I welcome constructive feedback and I tried to clarify things in this revision right before publishing to address some of your previous suggestions, but I stand by everything above unless you can nicely point out some technical errors.

10 yrs ago,Sega’s Dreamcast console was a much-hyped system.It looked like a cross between the N64 & PSX consoles and yet it still got eclipsed by the PSX(a weaker system)in terms of software sales and 3rd party software support.A 128-Bit CD-Rom console(unrivaled in terms of hardware power)got bested by a 32-Bit CD-Rom that was nearly 4yrs old at the time and had a 10 yr production run-how sad?

What was sad was if Sega had just continued the Dreamcast production and support as opposed to abandoning it, then they could have truly profited and Dreamcast would have been a true competitor to the other three. That is would be easily possible if Sega had a better management as I see Sega having the worst management. If they had stayed in the game and continued to make software for the DC then they could have succeeded, but they quit to soon and they lost because of that.

yeah, don’t ever think i never played this system. cuz i have. it looks just like the Nintendo GameCube, only a little bit flatter. the controllers looked nice, with a handheld device going in the middle. the best thing about it , is that it shows digital pictures of the kind of games that are being played. some Dreamcast games are based from arcade games such as, House of the Dead 2, Soul Calibur, Virtua Cop, and Virtua Fighter.

awesome! gonna buy an adapter on the store on the top now. just bought a dreamcast from http://www.sonicloot.com , but i didnt see that it was without that f adapter. great that i stumbled upon this!

Wireless controllers do exist for Dreamcast. They are just hard to find and quite expensive. Especially nowadays…

9/9/99 Oh I remember that day quite well. everyone in my high school were hyped about the Dreamcast.

The Dreamcast to me was the golden age of gaming. Creativity in the industry at it’s peak.
I swallowed their content like meatloaf.

When the “death” of the Dreamcast was officially announced, I literally shed tears. I was so emotionally invested in this console. The year and a half waiting for Shenmue and finally opening it on release day. The epic 15 person Soul Calibur tournaments my apartment would host (lasting for days as people would join and drop off). Actually running the 24 hours of Le Mans starting at 4PM on June 24th (got dark at the same time as it did outside and light again…finished 10th by the way). The perpetual grind around Shibuya Terminal. Hoverboarding through a building. Seeing my defensive lines breath as my D-men shuffled up to the line of scrimmage showing a blitz. Leading the Colorado Avalanche to a 4-3 win against the Detroit Redwings in overtime and having 4 people watching all stand when the goal went in. Blowing up my friends airplane with my helicopter over the dining room table. Making fun of the wannabe Will Smith tracks in MSR. OMG this is what driving a Ferrari is like? Finally being drunk enough to really whoop some butt. Are those Tony Hawks ears? Running from the angry orca destroying the bridge. “Take me to Pizza Hut”….”yeah yeah yeah yeah yeah”. Putting Tito Ortiz into a submission hold. Up Down Up Down Chu Chu Chu.

So many great memories with this console.

I remember being a part of the Dreamcast Technical Pages. The first forum I was ever a part of and to this day, the best.

It even shaped my future console purchases. I chose an XBOX over the Gamecube because of the Project Gotham series and Jet Set Radio Future.

Thanks to NHL2k5, Panzer Dragoon Orta, Otogi, and other great exclusives I greatly enjoyed my XBOX, but now for me is the Gamecube’s time to shine. Especially since it’s version of Crazy Taxi still has the original music

I’m ordering Strumwind!!!! This console is still alive to us die hard gamers.