Note from racketboy: Special thanks goes to Scooter for putting this guide together!  The RetroGaming 101 series is aimed at gamers who are just starting out in the classic gaming scene or are curious about an older console that they don’t know much about yet.

After Sega established a strong lead in the console market in the early 1990’s, the company saw the possibilities that the new CD-ROM format could bring to gaming.  Sega produced the Sega CD add-on for the Genesis to bring the technology to the many Genesis owners around the world without requiring them to invest in a completely new system.  Unfortunately, they did not completely follow through with their vision.  Even though it was not a commercial success, that does not mean that a Sega CD isn’t worth picking up for a reasonable price to expand on one’s classic Sega collection.  The Sega CD is still an interesting piece of hardware and has some games that are still worth checking out. 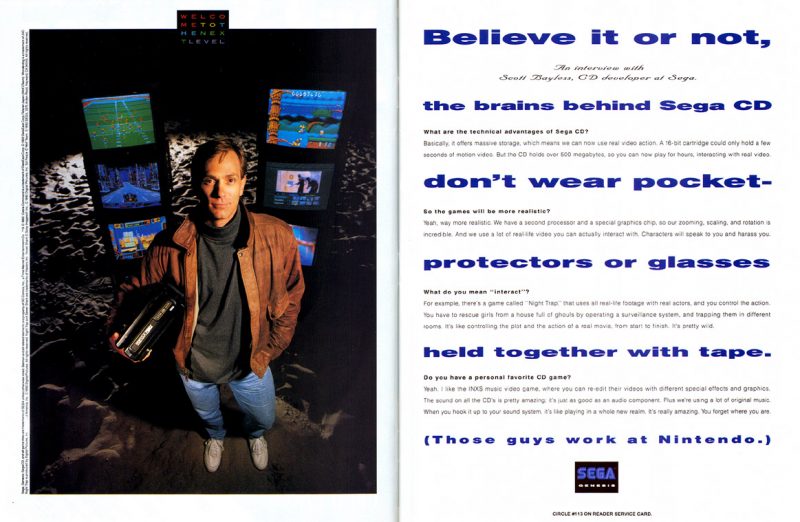 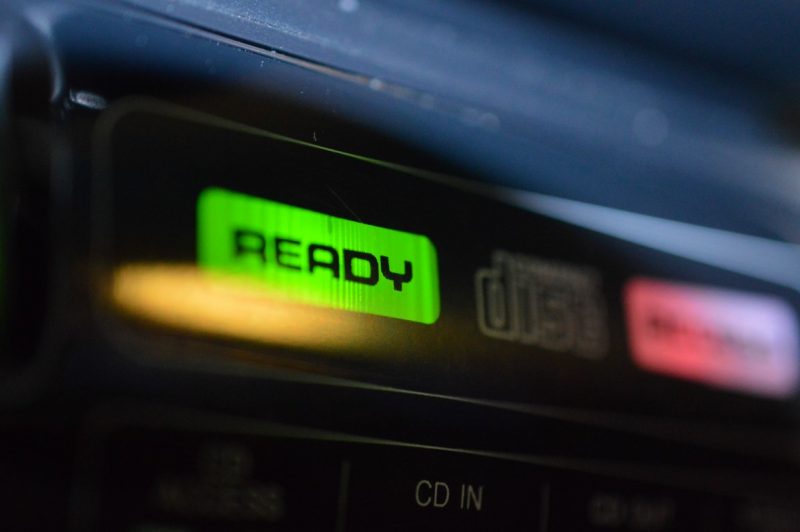 Some Sega CD games were compatible with and even a few were packaged with a light gun.  A number of such light gun capable games combined FMV with light gun use.  The light guns required were also compatible with similar Genesis cartridge based games.
Check eBay for Sega Light Guns

Hooking Up The Sega CD

Nice job guys! I was waiting for this article. It hits almost everything. It would be good to have a link on how to replace the back up battery, which in most model 2’s, die. It’s pretty simple to do, and neccessary to save. Even if you can find or afford the back-up genesis style cart, having the time and date pop up everytime is quite annoying.

Some into on digital press:
http://www.digitpress.com/forum/archive/index.php/t-12795.html
Sadly, I couldn’t find anything with pictures.

Also, more info on emulating on MAC’s and buring back ups would be great. I’ve asked around in the forums, but I’ve not found much info. I’m guessing it’s either not an option(emulating or buring .bin/.cue roms)or maybe not done too often. Any other info would be great.

Thanks for this, I stopped buying Sega products after the Genesis. This will help me catch up now 🙂

Note that the bulk of the Snatcher CD images out there are in .mp3 format that can only be played on emulators. If you try to play it on an actual Sega CD it will work up to a point but you will be missing a lot of audio and it will lock up.

If you want to get a copy to work on the Sega CD you have to use the .cue sheet and instruction found on the Home of the Underdogs website. Basically you have to use Winamp to turn all the MP3s into .wav files.

It’s a pain but I suppose a lot of people don’t want to bother playing games on the actual system they came out on.

I personally think playing Snatcher on a console is a much better experience.

Oh and when you get older Sega CD systems from garage sales it’s a good bet that the contacts between the Sega CD and Genesis will have corrosion.

9 times out of 10 this is whats happening if someone thinks the system is “broke”.

This seems to happen more when you have a model 1 genesis hooked up to a model 2 Sega CD.

The Sega CD manual even says to clean the contacts with an eraser, so they knew it was a problem! 🙂 I should point out that the majority of the time the problem with “broken” Sega CD systems is the fuse. Surprised it wasn’t mentioned in the article.

You realize the posting you replied to is over 10 years old, most likely will never see it! For Sega knowing about the problem is correct, but not in some nefarious way that you are thinking. The truth is that copper is the main source of material used in the electronics industry for PCB’s, the traces and contacts that send the electrical current. And over time, due to moisture, air and heat, copper will oxidize. The oxidation is call patina and creates a film over the copper and reduces the ability to make a complete circuit! As for the reason why Sega mentions how to clean the contacts in the manual is most likely due to the reason given above and using an eraser is the best way without damage to the contacts.

I was perfectly aware that the record hadn’t been set straight in 10 years. That people are still finding this *undated* article 10 years later and still not seeing that fuses are, by far, the main problem is even more reason to correct it.

I read through the article and saw prices and other things where the date it was written were kinda needed for context but I could only find dates in the comments. It appears to be a hub article that was probably updated as the linked articles were added. It could probably use another update and it would be good if the update includes such information.

I wasn’t implying anything nefarious from Sega. I’m saying that this advice about cleaning the contacts with an eraser is part of the official setup instructions. Not everyone has the original manual.

Thanks for the info! The person should still get an email alert unless they have a different address now. But it is nice to share info.

I will plan on updating these guides over time as well and it’s always nice to be able to incorporate suggestions from the comments.

Excellent article… AGAIN. Net time I can go to my local Flea Market, I’ll keep an eye out for one. Too bad I can’t buy one… I have about -$36!

RacketBoy, great job on the article. I have been on a Sega kick lately, working through some Genesis games I wish I’d played back then, and now I’ve got the chance. I had been very confused about Sega CD/Megadrive/Saturn, and this cleared it up quite a bit. I’ve been contemplating getting a 32x or a SegaCD for a few months now.

The pictures you posted were especially helpful. I really wish the Sega CDX model was more available, that one looks very awesome.

Great work with the site, look browsing articles of this nature.

All thanks should go to Scooter — but glad you enjoyed it!

Scooter, I would want to see verification in some fashion of the following:

“While the Sega CD was not the first unit to bring optical disc technology to a gaming environment, it was the most widely distributed unit in its day.”

So is the Sega CD region locked?

As in, can I buy US games and play them on a PAL system? I’m assuming no.

Yes, the Sega CD is region locked to a point. It requires extensive modification to play a PAL game on an NTSC system. Japanese NTSC-J are easier, but you still need a few things.

Don’t forget that lovely little fuse buried in the hardware that makes the system die when it blows. At least the sucker is cheap…

I picked up a combination Genesis MK-II and SegaCD MK-II for 40.00 bucks on eBay, because the guy didn’t know how to fix that fuse (or that it existed, for that matter). He used the wrong power adapter for it.

i didn’t even know they made a sega cd till i visited this site, but i do know that sega was the best when i was little. i use to love playing sonic the hedgehog on there.

I’m just starting to get into Retro Gaming( thank’s racketboy for the great site, even if it made me spend way to much money on classic games 😉 and bought myself a German Sega Mega Drive + Sega CD. I know that you can’t use it to play NTSC games(without modding the console) but is there a region lock for other European countries like the UK, if not than SNATCHER for the Sega CD it is!!!

I recently got back into the sega/sega cd when my mom cleaned out her garage and told me to come over and pick up my stuff. I had forgotten that I even had a sega genesis, sega cd and sega 32X. The only bad part it seems is I can’t find the rf unit and I’m missing the power brick for the sega cd. I’ve been looking online for these items and for some old sega cd games I missed the first time around and found that these items are booming. I’m trying to get these items on the cheap. Thanks for all the info. Love the site.

Well best of luck on your search… the Sega CD has some great titles on it. and glad you enjoyed the post!

I just picked up a Sega CDX off Ebay. I forgot how much I really loved the Sega CD. I owned model 1 and 2 Genesis and Cd when they came out when I was young. By far the Sega CDX is the coolest of the three. Its small and portable and its both combined into one. I haven’t stop playing it since I got it and i bought some games to. I hope someone will com out with an emulator so you can burn Genesis and Sega CD Roms to disk and play them on the Sega CD. That would be awesome.

1st thanks for the site info on sat and dreamcast has been very helpfull. Now i find my self with problems, got a mega cd top loader with mega drive II but no cables mega drive cables are easyly found (but about the same price as a new mwga drive)but the mega cd needs its own DC10v 1.2A power surply. I found one with the same stats and conections on a spare cable broadband rooter . i have pluged it in but no red light on the mega cd dose it come on without mega drive atached? and i heared about a fuse inside theat meay have blown i opened it up but cant see one . any help geting me goin or on where to get the rite power adapter please

I don’t think the metal plates are a requirement. The just help keep things together in case you bump the console around.

If your Sega CD has been sitting unused for an extended period of time, you may need to recharge the Sega CD’s internal battery.

Plus, this article has missed another Sega CD system: the Pioneer CLD-A100 LaserActive LaserDisc player with the PAC-S10 Sega module.