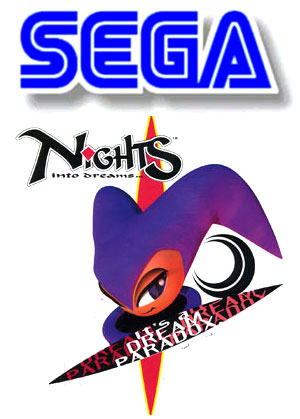 Every now and then, Sega asks its [remaining] fans to see what franchise or character it should focus on for future game development. The last time this happened, Sega fans said they wanted a game based on Shadow the Hedgehog. And Sega, bless their hearts, delivered a Shadow the Hedgehog game — whether we liked it or not.

This time around Sega is focusing more on forgotten franchises as opposed to characters from the Sonic Universe. The franchises you can vote to see again are

Before I go any further, where did Flicky come from? Unless there is some sort of cult Flicky following in Japan, why even bother putting it on the list?

Anyway, I’m pleased to the other options on the list, but I could have also added a few others.

My personal vote would go for NiGHTS into Dreams. I think it is the one older franchise, Sega or not, that could benefit most from a modern console. I just hope that the remains of Sonic Team can still do it justice.

Samba De Amigo would be my second choice. It would obviously would be a perfect fit on the Wii. Two Wii-motes would make ideal maracas. Without having to buy specialty controllers, I think it would fare much better than it did on the Dreamcast.

As much as I loved the old Streets of Rage games, I think with Sega’s recent track record and the over abundance of fighting-style games, it would just get lost in the crowd.

Virtua Cop would also be nice, but then again, I would settle for a Wii port of Virtua Cop 3.

As I mentioned in previous posts (see Games That Actually Need A Sequel and Franchises That Need A Resurrection), Sega has a number of other franchises that could be easily added to this list such as Panzer Dragoon, Jet Set Radio, Shenmue, Skies of Arcadia, Comix Zone, Shining Force, and Vectorman.

Which one do you think should see a sequel or remake from Sega’s list? And which ones should they consider next? Let me know and Go Vote Now!

Related Posts:
Sega’s Surprising “Twist” In The Works…
How Sega All But Ruined Sonic the Hedgehog
How Sega Can Bring Sonic The Hedgehog Back To Glory
New Nights Into Dreams Coming To Wii?
Games That Actually Need A Sequel
Franchises That Need A Resurrection

Why can’t they do both a new NiGHTS and a new Samba? What, are they too busy working on a cure for cancer over at Sega to bring back more than one of their beloved, neglected franchises? They spend so much time, effort and money on their multitude of crap-ass Sonic-based games, you’d think they could easily shift those resources over to games that their fans might actually want to play.

I thought the same thing.

Yeah, the inclusion of Flicky is rather puzzling. I think that Alex Kidd would be a nice choice. As I already stated before, though, I’ve already voted for Streets of Rage.

By the way, if NiGHTS does happen to receive a new installment, I hope to God that Sonic Team isn’t handling it. I’m sorry, but that development team simply doesn’t have the magic that it once did. They seriously need to gut that team and start from scratch.

Sorry but this is going to be a rant post:

1. I wish Sega didn’t revive any of these franchises, or do anything at all.

2. Should I need to choose one from that list I’d go with SoR thou I bet Sega would screw it up.
But if I could I’d obviously choose Shenmue Complete (the whole 16 chapters.

3. Flicky? WTF? That game was worthless… no more wine for Sega staff.

5. From the other Sega franchises you mention only Jet Set Radio and Shenmue deserve a sequel. I dislike Panzer Dragoon, Shining Force, and Vectorman, and I think Skies of Arcadia and Comix Zone are true classics and shouldn’t be touched again, especially by Sega’s filthy hands.

I will buy whatever system the next NiGHTS might be published on … well, okay, unless its completely screwed up.

I guess the comments saying that old legends should remain old legends is with merit. The fact that we question sega’s ability to make a solid game is a scary thing.

*side note* I am glad to see such a large amount of content continuing here on racketboy. Keep up the excellent work!

Damnit, why must I be forced to choose between Streets of Rage and NiGHTS?

Sadly, I have less than zero confidence in Sega’s abilities these days. I want to play NiGHTS so bad, but I know they can’t possibly make a new one without borking it up, so let’s compromise: port! I don’t personally know a single person who owns a Saturn, or has ever owned a Saturn, so there’s a huge market for reselling that. Why don’t they stick the original (great) game on DS, where pixelated graphics don’t seem to matter? Of course, maybe they can’t even handle that either, judging from the Sonic port on GBA. But please try!

Also: why must Streets of Rage always get neglected on Sega bundle discs? Surely they must realize there’s no point in making a new SoR now, the game is an intrinsically 2D game. 3D would ruin it. What would they release a 2D game for? [/me scratches chin thoughtfully] You know, Sonic Rush was pretty good…

In short: I think Sega should limit themselves to DS and MAYBE Wii. They can’t seem to handle anything big and complicated, so stick to the platforms where simple fun games sell well.

I choose Nights, one of my favorite games; i would like Sega could do the remake of Panzer Dragoon Saga, to show how wonderful was take game.

I hope Sega will bring Nights to the Wii since the wiimote seems like a perfect fit for the gameplay.