Even though the system only comes with a standard 2 controller ports, the Sega Saturn is one of the best multiplayer systems of all time. With the help of two Multi-Tap accessories, you can have up to 10 — yes 10 — players at the same time on supported games. With the Multi-Tap, you can connect an extra five controllers to a single port. And, of course, if you have two Multi-Tap boxes, you’re good to go with 10 Players.

My buddy Slinga over at Sega Xtreme compiled a list of the Sega Saturn’s multiplayer games a while back and I am expanding upon that in order to provide a more complete guide for Saturn owners. Here is the rundown: 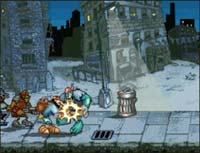 Three Dirty Dwarves
This quirky side-scrolling beat-em up is best described as a cross between Streets of Rage and Toe Jam & Earl. While that description doesn’t really do it justice, TDD is a action games that is full of laughs. The variety of attacks and ease of execution of these moves makes the game accessible for even casual gamers. There are also some very unique stages found in Three Dirty Dwarves, which keep the game from becoming side-scroller monotony.

You play as three sports-crazy dwarves are on a quest to save some children from the mysterious enemy. Instead of having a traditional health meter, if a character is hit by an enemy he becomes unconscious. A conscious player then needs to whack the stricken character and you regain the ability to use him. This is a unique device, but in the midst of battle it’s hard to keep reviving your fallen characters. If all three of your dwarves are unconscious, it’s Game Over.
Full Review of Three Dirty Dwarves 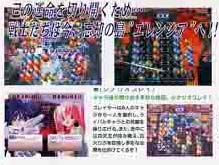 Noon
Noon is a multiplayer puzzle game that allows up to four players. It takes the overhead gameplay style of Bombermen and mixes it with standard puzzle style gameplay. Your goal is to cover your opponents playfield with bombs.

Bombs are made by connecting a row of three or more balls and attacking them, causing them to “explode” and reappear as bombs on your opponents playfield. This is called a NOON. There are five different colors: Orange, Yellow, Green, Blue and Multi/Rainbow. When lining up the balls, they must all be the same color. The lone exception being the multi color, or rainbow balls which you can mix with any one of the other colors. Rainbow balls are key to Rainbow NOONs. These are like regular NOONs only when the Rainbow Ball or balls explode it will make adjacent balls explode as well, regardless of color.
Read more about the game at GameFAQs

Winter Heat
Winter Heat is an enormously entertaining and polished Olympic-type sporting game. The control system for Winter Heat is very simple. It typically consists of rapid finger tapping of one button. But this is not a bad thing, nor does the game lose any amount of fun because of the simplistic controls.

Fire Pro Wrestling: 6 Man Scramble
This installment in the fan-favorite wrestling series is fabulous and can be a blast with friends. The controls are very easy to learn. You can go for several titles, have barb-wire matches, a Battle-Royal, six-man tag and even a UFC octagon.

This game is a must buy for wrestling fans. They covered just about anything you can think of, with only a few exceptions. You can play this game for hours at a time, and not get bored. Everytime I play I always see something new. You can even knock out the ref, put your opponent on the top rope and perform a move on him.

Guardian Heroes
This cult-classic game is a unique beatemup with strong RPG elements. It is definately one of the best Saturn games out there, but the story mode only supports 2 human.players but has about 50 branching paths, customizable character attributes like strength, intelligence, vitality, and luck. To have all 6 players at once, you have to use the Multiplayer mode where you can be any of the game’s 45 characters — but this leads to an unbalanced fighting experience.

Attacks are performed by various button presses and Street Fighter-esque circular motions, and you can block! The levels often scale, zooming out and shrinking the sprites to follow the action, and the 2D animation is (in a word) FRANTIC! So much is going on that you at first may be overwhelmed! The sprites themselves are in a simple graphic style, sometimes a bit blocky when zoomed in close. Thanks to it’s Fatal Fury-style 3 planes system, the game keeps a lot of the depth of most 2D fighting games (thus the fighting does not get repetitive!) while keeping the fanticness and carnage of the scrolling beat-em-up’s have (so you don’t get bored!).

Death Tank (One)
If you looking for some no-nonsense 2D action, take a look at the Death Tank games. These game were originally only availible as Easter Eggs in the Saturn versions of Duke Nukem 3D and Exhumed, but Djidjo has ripped them and made them availible as standalone games. (The old link I had doesn’t work anymore — I’m trying to dig it up)

The gameplay style is similar to Scorched Earth or the Worms series — only in real-time. The graphical style is extremely simplistic, but the gamplay is pure fun.

Death Tank Zwei
Your goal in Death Tank Zwei was to destroy the other players using weapons that you have purchased for your tank. There was one problem though — everyone has the same objective and can attack whenever they want… nothing, not even worms come close to the excitment that this game brings.

After each round you can take the money you won (by demolishing your opponents) and stock up on weapons to use in the next rounds.

Street Racer – It’s not a bad game, but it is a bit shallow and the graphics get ugly in split screen modes. 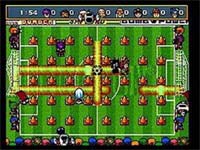 Saturn Bomberman is probably the most intense of all the Multi-Tap games — especially with outside interference\beyond the grave bombing on. I was hoping Bomberman Online (Dreamcast) would top this Saturn version — but you just can’t touch it. This version of Bomberman skips the isometric and 3D formula that newer ports had and focuses on 2D action. I must warn you though — with 10 Player action, you may want a decent sized TV 🙂
Full Review of Saturn Bomberman

There are some games that are missing from this list, but they are mostly generic sports games — most of which I don’t have time to go over yet.

What is the code to play Death Tank one on exhumed and/or powerslave? Did you find the link of the ripped game?

I have no trouble playing Death Tank Zwei, but I was just curious to see what the original was like.

Not sure if there is a code or not. I know there are ripped versions out there, but I haven’t found a working one lately….

Thanks for the quick response! Well if you find anything on this, feel free to post it here.

And by the way, thanks for this great site. I am originally a PC Engine fan and was brought to the Saturn because of Saturn Bomberman. I had a great time with the 3 versions of Bomberman on the PC Engine, but the Saturn version is so amazing (But I still play the PC Engine when I have 5 players or less… Because I enjoy the not to have to set a ton of options and have no loading time). I’m glad I can use this site to fill my lack of knowledge of the Saturn. Thanks to you, I now have a nice little collection of multiplayer games that make for great retro gaming parties.

Keep up the good work

Glad you enjoy it! Feel free to stop in the forums — we’d love to have you aboard 🙂

Wow great list, I just ordered worms for the sega saturn, does this game support the multi-tap or do you have to keep passing around 1-2 controllers to your teammates? As for Death Tank can you provide details on how to activate them on the games you mentioned or like the first poster, how do you even get a ripped game to work on a un modified saturn?

I haven’t played Worms on the Saturn, but I know the Dreamcast version has you pass the controller around. I wouldn’t be surprised if the Saturn version is the same way.
It lets you have lots of players without having to invest in more hardware.

How decent are all the games on this list? For example, I hear that Space Jam is freaking awful, but if someone out there enjoys it I may be willing to give it a shot. I just don’t wanna buy BAD multi-tap games.

Obviously, I don’t doubt most of the choices here. Just wanna make sure.

For the most part, I would stick to the ones with the screenshots and longer text. Those ones are good.
The rest are kinda filler.

I want to add games that are not mentioned.

And probably other versions of these titles. Regards