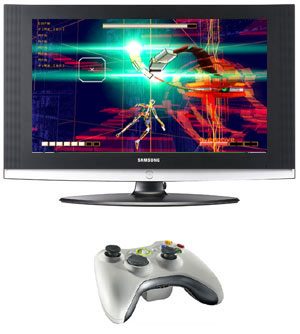 Electronic Gaming Monthly (EGM) shared the strong possibility that Rez, a cult classic on the Dreamcast and PS2, will be coming to the XBox Live Arcade.

The rumor section in EGM has a relatively good track record, so I would not shake this rumor off too easily.

No additional information is available just yet, but if this is true you can rack another modern classic for the XBLA that the Virtual Console can’t touch.

Surprisingly, I would actually rather see Rez come to the 360 more that a couple of games on my XBox 360 Wishlist, but I didn’t think it would be as much as a possibility.

Keep in mind this is from the April issue. Also, There would be some trouble whether or not Sega or Q Entertainment would release this. Seeing as how Sega’s previously shown XBLA (Sonic) has been a no-show for over a year, add to the fact that they’ve been focusing only on Wii’s VC at the moment, take this with a very, very small grain of salt.