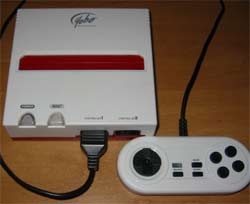 When it comes to NES clones, many of us are familiar with Messiah’s Generation NEX. However as I mentioned a while back, the Yobo Gameware (aka Neo-Fami) is another solution to playing your old NES carts.

Kevin over at UUDDLRLRBAStart recently posted his review of the Yobo NES Clone.

“So far I’ve been fairly happy with the Yobo, the price was great, and for the most part every game I’ve thrown in it has played faithfully to the original NES. I did notice a couple of stuttering issues with a couple games, but it was only when there was a lot of action going on the screen, and it did not seem to effect the quality of the gameplay for me.” (Read Full Review)

So it looks like the Yobo Gameware is a solid contender in the NES Clone market, but I would really like to see more detailed compatibility reports for both it and the Generation NEX.

Make sure to read my original post about the Yobo device to get a better feel for how it compares to the Generation NEX.

I just baught one 2 nights ago and it works suprisingly well .. i was skeptical when i saw it ..(i’m not usually one for imitations..) but the price was right so i picked it up with super mario 3. the only problem i had with it was on my other tv which seems to play my xbox and ps2 just fine, had sound problems which kept coming in and out almost as if the mute button kept being pushed on and off at certain times..(meaning i’d get no sound what so ever).. i thought my unit was defective but when plugging it into our main tv it worked just fine so it must be an issue with just that tv..

other than that great buy and seems to work better than the nes (toaster box) that i used to have. doesnt have the annoying flickering that happens when a game doesnt work, everything works fine. (with exception of problem listed above.)

Just bought mine and set everything up, the power comes on but nothing comes up on the screeen

Have your tried contracting the vendor?

Feel free to post the situation in our technical support forum as well!

We just got one off the internet and hooked it up and the games work fine.. and these were games that were hiding under my bed for a couple years too! it’s great to finally be able to play them.

I just bought a Yobo NES clone and I love it! Other people are going to tell you it produces poor sound quality, they are wrong. I thought the sound was bad at first (the bass notes in particular) but after cleaning my game cartridges the sound became much clearer, in some ways clearer than an original NES. It is light weight but that isn’t bad when your on the road a lot like me. The only games that I’ve had problems with are the TMNT games and Castlevania. It’s probably the best 25 bucks I ever spent.

I’m having the same problem as “Anonymous”. Plugged everything, power comes on, but all I get is different colored screens. Everytime I restart, I get a different color – green, peach, maroon.

Can’t contact the vendor because they only give a fax number & I don’t have a fax.

I bought one of these two years ago and it just stopped working recently. When the power is turned on it just displays static and hums. I’ve tried cleaning the system and the games but that didn’t help at all. It was fun while it lasted and only cost $20 but I’m not buying another one.

I’m having the same problem as “Anonymous”. Plugged everything, power comes on, but all I get is different colored screens. Everytime I restart, I get a different color – green, peach, maroon.

Can’t contact the vendor because they only give a fax number & I don’t have a fax.

I have a NES clone ,but I bought from China directly . very cheap and console works very well .www.ncechina.net

Can someone please help me. I bought this NES yobo system plugged it in and the games would show up hazy. After first putting in mario/duck hunt (which showed up hazy), I turned the system off and put in Double Dragon but after putting the cartridge in the system wouldn’t turn back on! =(
So we tried many different things to try and make it work but so far nothing.
Does this system have a fuse that could have blown? Does anyone have any answers or similar problems? please e-mail me if you possibly know what is wrong!

I just picked up a Yobo system from Play N Trade. So far, I’ve tried Super Mario/Duck Hunt, Castlevania 2, and Chrysalis. All games play fine but the sound doesn’t seem to be correct for me. It’s very similar to lingeek2k’s situation. The game music seems to come in and out, and sometimes it sounds glitchy. Haven’t tried it on a different TV.

I bought a US silver one of this, working great. Even my old Zapper and Game Genie respond fine.

The sound is different in certain cases, but not overall better or worse. Tends to be softer pitched. Which is nice at times, as a few NES games were annoyingly sharp.

Only one I tried that just didn’t boot up was Castlevania 3. It’s a known issue with many clones however. Not too important as I’d bought this for other games.

So, the Yobo is a fine basic system. Solid enough to handle most USA titles. Import gamers or those who absolutely must play Castlevania 3 might want to look at other models though.

hello i just got the fc twin and i cannot get a zapper gun can u tell me where to get one.thank

Do the original NES Max and Advantage controllers plug into this? And if not, are there similar controllers for this unit?

Yeah, I’m pretty sure any NES controller will work on it…

Has anybody had any trouble loading “Ultra Q-Bert” on a Yobo console? Just got it from ebay and it does nothing when the power is turned on – black screen.

My YOBO NES Clone was broken as soon as I opened it up.

Im having the same problem as a few prople with my YOBO NES CLONE system. It turns on but the screen is just a solid colour. Everytime i turn it on the colour changes. Does anyone know what to do?

I just got one of the Yobo NES clone, same as the picture. The one problem I have is that the games are VERY hard to put in and take out! I don’t understand it. It’s like the pins are over tightened. Any suggestions???

the best way to play NES games is with the NES of course!
it´s pretty darn easy to fix the typical 1hz blink/reset problem.
you just open up the NES take out the black connector and with a small screwdriver or a safety pin(What i used) and bend the contacts a bit up, and while you are at it, locate the CIC chip(Causing the 1hz blink) it´s labeled U10 on the NES mainboard, and cut pin 4 clean off, and you have a machine that will play most games 🙂 i did this and it works GREAT.

I was thinking about buying one myself. I think alot of the problems might be from old games that haven’t been played. You stick a dirty game into a clean system you instantly get a dirty system, which is what alot of the problems sound like. Clean the game before you try it. The problem could also be that they are chinese knock-offs. Thanks

same problem as jason, just got one, brand new, and I can’t even get the games IN, it looks all right, but I’ve been pressing so hard I think I might break it, but it won’t go in! Don’t have a SNES or a NES or anything else to compare it too, but to me the pins inside arn’t “bent” so it’s physically impossible to get games in, what can I do?

Same problem here as Jason. The games are requiring way too much force to plug in. The socket just broke off the supports inside the console. Game was cleaned first, tried several games.