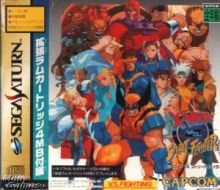 X-Men vs. Street Fighter was Capcom’s first crossover fighting game and it caused quite a stir during the time of its release. As a child of the 80’s, I was raised playing Street Fighter 2 in the arcades during my early teen years and later moved onto the Street Fighter Alpha series and X-Men: Children of the Atom. So when X-men vs Street Fighter made its way into the arcades, I was mesmerized by how radical this new installment felt.

In this 2D Fighter, the Street Fighter characters team up with X-Men in a two-on-two tag-team battle of intensive chaos. The game’s characters play somewhat like their previous incarnations, but virtually every move — from jumps to special combos — have been super-sized.

I can still remember the first time I played XMvSF in the arcade — I had so much more adrenaline pumping and my arms literally felt like I just went to the gym for a workout. (Of course, now that we have had a number of similar VS fighters since then, the novelty seems to have worn down).

Possibly the best example of how the Saturn was the place to go for arcade-authentic 2D games, X-Men vs Street Fighter took full advantage of the 4MB RAM cart in order to keep the tag team action quick and seamless in addition to minimizing load times. The sprites were as big and beautiful as the real Capcom arcade version.

If you try playing the Playstation version of the game, you will quickly realize how limited the Playstation is in terms of 2D action. In fact, as if the less-impressive sprites weren’t depressing enough the PSX doesn’t even offer the tag-team feature — one of the main selling points of the game. 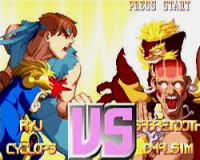 Graphics/Presentation: 10
From an artistic standpoint, X-Men vs Street Fighter is both colorful and bold. As I mentioned before, the game builds on the foundations of Street Fighter Alpha and X-Men COTA, mixes them up, and gives it a more dramatic flair. I would still argue that X-Men vs Street Fighter is more visually appealing and fluid than Marvel vs. Capcom and just about every other Vs. fighter that followed it. The later games seem more thrown together and not fresh and polished like XMvSF.

Thanks to the Saturn’s 4MB RAM cartridge (which is required to play the Saturn port), every frame of animation has been accurately reproduced, and all the backgrounds look sharp and detailed. Just as important is the seamless switching of characters, with no momentary lapse of action as was the case in earlier Capcom efforts.

The character movements are smooth and fluid, which is evident from the realistic way that they breath and flex their bodies even when standing still. From a graphical standpoint, the Saturn port is virtually indistinguishable from the arcade original.

If you’ve ever played Marvel Super Heroes on the Saturn, you know how long and excruciating load times can be on some Capcom fighters. Well, thanks again to the RAM cart, load times have disappeared on X-Men vs. Street Fighter. Sometimes this feature alone is enough to make you forget that you’re playing on a console and that you are playing at the Arcade or a MAME machine. I would have to go back and do some testing to verify this, but I think the load times are even better on the Saturn’s port of XMvSF than Marvel vs Capcom on the Dreamcast or PS2. 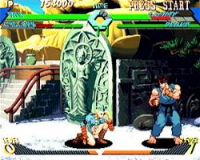 The graphics are not the only thing that was preserved well on this Saturn port. The audio quality is also well done — unlike some other Capcom ports. There is not any tinny speech and sound effects like there is in Marvel Super Heroes. Instead, X-Men vs Street Fighter’s audio is all very crisp and clean sounding. The music is mostly remixes of existing Capcom fighters — enjoyable, but nothing special. The Sabertooth, Gambit, and Rogue tracks are the only original pieces in the game.

Control: 8
As usual the control is almost virtually flawless on the Saturn pad (which just happend to be one of the best standard controller for fighters) and even more so on the Virtua Stick. As with most older Capcom games, controls are very tight and responsive.

It is worth mentioning that you can assign 3 kicks or 3 punches to either of the shoulder buttons. While this is great for newbies wanting an easy way to do some combos, it can lead to button-mashing and take away from some of the challenge.

Gameplay: 9
Most 2D fighting fans are probably familiar with the basic gameplay concepts. However, X-Men vs Street Fighter was the first game to bring the tag-team element to 2D fighters.

This element deepens the gameplay a bit, since it allows a player to bring a healthy fighter into play when his other hero is getting low on health. Furthermore, injured, tagged-out fighters can partially recover health off-screen. And once your super bar is fully charged, both characters have the ability to combine for an awesome team attack. 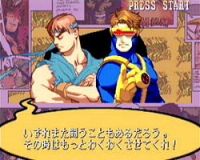 The tag system also allows you to have a bit more variety and strategy by choosing two of your favorite characters instead of one. You could choose a brute like Zangief of Juggernaut to work with a projectile maniac like Cyclops or Storm.

Affordability: 6
This is a Japan-only release for the Saturn and isn’t the most common title. It usually fetches between $20-40 depending on how complete you want it. The “most complete” package will include an extra cardboard box and a 4MB RAM cart. I personally just bought a “complete” jewel case, manual, and game disc. I already had a RAM cart, so I saved a little money.

So, if you are looking for the most balanced and enjoyable Vs. fighter but don’t mind having a smaller character roster, X-Men vs. Street Fighter is a great place to start.

I know this maybe a little late but I was cleaning out my basement and found my good ole’ saturn (box and all) lying around. I decided to boot it up to see if it still works. My favorite game was Xmen vs. Streetfighter and i have the japan version but a ntsc saturn. I had a separate 4mb action replay but i can’t get it to work. i keep getting something along the lines of unusable disc in the system’s menu. i know it worked before when i first got it (about 10 years ago). i replaced the battery in the system and tried again (as some other posts suggested) but it still didn’t work. is my replay card dead? seeing as you have the most knowledge on this game and the system, any suggestions on how to get it up and running again? much thanks for any help you can offer.