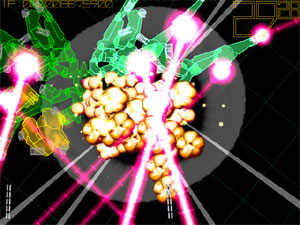 Note from racketboy: Ivo is back again with a remarkable review of an interesting Freeware PC shooter by the name of Warning Forever. I hope you find it enjoyable!

There are a number of excellent freeware games available for the PC, and Warning Forever is certainly one of those. You can download it from the creator’s website (which also has other good freeware games). The self extractor file is so small you could fit it twice in a single floppy, so there’s really no reason why you shouldn’t just try it (even if you are on dial-up!).

Basically, the game is a shoot ’em up with a number of interesting twists: 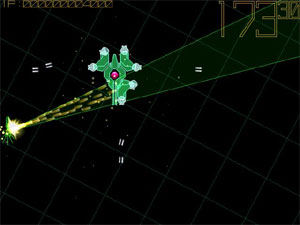 The game’s (vector) graphics are rather simple, and they definitively perform their role. As you can readily see from the screenshots, the graphics won’t distract you from the action, and you are able to keep track of what is going on: which pieces of the ship you are hitting and so on. I personally am fond of the particular graphic style, although this is subjective; I find them to have a certain artistry to them. They’re not gorgeous (like Ikaruga, for example), but they don’t need to be.

Sound/Music: 6
The weakest point of the game, but one that doesn’t really affect things much either. The sound is rather basic, and I personally dislike the warning klaxons at the start of each level. I understand why they are there and they communicate the constant boss fight feel of the game well, but I find them to be very annoying. That sort of stuff works better in a regular shooter as you only have a boss every once in a while. The music is o.k., but nothing to praise.

Gameplay: 9
The gameplay is really excellent, much better than many commercial games.
In my opinion, you should think of this game as a combination of a score attack and a time attack game. You can use the options to set different types of game, all of which have quite significant dynamics. The “normal mode” I already discussed, is essentially a time attack where you lose time each time you’re destroyed and get bonus time each time you destroy a boss. There is also a standard mode where you just play with finite lives and get extra lives each 100 pieces of boss destroyed, a “sudden death” mode with 1 life and no extras, and a pure 5 min time attack mode where you don’t lose time when you are destroyed but you also don’t get bonuses. And you can also build your own mix & match mode if you want.

Independently of the mode you play in, there’s still huge replayability as the evolution of the enemy is dictated by the way you play. You can essentially explore different strategies, and in fact in the first half-dozen of stages you can determine the evolution pattern of the top and bottom half of the enemy independently, each of them taking one of 3 “attributes” (Attack, Wide, or Armor), up to 9 globally different evolutions and behavior of the enemy.

You can explore that on your own, read more about it in the wikipedia entry, or perhaps venture into the forums here to discuss it – it’s intuitive how you trigger Attack and Wide, but the Armor attribute is a bit dodgy (so I guess it could have been better implemented) and it took me ages and some internet help to figure it out (strangely, I couldn’t find the explicit explanation of how to do it anywhere, but pieced it together from the tidbits I could find).

Oh, and the game has a replay feature that you can have record the different evolutions of bosses you fight and/or a stage by stage replay (and the files of this are very small as well).
You can check out a video of the action in youtube.

Controls: 8 (if you have a gamepad) 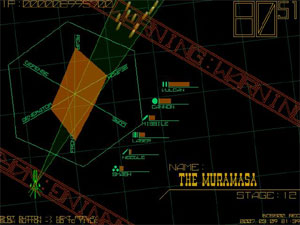 The game allows you to use a gamepad, which I recommend. If you don’t have a gamepad, you’re stuck using the keys – the default setting is good and you can map them any way you want to your keys, but it remains worse than using a gamepad (at least for me).

You can move in 4 directions, and there are 3 actions and the pause game function. By keeping the “slow” depressed you move slower, so you can dodge bullets with precision or keep the fire on a specific section of the enemy ship while it moves. There is a toggle between firing modes, from the straight vertical spread into the adjustable direction mode you will find yourself playing in the majority of the time. And of course there is the fire button/key.

You will never get as much out of the game if you don’t use the alternate the firing mode – and it does take some getting used to it. In this mode, if you aren’t firing and move, the direction and spread of the fire changes (if you move to the left the fire will point to the right; if you move into the direction of the fire, the spread increases, and if you move away from the direction of the fire it gets focused). There is no way to adjust the direction and spread without moving your ship, although you lock in that direction and spread after setting it simply by keeping the fire button pressed. You will get used to it after a while, and it’s actually a clever way of doing things while keeping the controls simple, but it has limitations (you need to stop firing to readjust it, you can’t re-adjust it without moving, and you can’t lock it in a direction without constantly firing – all things you might want to do at certain times).

Affordability: 10 (because I can’t give it more!)
It’s free. A great freeware game. And it’s tiny (under 1 MB to download, under 1MB after installation), and individual game sessions won’t take long either, so it’s “affordable” any way you look at it.

Overall: 9
It’s free, simple to install and in principle no trouble getting it to run (it runs on my 4 year old laptop). No reason not to try it.

If you like shoot ’em ups you simply have to try this- I can’t stress this enough, give it a go.