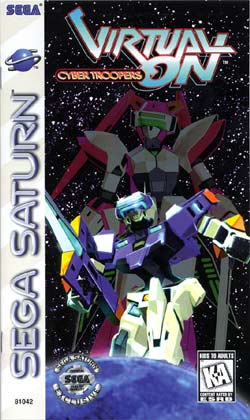 Virtual On: Cyber Troopers is a 3D Mech combat game from Hitmaker and Sega. The game pits two gigantic robots against each other armed with lasers, missiles, swords and various other weapons. These mechs can run, walk, jump and even climb on various buildings to get a better shot at the opponent. Much like tank games, you can look one direction and move another. Set in a three dimensional arena, you can hide behind obstacles and then surprise your enemy by leaping into the air. It also takes cues from the fighting genre as you have up to three rounds of one-on-one battles to determine a winner.

Graphics/Presentation: 7
If you have played the original arcade Virtual On, it is obvious that it was a graphically ambitious game, blowing away arcade Virtua Fighter 2 and Fighting Vipers with a spectacular high-tech mayhem full with huge laser beams, bullets, rockets complimented with impressive 3-D explosions. So, the Saturn version does have a lot to live up to.

The Saturn port of Virtual On is faithful to the arcade game in terms of gameplay and control, but the graphics aren’t as good as they could be. With powerful arcade games, graphical compromises are always expected with home ports. However, Saturn Virtual On is not as good as Sega’s other arcade conversions like the smooth Sega Rally and the legendary Virtua Fighter 2. This does not mean the Virtual On is a bad port. At a glance, you will not notice much difference, other than some of the arcade’s shadowing techniques missing from the Saturn version.

The primary graphical differences from the arcade version are more subtle and technical. Virtual On does not run at 60 frames per second like Fighting Vipers and Virtua Fighter 2, nor does it have a high resolution like Decathlete or Virtua Fighter Kids. Virtua On for the Saturn simply runs at 30 fps (although without any slowdown) in low-res mode. This is understandable, however, since your mechs will be moving tremendously fast, and there is a lot of firing and explosions surrounding you. To be honest, Virtual On is a lot for the Saturn to handle, especially when you consider the console’s 3D limitations.

On the bright side, the texture maps are similar in quality to Sega Rally. They are pixilated but drawn well enough to have a high-res look at common view angles and distances. The lower resolution is acceptable, but sometimes it can be difficult to read your opponents movements.

Hitmaker also excelled in their use of software translucent effects, notably in the explosions and obstacles. The polygon count in Virtual On is pretty high, resulting in some nice character models. There is very little polygon breakup in the Mechs and for the most part the battle field obstacles. However, like most 32-bit 3D games, the polygons are a bit on the jaggy side. Can’t do much about that though. 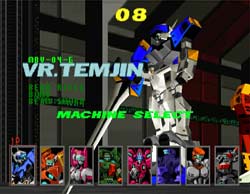 The most impressive graphical aspect is shown in the 2-player combat. This mode is extremely playable (especially the vertical split-screen) and amazingly, very few compromises were made graphic-wise. In fact, it still runs at 30 fps like the one-player mode.

The overall presentation of the Saturn port is top-notch as you would expect from a headlining Sega title. The mech theme is played up and everything is quite colorful. Even with its limitations, Virtual On is a visual treat. However, as you will soon find out, Virtual On’s true strength is in its gameplay.

Music/Sound: 6
I didn’t really enjoy the music in Virtual On, nor did it get me in the mood to engage in frantic combat. The sound effects redeemed the game’s audio score, however as they do justice to the great mech battles and add to the destructive atmosphere of the game. Fortunately, the music is played softly so the sound effects are the primary audio experience.

Gameplay: 9
This is where Virtual On redeems itself as one of the most exciting games on Sega’s 32-bit platform. While it may take a bit of time to get used to the mechanics of the game, you will soon find yourself engulfed in a fast-paced battle filled with a fury of laser and explosions.

Many people initially shoehorned Virtual On into the 3D fighter genre. While it does have elements of a traditional fighting game, I don’t think it is a fair label for the game since it not only offers a fully 3D area to move about and attack from, but it also has a much different way of maneuvering your character.

The gameplay in Virtual On has been finely-tuned in order to bring a deep battle system and furious head-to-head combat. Virtual On has well-balanced difficulty levels and features a wide variety of mechs to choose from. If you know which mech to choose in order to defeat a certain opponent, you will have great success. Each character has a unique fighting style. Some prefer the air to ground and others the opposite.

You will quickly find that the battles in Virtual On are quite intense. Your enemy will attack you from all sides, and they will not let up. If you want to win, you can not give them a chance to make their move on you. If you relent on your attack, you will expose yourself to all kinds of enemy assault. Be sure to keep your eyes and ears peeled to clues about your enemy’s assault. If you don’t make use of everything you have available, you will find yourself as a exploding pile of scrap metal. 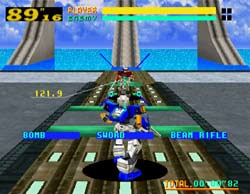 There are a number of approaches you can take to bringing your opponent down. You can choose to go all out and use high-risk kamikaze technique or you can slow things down and whittle your opponent’s life bar down bit by bit. You can also go defensive, hiding behind objects and just nail your opponent when the opportunity springs up. There is really no limit to what you can do in the game. Of course, you can also mix and match each one to incorporate different aspects of each style into a particular fight. The depth of playability in Virtual On ensures that you can play for quite a while and still have motivation to continue. There are always new techniques to try and learn in order to excel in the game.

Control: 7
I think the thing that bothers me most about Virtual On is the control scheme. The game is definitely not one where somebody can just sit down at the game the first time and start out doing well. It really takes some time and concentration in order to master the controls and succeed in the game.

Virtual On was designed to be played with a dual-joystick setup. The “Twin Stick” controller for the Saturn is available in order to replicate the configuration of the arcade game. For those who can’t afford to pay for the Twin Sticks, you have to make do with the normal controller.

Most people will find that the control scheme is unintuitive when using the standard controller. There are a lot of buttons to press, as the programmers have had to replicate the controls of the twin stick thing with the Saturn’s pad. After you get used to it, the controls work really well.

I must also mention that Virtual On is not a button mashing game. You have to learn which weapons to use and when, when to hide behind obstacles, when to go up close, when to attack from the air, and so on. If you just run around and shoot frantically, you will lose.

Overall: 8
While it is not the best Saturn game, Virtual On is a solid title and deserves a place in almost every Sega Saturn collection. The addictive gameplay will keep you glued to the screen for years to come. It is quite a sight to behold, the graphics are amazing, the sound fits the game perfectly, the gameplay is addictive, and the control is very tight once you get used to them.

A sequel was produced on both the Dreamcast (Virtual On Oratorio Tangram) and the PS2 (Virtual On Marz) in addition to a Japanese-only arcade sequel, Virtual On Force.

I have this on both my Saturn and Dreamcast and absolutely love it. I first discovered it years ago in my college arcade, and soon after bought it and a Saturn.

I wish they would put out an updated version that would take advantage of the dual analog sticks on most of the modern consoles.

I had this for the Saturn aswell and it was one of my fave games. None of my friends had a Saturn and they used to love playing this when they came to my house (Our fave game was Athlete Kings though – strange I know but that game was so addictive). I never got to play Virtual On on the arcade though. Did you??
Were the sequels any good because I have not played those either.