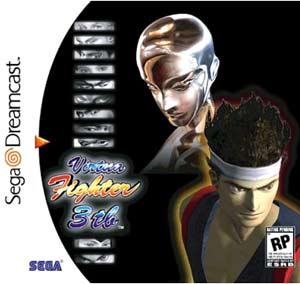 The third installment of Sega’s premiere 3D fighting series seems to suffer from a was could be labeled as middle-child syndrome. While it is a decent game, it had a number of circumstances going against it.

The first Virtua Fighter was, of course, a ground-breaking game as Sega brought in its cutting-edge 3D modeling and animation to revolutionize the fighting genre. Virtua Fighter 2 improved the formula in virtually every way, so it was warmly embraced at its arrival. Both of the first two installments were fresh and enjoyed great commercial success in both the arcades and the Sega Saturn console.

However once Virtua Fighter 3 came on the scene, not only was there many other 3D fighting franchises on the market such as Tekken and Dead or Alive, but Sega was also quickly doing away with the Saturn and moving on to the Dreamcast. Because of these two factors, Virtua Fighter 3 did not become as significant as its siblings.

Graphics/Presentation: 6
Virtua Fighter was developed during the time of the Saturn and it shows, for the most part. Sega originally planned for a port of Virtua Fighter 3 to show up at the end of the Saturn’s lifespan and it would have been one of the best Saturn games in terms of graphics, but it just didn’t happen. 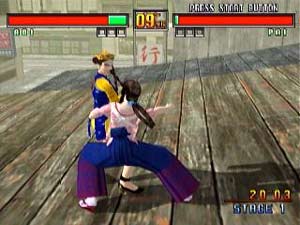 This is not to say that Sega did a bad job with the graphics. As Wikipedia states, the game “was a revolutionary game from a technical standpoint, with its detailed graphics earning widespread praise from critics and gamers alike. Characters’ eyes now appeared to track the opponent’s position, their muscles could flex and relax, the fighting arenas featured stairs and slopes, and Dural, the female robotic final boss, was made of a metallic surface that reflected the environment around it.”

I have not played much of the original arcade version, but many experts claim that the Dreamcast version is inferior to the 1996 arcade version because of a rushed port job.

While Virtua Fighter 3tb continued the tradition of silky smooth character animations, it had some very choppy reactions when a character is attacked in the middle of an animation. The background are beautiful for the most part, but the colors in the game as a whole seem rather bland. Again, it would have made for an excellent Saturn game, but it just doesn’t live up to the standards of a Sega-developed Dreamcast game.

Sound/Music: 4
The audio qualities have never been the strong point of the Virtua Fighter series. I found the background music to be very boring and forgettable. You might as well not have music at all. Also, the voice-overs of the English-speaking characters are incredibly cheesy.

Gameplay: 9
Up to this point, you may be wondering if you should even give Virtua Fighter 3tb a chance. Fortunately, the game is redeemed by the solid gameplay that has made the Virtua Fighter series a strong franchise.

This fighting game is not good for casual players. I’ll get that statement out of the way right now. If you don’t feel like devoting some time to learning the game well, I recommend tracking down Soul Calibur or Dead or Alive 2 right now. 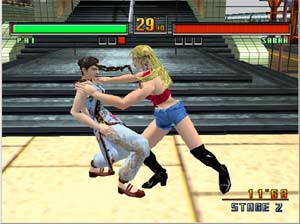 There is no instant gratification of mastering Virtua Fighter 3tb. If you want to get good, youÂre going to have to log in the hours to get good. Button mashing will never take you all the way in a good fighting game, but in VF3tb it will take you almost nowhere. Time and patience are required to get the most out of the game. But keep in mind that once you do learn the game well, you will find yourself “in the zone” and will have a killer time.

The Dreamcast port of Virtua Fighter is based on an update to the original arcade version known as Team Battle. It featured battles between teams of various fighters, similar to the early King of Fighters series. I don’t end up using the feature much since I like to stick with one character at a time, but you may find the mode helpful when experimenting with the various characters and discovering which one fits your style best.

Control: 10
The control in VF3tb takes awhile to get used to unless you are familiar with the previous Virtua Fighter games. Instead of the total 3D movement of Soul Calibur, Virtua Fighter is on a 2D axis, but includes a sidestep button to give 3D movement. This system works fairly well once you get used to it, but it is more restrictive than true 3D joystick movement.

I have to admit that the sidestep technique really does add a nice strategical element over the previous Virtua Fighter games. It also has a much quicker response time that Soul Calibur’s full 3D movement. If you have quick timing, you can get quite a thrill from skillfully dodging the attacks of your opponent.

Affordabilty: 9
Launch titles are, in most cases, quite affordable in the aftermarket. Virtua Fighter 3tb is no different as you can easily find it on eBay for just $2 or $3. Basically, unless you don’t like fighting games, you can’t afford not to pick this one up.

Overall: 8
While it isn’t the best 3D fighter on the Dreamcast, it is still one of the system’s defining games. The aesthetic qualities of the game are below-average for the Dreamcast, but the strong gameplay and tight controls more than make up for these issues. If you are looking to build up a well-rounded Dreamcast collection or enjoy a variety of 3D fighters, you should seriously consider picking up Virtua Fighter 3tb.

I have 3tb, but never quite got into it… Even though I’m a big Sega fan I was always more keen on Tekken… Perhaps it’s the instant gratification problem you mentioned…

I’ll dig it out again sooner or later and really try to practice, and maybe one day I’ll appreciate the game fully…

(jonic, you are always in seedy places…)