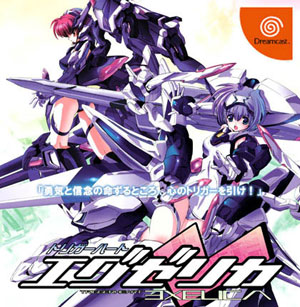 One of the most interesting things about the Sega Dreamcast is that commercial games are still slowly being released in Japan more than 5 years after it was taken off the retail scene in the US. As one of the three (so far) 2D shooters to be released in 2007, Trigger Heart Exelica is gathering a good deal of attention from diehard Dreamcast fans and shmup addicts.

Whenever I review a shooter, I have to admit that I am not a shooter expert. I like to play them on occasion, but I am not fluent in all the hardcore terminology an such. So if you are looking for a detailed gameplay review from the perspective of a shmup master, you should look elsewhere. Instead, I will take a look at Trigger Heart Exelica from the perspective of your average old-school gamer.

Graphics/Presentation: 8
There is not much to complain about in terms of graphics at all. Everything is well-executed, colorful, and well animated. It does not quite have the polish and character of an Ikaruga, but it is quite respectable.

There did seem to be a bit of a slowdown when explosions filled the screen after defeating the bosses, but it is nothing that took away from the game. If I remember correctly, I have noticed this on some other Dreamcast shmups as well. 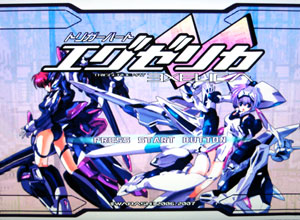 Trigger Heart Exelica does support VGA mode and looks absolutely beautiful, as expected. The game also supports vertical mode for those of you with widescreen displays that you have the ability to rotate. This would have worked perfect for me on my widescreen LCD, except that my monitor only rotates clockwise and Trigger Heart Exelica only let me rotate the game the opposite direction.

The intros and menus were very well-designed and I loved the overall style of the presentation. Most of the text and speech in the menus and options were in English, so it is very import friendly. However, the tutorial at the beginning of the the game is all in Japanese, so you may need to look online to figure out some of the gameplay mechanics like grabbing and tossing enemies unless you experiment a lot.

Overall, I would put Trigger Heart Exelica in the top 5 list of most professional and beautiful Dreamcast shmups. (just don’t ask me to rank them right now).

Sound/Music: 7
It takes a lot to impress me in terms of video game music, but Trigger Heart Exelica does an adequate job. The music was pretty typical for a shooter, if not bordering generic. It wasn’t especially dramatic or anything, but had a rather old-school arcade feel to it.

The sound quality overall was respectable on my speakers and I enjoyed the sound effects and the English voices were greatly appreciated. 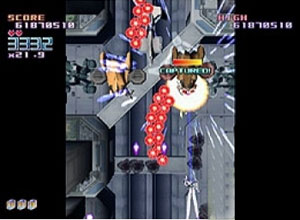 As I stated in the introduction, I don’t claim to be a shmup expert and I won’t pretend to be. I can’t give you a detailed breakdown of Trigger Heart Exelica’s gameplay elements, but I can definitely give you my impressions as a casual shooter fan.

One of the biggest obstacles with shooters for me is the difficulty level. Some of the modern shooters focus on being as challenging as possible for the hardcore shooting fans. Trigger Heart Exelica isn’t one of these. While it is not quite as easy as a game like Zero Gunner 2, I felt that Trigger Heart Exelica is right at that sweet spot of being easy enough for casual fans like myself while still having enough bullets filling the sky to make things interesting. Keep in mind that I was playing in “Normal” mode, so you can adjust the difficulty level accordingly for your skill level.

I think the most appealing thing about Trigger Heart Exelica was the lock-on and fling technique. Your character has the ability to lock on and capture the smaller enemies and bring them up to yourself. You can then use them as a shield or fling them at other opponents for extra damage and points. I have to admit this gimmick took some getting used to, but I effectively added an interesting dimension into the gameplay.

One other little tidbit caught my attention. As with many shooters, throughout the game you collect little yellow items for points. However, the items are actually drawn into your character when you aren’t shooting. It is a little incentive to only shoot when it most appropriate instead of just holding down the fire button. 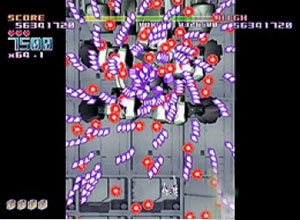 I felt that Trigger Heart Exelica has enough little gimmicks to keep the shooter unique and interesting. While it wasn’t as deep as Ikaruga, I felt that is represented a game that should not be overlooked by those remotely interested in shmups.

Affordability: 6
As with most new Dreamcast imports, Trigger Heart Exelica won’t come cheap. You can still pick it up at importers like PlayAsia for $60. Is it worth that much just for the gameplay? Not really unless you are a diehard shooter fan. At that price, you are primarily paying for the collectability of the late Dreamcast releases.

Overall: 8
I was pleasantly surprised with Trigger Heart Exelica. It won’t blow you away or anything, but it is good for an afternoon of shooting goodness.

What? 9 for graphics? Are you high on something? Not even Ikaruga is worth 9 let alone this (yes I’ve already played and finished this game).
This game graphics are worth say… 5, 6 point at max. Stuff like Ikaruga is worth 7 or 8 at max, now Under Defeat that is already worth 9 points, and only stuff like Soul Calibur, RE: CV or Shenmue are worth 10 points in graphics (Shenmue might be worth 11 but that’s another discussion).

I agree more or less with the rest of the review otherwise thou I’d lower 2 points to gameplay and 1 to music since you can get through most (all?) the game with using that gimmy kick anchor feature and the only really catchy tune on the game is the bosses theme.

Now what I’m really looking forward is Karous, let’s see if it lives up to the expectation (thou I’m a bit sceptical).

When I rate graphics, I compare it to the same genre on the same system. Ikaruga would be a 10 for me in that comparison.

Presenation and display options are also weighted heavily. Both of which are very nice on here.

Ah, ok then but still no.
Under Defeat would get 10, Ikaruga would get 8 to 9 and TGE would get 7. Have you noticed how lame the explosions marks look on TGE? They look more like coffee marks rather than blasted soil/metal 😀

I dunno why people hype Ikaruga that much, the graphics are good but not that awsome, it looks like Treasure PCs were broken and they only had different tones of brown to draw the textures X-D
The music is a tad overdramatic too, if the game was more colorfull and easy going (in the sense of not so hollywood like drama) then it would’ve been way better.

Eeh you talked me down to an 8.
And it is possible to have more than one game have a 10.

And yes it’s possible to more than 1 game to have 10 but you have to notice that Under Defeat graphics are better than Ikaruga’s. Just notice the particle flying out and the smoke when you blast something, the treets shaking when you go on top of them, the reflexion of your helicopter on water ponds or the way the bosses crap out when you beat them. The third boss for example shows this very well, he craps out and the wings fall apart plus the body of the plain rolls in the air ’till it hits the soil (serves him right X-D), the forth boss even has the huge light that blinds you when fighting it, quite neat.

Under Defeat has a lot of details that Ikaruga doesn’t and that make it graphically superior to Ikaruga.
And that reminds me, it was G.Rev who made Ikaruga background graphics not Treasure… I wonder if they were saving the color palette when creating Ikaruga, they were like: “Let’s just use brown and keep the rest of the colors for our own games” X-D 😛

I guess, I’ll have to give Under Defeat another spin — I didn’t quite give it enough time, I guess.

BTW, you have some pretty good info 🙂 You should do some writing yourself — if you want to help out around here, just let me know

You should, it’s a nice game plus the second round (2-x) of the game has some pretty … naughty images of the female pilots. They are naked and only covered with a bed sheet at the end of last level 😛

And I have some good info? Why? Where? Because I said G.Rev did the Ikaruga background graphics? It’s in the credits, just watch and read the credits at the end of Ikaruga (don’t let the birds distract you :-P), at a certain point you’ll notice that G.rev is mentioned.

Well, I wasn’t just referring to this set of comments, but yours in the past as well.

I don’t know, you just seem to retain facts well. Just take it as a complement. 🙂

Ok then, thanks for the compliment. If I ever remember anything smart related to retro gaming I’ll let you know.

I agree. Under Defeat looks quite a bit better than Ikaruga.

Definately not $60 anymore. I just bought a copy for myself at $112, and it’s usually going for a lot more than that.