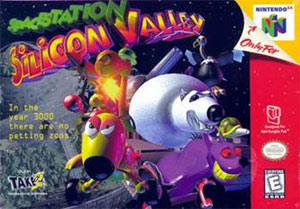 With so many unique and interesting games from the past out there, I obviously don’t have time to review them all myself. This time around we have racketboy.com contributer, SegaVega reviewing one of his favorite under-appreciated gems, Space Station Silicon Valley for the Nintendo 64.

Introduction
“There are assuredly a thousand titles of fair quality and general obscurity, but moving up the list of the most criminally overlooked games ever, one absolutely flooring title has been disregarded to an unequivocal extent… I’m referring to the phenomenal title Space Station Silicon Valley whose excellence is simply unreal.

To elaborate on it’s origins, this game was a laborious effort developed in Scotland by DMA Design, and released for the Nintendo 64 in 1998. Yes, DMA, the house that Grand Theft Auto built. Space Station Silicon Valley was the product of countless great ideas, all respectably executed and rarely seen since. The acclaim from those who experienced it was undeniable, equally undeniable would be the shameful media neglect it received. To say that it rounded out the originality factor on the N64 would be doing it a tremendous disservice; this title filled the void completely.

Story:
Space Station Silicon Valley followed a Pikmin-esque anti-hero named Dangerous Dan and his rickety robot Evo as they searched for a missing space station and it’s crew members. With each ongoing minute, the game serves to impress the player with it’s unending array of uniqueness. It begins with the bumbling duo arguing their way into a rough landing on a strange planet. They manage through this, to kill an android dog in love with an android sheep (yes). Evo the robot is destroyed, his parts quite separated, and in order to survive, his microchip inhabits and reanimates the mutilated pooch. They then set off to restore Evo and solve the numerous other mysteries at hand. Thus begins one of the most amazing and mistreated games of any generation. 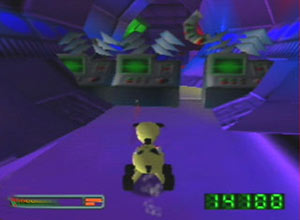 The gameplay focuses initially in controlling Evo through this dog, whom has a number of abilities (rocket power), and soon after you take control of the aforementioned sheep. The game however, later moves on to a much wider selection of animals. Over 40. Each of these hosts have their own unique strengths and weaknesses, and are not the simple model swapping that alternate characters in many games exhibit. From snow throwing penguins, to juggling grizzly bears, to crapping rats, the game is packed with possibilities. To top it off, each NPC animal responds differently to the animal you are controlling, as well as to the abilities you may use to attack it.

The game ultimately spans over 35 levels, each with numerous quests and brilliant design which uses the multi-character game system to it’s full potential. It should also be noted that the animals are each very unique and well contained, so as not to confuse or mix up their abilities. This is no small feat for a game with so much content. Few titles before or since have ever contained as much playability, with even upcoming games like Viva Pinata holding only a piece of Silicon’s whole. Ultimately, I would go so far as to claim the gameplay in this title to be some of the best of it’s generation.

Audio and Video:
The graphics and sound in Space Station are equally as original as it’s gameplay, and executed with the same level of fervor. The game’s look is decidedly humorous, one might even say light-hearted. This creates a genius contrast to the often twisted events that unfold, almost comparable to the look/direction of The Mark of Kri. The animation is also quite exaggerated, and brings the originality of the characters and game world to a higher level than most developers could ever hope to achieve. The sound is very fitting as well, with Starfox-style voice overs that push the feel of the game farther, “elevator” type music to stress the controlled environment (it really works!), and a brilliant “speaker phone” system that plays the actual BGM in the game world itself. The closer you get to these spekers, the louder the music becomes, with the ability to destroy them entirely. The sound effects themselves are also quite priceless. 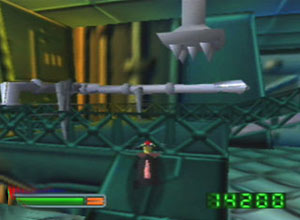 Space Station’s pacing and sense of progression is absolutely brilliant. By the game’s epic conclusion, you’ll certainly feel the experience as complete, and the triumph of the developers will become very apparent. This is all I will say so as not to spoil the finale for those who have yet to play this title.

It can also be said that Space Station is one of the most flawless games of it’s time. The title’s only “downfall” would seemingly be the lack of co-op play, though I would argue that the game would lose some of it’s ability to draw you in through that addition. It may have made for a good feature in a sequel, but unfortunately, we know what happened on that front. One could also argue that the graphics may not hold up as well today, but they remain some of the best and most inspired on the N64 and are far from damaging to the enjoyment of the title.

Summary:
I know of no more worthy a game for this subject than Space Station Silicon Valley. This is a game that did not give it’s creators the stature they deserved, a game that did not sell as it should have, and a game that simply is not remembered or respected nearly as much as it should be. To those who’ve not played Space Station Silicon Valley, I implore that you do so. You won’t be able to make up for it’s poor sales, but it’ll appreciate the purchase nonetheless, rewarding you with one of the finest gaming experiences the world has never experienced.”

An excellent review Racketboy… Guess I’ll just have to (also) get me a N64 and SSSV cartridge… Sounds extremely promising, really.

I will definitely try to check it out.

The review is a little bit too enthusiastic, though. I’m just sayin’.

Isn’t this the game with a bug in the last level that prevents the game from being completed? Something about a trophy that appears but cannot be picked up?

gnome, SegaVega wrote the review, not me 🙂

This is the most wonderful game I have ever played! I used to play when I was younger, but I never personally owned the game. I must say that his review is awesome on the game and that no one should say anything different. Call me a “geek” if you will, but I think that his description of the characters was quite fitting! Way to go!

This is another reason I wish my N64 still worked. I loved this game, though I was stuck on the second part of the jungle level, you know, the one where you kill a hippo by laughing at it with a Hyena. I could never get over that damn lava pit. The gap was big and there was little room to move around. Otherwise, this game ruled.

SSSV is an amazing game. EVERYONE BUY IT!!!

Neil i have to agree with you that part always annoyed me and i dont think i ever got over that one i am still stick there… HA HA!!!!

The level design was a bit underwhelming at times but I loved this game and still do! I liked being the kangaroo.