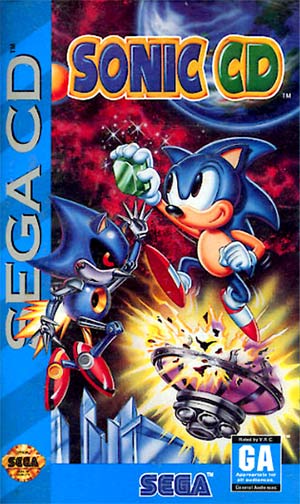 Although it may not mean a whole lot, Sonic CD is definitely one of the top 5 games on the Sega CD. If you owned a Sega CD, you probably bought Sonic CD. It is a traditional Sonic game featuring colorful graphics, a quality soundtrack, smooth control, a vicious sense of speed, and wicked-cool level design (or crack-headed, depending on who you ask). Sonic CD still holds its own against modern platformers — It took everything that made the original Sonic great and turned it up a notch.

The game does have a few quirks about it as it does not seem to be developed completely by Sonic Team. Some of the character animations are different from the normal Genesis/Megadrive counterparts. You will also find that instead of the spin-dash, you have a running-start move. In many ways, Sonic CD feels like a twist of the original Sonic game and Sonic 2. However, Sonic veterans may find this change refreshing and is mixes things up a little.

Graphics/Presentation: 9
The graphics fit the Sonic standard, but not completely. Although Sonic CDâ€™s colors are more vivid, the game’s animation and handling seems less polished than Sonic 2 and 3. On the other hand, Sonic CD is still far from being a bad-looking game; it just lacks a crucial something when compared to its 16-bit brethren.

The menus and overall presentation of the game is as good as it gets — the intro was incredibly impressive in its day and still looks sharp. The FMV intro cutscene is a little grainy and is not full-screen, but in comparison to other Sega CD games, its one of the best. Sonic CD allows you to save the game, either to the Sega CD’s internal RAM or to the RAM backup cart. No more having to restart every so often! The game also features a time attack mode, but no versus mode.

Sound/Music: 9
The sound effects and most of the music on Sonic CD is brilliant — in fact, I believe it made bigger impression on me than any other feature. Hearing the Dr. Robotnik’s theme and evil laugh on a quality stereo system during the 16-bit days was jaw-dropping. It still gives me a bit of a chill to this day. The audio in each act of every level (past, present and future) is also different, resulting in a great variety of audio experiences. The only thing that keeps the audio score from being a 10 is some of the music a bit on the tacky side.

Story: 6
As with all of the 16-bit Sonic games, there isn’t much of a story (not that you need one) — just give us speed. The main addition to the story involves Dr Robotnik using Metal Sonic to kidnap Sonic’s female admirer, Amy.

Gameplay: 9
This Sonic iteration gives us blinding speed and creative levels just as well as any other. However, Sonic CD added a new dimension to the Sonic Formula: exploration. By incorporating a new time-travel dynamic, Sonic could jet to past and future versions of whatever level he was on. This opened a number of opportunities and really gave the game a whole new layer of depth and replay value. Instead of simply finding the quickest route through a level, which is what most players did in a Sonic game, they spent time learning the ins-and-outs of every stage in a totally different way. To see the game’s true ending, you must travel into the past and destroy a machine placed there by Dr. Robotnik. This causes the normally Blade Runner-esque future to become a “good future.” The hunt for the machines adds an element of exploration that hadn’t really been exploited in a Sonic game at that point.

If you are up for all the time-traveling, you can have up to around 50 levels plus bonus rounds at your disposal. However, if you just race through the game, there are only about 15 or so. No matter how you look at it, Sonic CD has enough to keep you busy.

The main downfall is that most of the Robotnik bosses are fairly easy for Sonic veterans. Most of the bosses only take about 3 solid hits. The only boss that is a problem is the Metal Sonic race near the end. The Robotnik bosses look impressive, but they are all a bit of a breeze if you know what you’re doing. 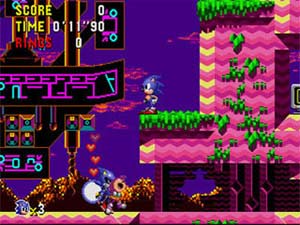 The bonus stages are interesting â€“ and can be either enjoyed or despised, depending on your outlook. They were designed to take advantage of the Sega CD’s Mode 7 scaling and rotating capabilities. Unfortunately, Sega’s version of Mode 7 wasn’t as good as good as the SNES. The graphics are in a 3D environment, but are not very attractive by today’s standards. These bonus rounds are very difficult to complete since it is challenging to judge your relation to the UFOs you have to jump at — which is necessary to earn Chaos Emeralds. Just like any other Sonic game, if you get all the Emeralds, you get to see the “best” ending. But the bonus levels are a good change of pace from the bonus levels from other Sonic games and will give you quite a challenge. Also, I personally enjoy seeing games that take advantage of a system’s power â€“ even if the results aren’t perfection.

Affordability: 10
Sonic CD can easily be picked up for a couple dollars for the disc and $6 for a complete version. Not quite as common as Sewer Shark, but as pretty close.

Overall Score: 9
Sonic CD improved on the formula of the original Genesis/Megadrive Sonic games by adding an amazing collection of soundtracks and sound effects in addition to some extra eye candy. It truly made use of the Sega CD’s extra power without making unnecessary additions. As I mentioned in my post, “Sega, I Dare You“ť, Sega should take many of these concepts and bring them to the current-generation’s 2D graphical standards and make the real Sonic game we have all been waiting for.

In comparison of quality between the other 2D Sonic games, Sonic CD is a strong contender. Sonic CD may not have the polished animation of Sonic 2 and 3, nor the extra shield/moves than Sonic 3 offers, but the added depth of the time-travel feature and the incredible sound gives Sonic CD a real boost.

I tried this much later using an emulator. I just couldn’t seem to enjoy it. The gameplay was much less refined then even Sonic 2, so it was hard to adjust to that. And I am definitely not a fan of the music. I know that Japan got a totally different ost, but they really sound like the same type of music in the end. Not very memorable. At least not when compared to the genesis entries.

I think the music is great.And the article has some glaring
errors:
1.In Sonic CD,you collect TIME STONES!Not Chaos Emeralds,but Time Stones.
2.You CAN spin dash.
The gameplay is quite sophisticated,and features rolling sprite views not seen in other games.The opening and ending
clips,especially at full length,are two of the most kickass
cutscenes in Sonic History.This & S3&K are Sonic’s 2d best.

dude someone said you can play it on emu. where can i download this game? btw i already have the cd, but it no work

where can I get the rom?

I have been trying it out and although I grew up with Sonic and Sonic 2… this game looks worse than Sonic 2 and doesn’t have the same sleek feel. The first few stages were incredibly easy and short (and I still haven’t figured out what the point is to the Future/Past signs) and the music’s voices creeped me out. It seems that a lot of Sega CD games just add voices but don’t improve on graphics, except for Snacher, which is a game I actually enjoy, that is, when I know what to do next. The gameplay isn’t horrible but I really hoped to see an upgrade in graphics (like the x23). I actually liked the old Genesis music a lot better and am not to pleased on how the super dash attack doesn’t work half the time (and there is no dash animation). In the end, Sonic 2 will always be the best Sonic game followed by the first one. I honestly care about cut scenes. That isn’t what Sonic is about — it just seems to have gone backwards with just about every aspect of the game. It honestly looks like Sonic Crackers, and that isn’t a good thing. But, eh, it’s playable.