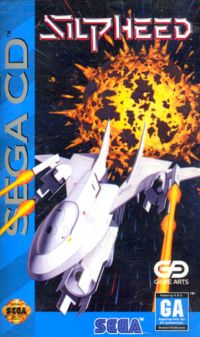 The Sega CD is one of those consoles (even though it was just an add-on) that took a lot of beating over the year for not fulfilling its potential. However, there are a few great Sega CD games (many of which were Sega CD exclusives in the US for some time) that made a Sega CD worth owning. Silpheed is one of those great titles because of its solid gameplay and presentation that still is entertaining to this day.

This Sega CD version is actually a remake of an obscure PC game. This shooter combines gameplay reminiscent of Galaga, pleasing polygon graphics, and excellent interstellar backdrops resulting in an classic that was simply ahead of its time.

Graphics/Presentation: 8
Silpheed has a very nice blend of sprites and polygons to create a gameplay environment that has an old-school charm with enough of a modern experience to keep newer gamers interested.

The polygons allowed Silpheed to have some impressive visuals (by 1993 standards) such as pre-rendered, scrolling backgrounds, massive asteroids and impressive explosions of gigantic fleets with debris flying in all directions. This eye candy is surprisingly effective in getting me pumped for good space shooter action. There weren’t many shooters that gave me this feeling until the late 32-bit era (Radiant Silvergun, etc).

The one graphical complaint is that your ship is fairly small in all this polygon action and the backgrounds can be so busy to the point that they distract you and cause you to lose a precious ship. However, this is fairly common with shmups and should be considered as part of the challenge. 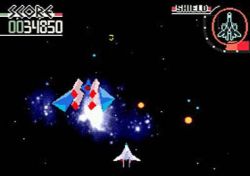 Silpheed also features a number of polygon-rendered cut-scenes between stages. Back when I first got my Sega CD in the mid 90’s I thought these were very cool. Today, they still have a nostalgic feel and is a feature that probably wouldn’t be possible on a stock Genesis. They also add to the space war atmosphere, but if you’re looking for realistic cinematics, you should be playing on an XBox, not the Sega CD.

Sound/Music: 7
The soundtrack of Silpheed is very dramatic and sets the tone for an intense space battle. I could still recall the music from the first and second levels that is timed perfectly for dramatic meteor dodging and boss fights. While Silpheed’s music isn’t quite as good as modern marvels like Ikargua, it still gets your blood pumping.

The actual sound quality, however, isn’t quite as good as it could have been. The Sega CD offers a lot of potential, but Silpheed doesn’t seem to exploit that power to its fullest. However, I will give it some credit for maintaining a nostalgic shooter feel to it.

The sound effects such as explosions, lasers, and alarms are done well and fit Silpheed’s them quite well. The narrated intermissions are above average and have a great sci-fi feel to them. The in-game voice-overs are also effective, but some may complain about their quality. Personally, I think the reduced quality of the voices add to the chaotic atmosphere a bit, but I admit they can be difficult to understand at times. 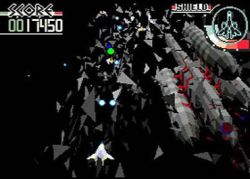 Gameplay/Control: 8
Silpheed is, at its core, a 2D overhead shooter on rails, but as I mentioned before, Silpheed’s shooting style is an evolved version of Galaga. And just like its arcade roots, Silpheed has very basic, yet solid controls. To avoid enemy ships, asteroids, lasers, and battle cruisers, you can move left, right, forward and back. The collision detection is also top-notch, so you will find that the game is fair (although far from easy).

Your ship is armed with standard lasers at the beginning of the game, but you can obtain additional weapon upgrades as you progress through the game. Unlike many shooters, you cannot change weapons during the gameplay. Instead, you can change weapons (both primary and secondary) between stages, but choosing an inappropriate weapon for the stage will leave you vulnerable until the next stage, so a certain level of memorization is required to know which power up works best where. In addition to weapons, other power-ups such as shield regeneration, limited invincibility, and bonus points can be gathered during a mission.

The Sega CD format also allows for one more interesting feature: helpful voice hints from your comrades. You’ll usually be warned by a companion of any impending danger. (“Turn left!”, “Watch out for the cannon!”) These fresh elements combine with the traditional ones to create a shooter that has a modern feel, but doesn’t stray very far from the standard shmup convention. 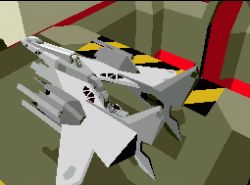 Another thing that makes this game different from other shooters is that you receive more points if the enemy is closer to you when you destroy them. This is a unique twist, but it greatly bumps up the overall challenge and makes it quite challenging to complete the game with a decent score.

What makes the game even more challenging (and somewhat discouraging for replay) is that you only have one life. You do have a health bar, but it only refills with rare power ups and only slightly between levels, making the game that much harder to get through all 12 levels. It would also be nice to be able to jump to later levels after completing them like you do in newer shmups.

Affordability: 10
Silpheed is very easy to come by and may be found for a few dollars on eBay.

Overall: 8
If you like vertical shooters, this will not disappoint. Silpheed’s shooting action is very good, and the stages offer a nice variety of challenges. If you’re weary of playing grainy FMV games on your Sega CD, this is just what the doctor ordered. And having huge asteroids and missiles whiz by in the foreground gives you a sense of speed lacking in most shooters. Although somewhat simplistic, Silpheed’s rapid-fire shooting action is fun and addictive.

Good review. This game has a 1st level soundtrack like few others. I listen to it reguarly in mp3 and its a hard one to beat, definately a classic.

The game itself is simple but very effective and one of the best for the sega cd. The comment about the voices is also true, their quality does add alot to the enjoyment of the game.

I still play this on emulator and will do for years to come. Silpheed is a minor classic!

Glad you enjoyed it as well. I need to boot this up again soon 🙂