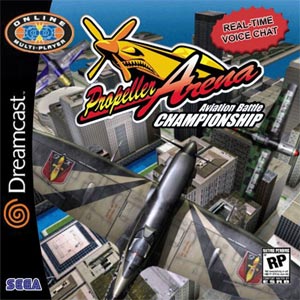 It’s a tragedy that the Sega Dreamcast was killed off so early. Not only did the console have some much potential, but Sega also had a number of games that were ready for retail, but just never got released.

Propeller Arena is one of the most famous of the unreleased Dreamcast games as it used the September 11th attacks and an excuse for its cancellation.

While some of the canceled games deserved their fate, Propeller Arena actually had a lot of promise as it was essentially a more arcade-like Crimson Skies with full online play and voice chat before their was XBox Live.

Propeller Arena’s intuitive and fun dogfighting gameplay was loads of fun — especially with a group of friends and still deserves to be remembered to this day.

Graphics/Presentation: 9
Since Propeller Arena was developed by AM2 at the very end of the console’s life, it can be expected that the game would push the Dreamcast to its limits. This was best demonstrated by the incredibly colorful and detailed environments and the number of planes in the sky all doing fiery battle at once.

Each of the game stages are very diverse and even rival the graphics in Shenmue II (which was also developed by AM2). Each also has an incredible draw distance, which allows you to try to pin down where you enemies are in the seemingly endless skies. Players can battle over busy airports, in and around an old castle, through a large city full of skyscrapers, near an active volcano, and a handful of other breathtaking scenes. Some of the arenas actually quite dynamic and interactive, which leads to a much more satisfying experience.

I just got done playing Propeller Arena with my Dreamcast VGA adapter, and not only is VGA mode supported, but it looks incredible. With the increased picture quality, you are able to sport your enemies much easier and all the beautiful landscapes look all the more stunning.

Like most Sega-produced Dreamcast titles, the presentation of the game is top-notch. One would expect that the menus and such on an unreleased game would be a bit rough, but eveything on Propeller Arena looks very polished. My only complaint about the presentation is the character designs of the pilots. I personally didn’t find them very interesting or stylish, but some players might enjoy them.

Sound/Music: 8
The music in Propeller Arena will remind most Dreamcast gamers of Crazy Taxi. While it does not feature The Offspring, the soundtrack has a similar style. As in Crazy 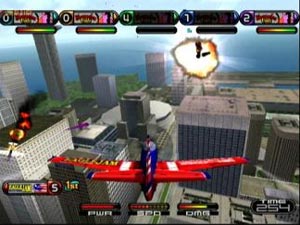 Taxi, the the music is fitting and enjoyable for a while, but does get a bit repetitive and annoying after long gaming sessions.

The sound effects aren’t anything special, but do a good job of replicating the sounds and feel of a real dogfight.

Controls: 8
The controls in Propeller Arena are a a perfect blend of simulation and arcade that creates a game that is easy to learn, but difficult to master. The planes steer flight-stick style, with an inverted-pitch scheme mapped to the Dreamcast’s analog stick. The steering can feel a bit sluggish at times, but it is actually appropriate for the vintage prop planes represented.

Specialty tricks such as loops and spins are possible with certain stick combinations. These are handy for both evading enemies and as shortcuts to getting to you desired area in the arena. There are also some flying simulation mechanics of stalling and you do have to watch your elevation because hitting the ground is a bad thing that I’ve experienced a few times in this game.

Gameplay: 9
The overall goal of Propeller Arena is fairly straightforward: shoot down as many planes as you can within the time limit. It is essentially like Unreal Tournament mixed with dog fighting. Just like any deathmatch game, if you get shot down, you will automatically be reappear in a random part of the arena to battle again. There are no real boundaries in each of the areas, but you are required to stay within the arena. If you fly out of the boundary, the computer will automatically take control of your plane and turn you around.

Players can select from eight different characters piloting five different World War II-style aircrafts, each of which has their own attributes in speed, power, and armor. Power-ups are also available throughout the game that can give your special weapons and abilities. They are similar to the power-ups you would find in a game like Mario Kart. 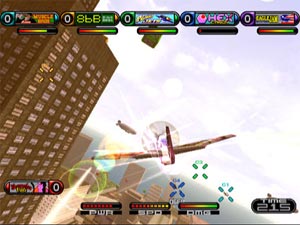 As good as Propeller Arena is to play by yourself, the game really shines when you’re hunting down your buddies. Unfortunately, since the game was never released and supported on the online servers, you are limited to 4-player split-screen action. It is still a blast to play in split-screen, but I can only imagine how sweet Propeller Arena would have been with the proposed online play and voice chat.

The easy control scheme makes Propeller Arena a great party game that is inviting to new gamers. Before you know it, you will have four people yelling at each other as they blow each their foes out of the air.

Affordability: ?
In my reviews, I usually talk about how affordable the game is, but in this case, it depends on how you look at it. If you want the actual prototype of the game (which only a small handful exist), you will most likely pay a few thousand dollars. However, one of the people that did pay up for the game, ripped it and posted it online for all to enjoy. You can still find it available for download at places like Underground Gamer.

Overall: 8
As long as you don’t mind downloading an unreleased game, there is no reason you shouldn’t give Propeller Arena a try. It is an amazing arcade-like game that is great both on your own or with a group of friends. It is also one of the best air-combat games around. It’s also an interesting piece of gaming history that is always worth another spin.

Greetings RacketBoy!
Have you got any idea where I could download Propeller Arena. All the torrents I can find are inactive. Is there a way…? Cos I *really* need to play this game.

Thanks,
From Dan aka CambridgeGuy

Have you tried Underground Gamer?:
http://www.racketboy.com/retro/2006/06/underground-gamer-retro-download.html

I have a website fully devoted to this awesome game. Take a look… it’s the #2 Google result for “Propeller Arena”, right after the Wikipedia article. 😀