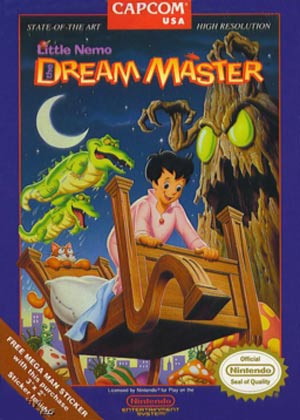 Note from racketboy: With so many unique and interesting games from the past out there, I obviously don’t have time to review them all myself. This time around we have racketboy.com contributer, SegaVega reviewing one of his favorite Nintendo classics, Little Nemo: The Dream Master for the Nintendo Entertainment System. I’ve also added a couple of statements of my own to round it out.

Introduction
The Mega Man games are the finest examples of action platforming on the NES, and are definitely some of the top titles on the system. Capcom is also well-known for a number of polished but challenging platformers based on Disney licenses such as Chip and Dale Rescue Rangers and Duck Tales.

Although Mega Man 2 and 3 are considered the height of Capcom’s action-platforming endeavor, most people are likely unaware of a third, and just as excellent game, which Capcom created during that very same period. Little Nemo: The Dream Master is one of the best games on the NES, and possibly the console’s greatest sleeper (no pun)

Story: 8
Most NES games aren’t exactly well-known for their in-depth storylines, but Little Nemo has one of the more interesting ones for a platformer. On a quiet night in England, a blimp lowers itself to the window of a boy named Nemo. Nemo is awakened and learns that the Princess of Slumberland has requested to meet him. He later learns that the King of this land has been kidnapped by the Prince of Nightmares, and it’s up to him to save said king.

The game is thought to be based on an animated film with the same name and characters (which I own but have never watched), however I’ve heard that the characters and story were created in the 30’s, in which way I’m not certain (I’d guess a comic strip). I also hear that the movie is a lot different, so the game is probably based on the original work.

Presentation: 9
Impressive, fun, charming and clever. Most admirable are the level themes, which are unafraid to try things rarely seen or seldom successful on the NES. I won’t spoil any of that. The simple cinema sequences are very softly done, and just as charming as everything else. The whole game just has a great uplifting mood to it, and really makes you feel like you’re a part of something personal.

Graphics: 9
Little Nemo oozes classic NES charm. It’s sprites all seem to be carefully crafted and everything is full of vibrant color. The characters are well designed, the often black sky is very atmospheric (it definitely drops you into its world), and the other enemies and bosses are equally as well crafted. 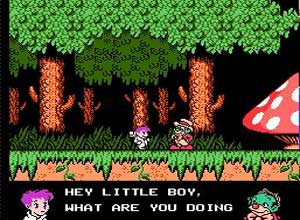 Apart from the later first-party Nintendo masterpieces like Super Mario Bros. 3 and Kirby’s Dreamland, I think that you will find Little Nemo to be one of the best-looking platformers on the NES.

Sound & Music: 8
The sound effects and music are excellent as well. You -may- not remember the tunes as you would those in Mega Man, but they are of just the right character for the game. Nothing to be disappointed with by a long shot, and it’s certainly in the upper levels of the NES’s audio history.

Gameplay: 8
It’s a Capcom game, made during the time as Mega Man 2 and 3, and presumably using the same engine (best described as “time-to-change-your-pants” awesome).

The game is an action platformer that has Nemo jumping about a number of well designed and very diverse levels. Candy is your primary weapon, as you toss it around to stun enemies, but later you’re given a wand which will destroy your foes altogether, in a more Mega Man-style fashion. The goal of each level is to scour about for the keys that open the door to the next, creating a quite adventurous dynamic as you’re able to move in either direction, and well beyond what you’ll initially see.

Best of all, is that the candy is also used to appease the more friendly animals, whom you can then use as a ride throughout the game. Each of these animals have distinct abilties like digging, climbing, super-jumping and flying, and each are used to expand the size of the levels and to acquire all of the well-placed keys. It works out much like the suits do in Super Mario Bros. 3, except a lot less linear as it’s all integral to the adventure.

Control: 9
In classic Capcom fashion, Little Nemo plays extremely well, especially considering how much diversity is at work here. Nemo moves about much like Mega Man does, and all of the animals have quite distinct controls, some remi 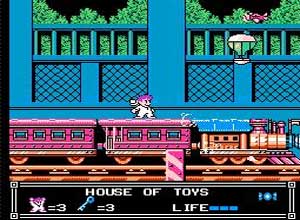 niscent of other Capcom classics. The candy is tossed at an arch, which may throw some players off initially, but it quickly becomes apparent that it’s the fighting method best suited between riding an animal and using the wand. Nothing but glory. Sweet, sweet, forgotten glory.

Affordability: 8
Like most NES cartridges, Little Nemo: The Dream Master isn’t terribly hard to find on eBay. While it isn’t the cheapest game around, you can probably find a cartridge-only copy for about $5-7

Overall: 9
Little Nemo is one of the best and most unsuspecting games on the NES. It doesn’t truly falter in any respect, and contains as much personality as you’ll ever find in any game. Nemo has all of the reasons why you would still today look for great NES games that you haven’t yet played.

Some have also said that the Genesis classic, Kid Chameleon, felt a bit like a spiritual successor to Little Nemo (even though KC wasn’t developed by Capcom). So if you enjoyed that game, take a look at little Nemo.

Pingback: PoisonMushroom.Org - Combing the Net So You Don’t Have To » Blog Archive » Points of Interest - 5/29/07

An awesome little review of a game that I had almost ever heard of!

Ever hear of Quattro Adventure? I recently got it. The Robin Hood games seems fun.

Caleb — looks interesting.
But I’m guessing it’s an unlicensed game from the look of it.
I’m wondering if there is a ROM somewhere…

This is one of my favorite games on the NES. I’m glad there are still people out there giving it some love. I find the game still difficult to this day. Thanks, Racket, now I have the song from the first stage stuck in my head!

Fans should check out the 1940’s comic strips of Little Nemo. They have a truly unique drawing style and have an incredible range of color surprisingly for an early strip. They are amazing examples of how newspaper comics can be true works of art.

@racket: Yeah, the Quattro games (Adventure and Sports, as far as i know) were released by Camerica, who never had the license for NES games. Their cartridges (the unmistakable gold and silver ones with the A-B switch on the back) thusly bypassed the lockout (10NES) function of the console.

I would assume there are ROMs out there. I looked at my collection just now, which is supposed to be complete, but i do not have the Quattro games, whereas the other Camerica games (Micro Machines, Bee 52, Mig 29, etc.) are all there. I’ll have to do some searching of my own!

Oh, and Quattro Arcade was another.
http://en.wikipedia.org/wiki/Quattro_Arcade

To justify myself, let me comment on the game reviewed. I remember renting it when i was a kid shortly after seeing the movie (which i don’t remember at all anymore). I never spent a lot of time on it, but i do recall it being sort of a cross between Mega Man’s control/gameplay style and Kirby-like graphics. On the points of the game that i remember, i must say i agree with this review completely. Reading this makes me want to try and find a copy again.

I’m glad you pictured the train level. Super difficult. Not as bad as Battletoads on hover bikes, but it definitely taxed my patience. Wonderful game.

first NES game I played and purchased back in the day :]

Wow! I played this game a million time, but i already had forgotten about it… It’s awesome to see pictures of something you hadn’t seen in years…. I really loved this game, I remember you had to give candies to animals so you could take over its bodies….

awww i loved Little Nemo as a kid and now my boyfriend is getting me the game. i ddnt even know there was one. this review has good info. thanks. im stoked!!!

I played this game a thousand time as a kid till the cartridge died…I got nearly to the end but always got killed and you had to start all over…a few years back I beat it with an emulator..thanks to save states…it was amazing 15 years later and it is still a terrific game…good games will always be good games no matter how much time passes by…I’ll probably play this game when I grow older maybe from 2050 on…

I am a personal die hard of everything nemo, I loved the game as “aside from megaman 2 and 3” of all time favorite nes game. I have just made it to the dark dream part for the first time, and I felt I should mention to everyone here. the little nemo comic strip is a piece of comic history as It was published in the early 90’s as in 1905-1914. anyways. thats what I felt I should mention. great review guy.