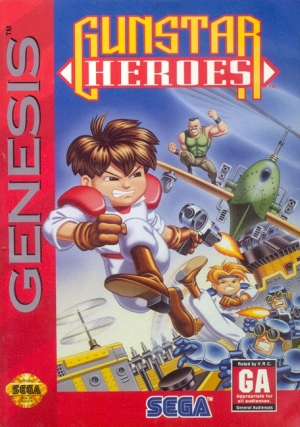 Treasure was founded When a number of developers working for Konami broke away to found their own company to pursue their own dreams of creating original games. Their first commercial project from their new development house was an original run-and-gun game named Gunstar Heroes.

It’s ironic that such a revered title could be so simple in concept yet so profound in execution. There at first seems to be nothing overly complicated about it. No combos, no secret areas, nothing to unlock. At a glance, Gunstar appears to be just another run-‘n-gun shooter, but if you take a closer look, you will see a finely-tuned engine that overflows with quality and a game play dynamic that requires quick thinking and some strategy.

Graphics/Presentation: 10
Every graphical element in Gunstar Heroes is impressive. From the rotating, pseudo-polygonal intro logo to the warping, scaling, and rotation effects throughout the actual game, you know Treasure knew what they were doing with this game.

Much like Metal Slug, the bosses in Gunstar Heroes are made up of tons of sprites that move and jiggle independently. Not only did Gunstar Heroes’ graphical effects enhance the visual appearance of the game, but it also helps increase the variety of the gameplay. No other game on the Genesis pushed the system as far as this technical marvel. In fact, nothing on the Super Nintendo scaled objects as well, or moved this fast or smoothly with the possible exception of a few Super FX chip games. (Gunstar Heroes was featured in Games That Pushed The Limits – Part 1)

All the eye candy wasn’t dedicated to special effects, however. All of the graphical details in Gunstar Heroes are excellent, with tons of parallax and a huge color palate. Everything is detailed and well animated. All the stages have something unique to them and are superbly designed. Gunstar Heroes’ character sprites seem anime-inspired, and also seem as if they were drawn with many frames of animation, as they animate very smoothly. 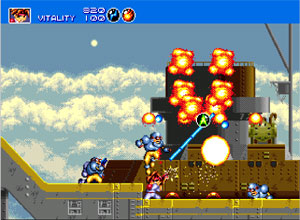 More than a dozen sprites can appear on screen at once and you won’t detect even a hint of slowdown. Some slight slowdown does appear, however, when a second player joins the action. The combination of Treasure’s fine programming skills paired with the Genesis’s good sprite capabilities makes for some hectic battles against an overwhelming number of foes coming at you from all directions. In fact, there almost isn’t a moment when you’re not being bombarded by swarms of enemies, or simply being swarmed.

Sound/Music: 9
The music in Gunstar Heroes is frenetic and does a good job of motivating you during your missions. The boss music creates a great sense of impending doom, delivering the distinct impression that something posing a real threat is approaching fast.
The sound effects are above average. While the screams of certain defeated enemies sound a bit muffled, the sounds of gunfire and thunderous explosions will be the primary audio experiences you will encounter.

Story: 7
Most run-and-gun shooters don’t have much of a storyline — usually, it seems your character just feels the need to run and gun. However, Treasure usually likes to throw at least a little story into their games — even if they are odd at times.

In Gunstar Heroes you take control of a duo of twins as they endeavor to stop an evil empire from rampaging across Gunstar-9 — a planet your family has protected for generations. The vile Colonel Red, who bears an uncanny resemblance to M. Bison (see comparison here), has kidnapped and brainwashed your brother, Green, and used him to obtain a number of gems that can destroy the world if misused. It’s up to you to save your sibling and retrieve those gems.

Gameplay: 10
Much like another popular run-and-gun shooter, Metal Slug, Gunstar heroes sends a constant flow of soldiers attacking you from every possible angle. This onslaught only pauses when you reach a boss, of which there are many. There’s more than just running and jumping, though. Your characters can also jump kick, grapple along ceilings, flip downward off of platforms, slide, super slide, and throw the majority of enemies back at their comrades.

One of the main elements that makes Gunstar Heroes stand out in its genre is its deep weapons system. It offers four basic guns: force (a pulse laser), lightening (a beam laser), chaser (a homing weapon), and fire (a flame thrower). Each of these can be used alone in a conventional fashion, but the real fun begins when you combine two weapons.

Any two individual weapons (once you’ve acquired a second weapon power-up) can be combined to either produce a more powerful version of the same weapon or one weapon that shares traits with the other (how does a pulse laser that chases your enemies across the screen sound?). There are 16 combinations altogether, and each is unique. A lot of the fun comes in finding the weapons that fit your playing style, as your choices here will greatly affect your strategies when fighting enemies and bosses. In addition to using weapons, you also have hand-to-hand combat at your disposal. You can jump kick and even throw enemies, if you get close enough. It’s really just a small addition, but little things like this add up to an incredible game. 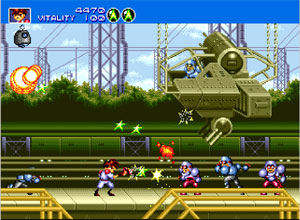 Also, at the beginning of the game you can also choose whether you want to run and shoot at the same time, or shoot while rooted to a fixed position. I find shooting from a fixed position to be much easier in the long run because it’s better to move from one safe spot to another and then fire, rather than constantly be on the move. However, you may find that remaining in one place for too long makes you an easy target. The choice is yours.

Now, once your character and weapon is taken care of, you have four stages to choose from. Similar to Mega Man, there is a unique boss guarding the end of each stage, and thus one of the four jewels. Each level also has its own little unique charm. The highlights for me are the mine shaft stage in which you can change gravity while rushing in your mine cart and the (sometimes frustrating) stage in which your fate and battles are determined by the dice of a board game. Each of these unique levels not only brings great variety to the gameplay, but also helps it show off the Genesis’s visual capabilities.

Gunstar Heroes also set new standards for bosses and some of them are still innovative by today’s standards. The most famous boss, Seven Force, is a floating green platform that actually transforms into seven unique forms, each with their own deadly attacks and patterns.

The game also offers various difficulty levels to keep you occupied. They are properly balanced so that novices should be able to trek through Easy mode, but vets will have a tough time with Hard. Two players make it all the more pleasant. Anyone new to Gunstar Heroes should have no problem getting used to the controls, since they are quite user-friendly and responsive. These tight controls are needed as you will most likely need every possible advantage to make it to the end intact.

One interesting thing about playing with a friend is that you can grab and sling him at enemies (reminds me a bit of Chip and Dale Rescue Rangers on the NES), taking out a bunch of baddies at one time. If one of you dies and continues, however, the other player loses half their health. You only get one life, which means you can’t just blast your way from stage to stage. Luckily, there are health items to be found by killing some mid-level bosses as well as by destroying boxes and barrels.

As you can now see, Gunstar Heroes is more than just a technical showcase for the Genesis, the gameplay backs up the game’s reputation as a cult classic. 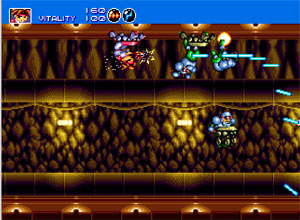 Gunstar Heroes isn’t really rare, but the combination of it being quite popular in the after-market and it not being a headlining title in the US keep it from being one of those dirt-cheap games. However, you should be able to find a complete copy on eBay for around the $20 mark and a lone cart for about $15

Overall: 10
Gunstar Heroes is a classic in every sense of the word with its strong combination of technical accomplishments and top-notch gameplay. I can confidently say that Gunstar Heroes is perhaps the best run-and-gun shooter ever to grace a 16 bit console. Fans of this game should seriously consider checking out Treasure’s Alien Soldier for more explosive action. (Both games were part of my Best Sega Genesis Games For Nintendo Revolution)

Additional Notes:
Gunstar Heroes will soon be available (along with some other great Treasure games) in the Gunstar Heroes Treasure Box for the PS2 in Japan. No US release has been officially announced yet.

Gunstar Heroes is also now available on the Nintendo Wii’s Virtual Console at a reasonable price in all regions.

There is also a rare Gunstar Heroes port to both the Sega Master System and Game Gear. I don’t know a whole lot about them. Maybe I’ll have to hunt down a ROM and try them out.

A Gunstar Heroes sequel was released in 2005 for the Gameboy Advance as Gunstar Super Heroes. I own it also and it’s very nice. I will probably be reviewing it in the near future and then have a follow-up feature comparing and contrasting these two games.

I’m pretty sure that if you have a real copy of Gunstar Heroes you’ll experience a lot of slowdown. People need to realize that most of the time they are watching or playing it on an emulator. Most Sega Genesis emulators never slowdown like the real thing does.

I got a JAP/NTSC copy of gunstar heroes the other day and i’ve only noticed maybe 2 spots in the entire game where it would slow down for like a second. it runs flawless 99.9% of the time