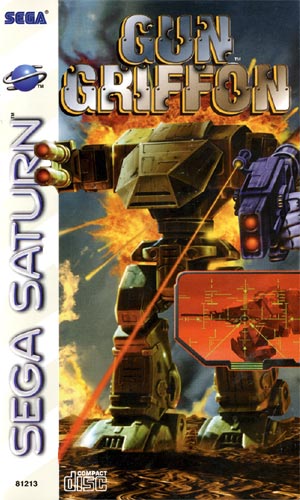 With so many unique and interesting games from the past out there, I obviously don’t have time to review them all myself. This time around we have racketboy.com contributer, Gungriffon reviewing his namesake game…

Introduction
I am a fan of everything robot-related. Whether it be a fighting, action, strategy, or RPG, if it has robots, I’m there. Gungriffon was one of my first and most beloved Saturn games.

Released by Game Arts in 1996, it was quite well received by the critics, with a good mix of fast-paced action and Mech Simulation. However, due to lack of advertising and the low popularity of the Saturn, it was overlooked by many gamers in the U.S.

It did have an excellent Japan-only sequel, a decent version for the PS2, and a total dissater that was Gungriffon for the Xbox.

Graphics & Presentation: 8
When this was first released in 1996, its graphics were top-of-the line. Mechs and vehicles are nicely detailed. The maps are large and populated with tress, windmills and other structures.

The ground and sky textures are quite nice, certainly better that the very flat look of Mechwarrior 2, released near the same time. Decent night vision, explosion, and weather effects abound with little slowdown, rounding out a great looking game.

Music & Audio: 9
Sounds effect are very well done. All weapon effects are believable, and you can feel the weight of your mech as you walk and jump around the battlefield through awesome sound effects. Allied transmissions and warning effects really put you in the cockpit, while the soundtrack is minimal, creating a tense mood. You will also be treated to one of the best opening FMV movies to this date.

Story: 7
The story is minimal though interesting. Basically, the world in the near future is running low of food and resources, and Nations have formed factions that now fight for survival. You are given a pre-mission briefing complete with tactical map that explains the situation and objectives. Again, while minimal, you always know why and what your fighting, which in an action game like this, is more than enough. 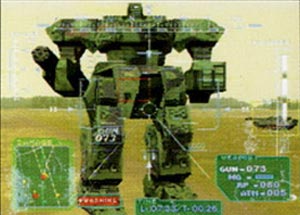 Gameplay: 9
You are the Pilot of a High-Mac, an agile and deadly Mech. The game is presented in a first-person view, with your radar, ammo, and other info present in your HUD.

Throughout the game’s 8 missions, you will be dropped into the middle of a battle field, engaging enemies and protecting allies, convoys and military installations in Day/Night scenarios and in varying weather conditions. One missions has you protecting your allies in the shadow of the Great Wall of China, and another Stalking through a fog filled forest on your way to destroy an enemy train transport.

The missions are very well paced, going from frantic full scale battles to Infiltration missions that require a touch of stealth. There are a good variety of enemy and friendly vehicles, ranging from tanks, mechs, artillery, helicopters, and more. The battlefield really comes to life with everyone fighting and dying around you.

Mission difficulty ranges from moderate to insanely hard. One missions that has you protecting a C6 transport plane and the final missions are brutal, and will test you piloting skills to the limit. You have 4 weapons at your disposal from the start. You standard Cannon, good for heavily armored targets, a machine gun for lightly armored targets, homing missiles and RP bomb-droplets that do massive damage, though come in very limited quantities. You can resupply with supply choppers that will fly into the conflict zone periodically, though you will have to protect it from enemy attacks.

The only real grippe with the game is that it is short. With only 10 missions, 8 main and 2 training, it can be beat in about 4-5 hours. You are rated at the end of every mission, so there is incentive to replay missions again. You can adjust the difficulty, which leads to a greater challenge. Plus the missions are so fun, you will want to replay them and crush the enemy once your are an experienced mech pilot. 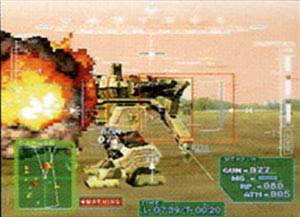 Controls: 8
While the controls seems awkward at first, they soon become second nature. You can cycle between 2 forward and reverse speeds, slow and fast. Added mobility comes with the ability to move your torso while going straight and strafing.

You are equipped with jump jets that will let you hover momentarily while moving in the air. You can cycle between your 4 weapon with the touch of a button and toggle night vision with another. Controls are very responsive and well executed, especially when using a 3D control pad, which is supported but not required.

Affordability: 7
Being slightly uncommon, going for about $10-$20 bucks on ebay, this is a must have for actions/mech fans.

1996 you said? Wow! Pretty amazing graphics, and I thought the Saturn were just a 2D powerhouse. Another excellent post racketboy!

glad you liked it!
But gungriffon wrote the review, not me 🙂

This game is awesome. I remember the first time I played it thinking how the hell do I complete a mission? Then, once I accidentally walked off the top of the boundary I realised that this is what you have to do. This is my only gripe with the game. It is fast-paced, exciting and great fun to play. Two thumbs up!

Doesn’t this one compatible with Saturn Twinstick?