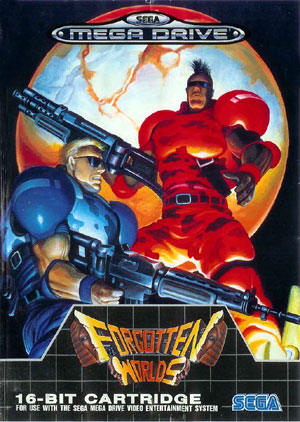 With so many unique and interesting games from the past out there, I obviously don’t have time to review them all myself. This time around we have racketboy.com contributer, Mega-Dan reviewing one of his favorite under-appreciated gems, Forgotten Worlds for the Sega Genesis/MegaDrive.

Introduction
Forgotten Worlds is similar to a horizontal scrolling shootem’up style (shmup) space game, except that instead of playing as a space ship you are a flying man and you have a small satellite that follows you around and has a gun as well. How does he fly? Who knows. Where does his awful dialog come from? Also unknown. The second big difference between this game and the standard space shooter is that you can spin your man around and shoot in any direction you wish, which is what makes this game so good..in the arcades but not so much on the Genesis where you only have two buttons to spin your man.

Imagine playing Robotron on the Nintendo 8-bit system controller and you can imagine the issues I had with this game. Also, unlike most shooters, instead of picking up your weapons, you pickup money. You can choose your weapons and powerups at a store. When you kill enemies they give you money and there is also money to be found all over the board, and more money in dangerous places that will most likely get you killed. This is one area the Genesis version is much better than the arcade, the arcade version’s weapons always seemed extremely expensive. This game even has a level with multiple branching paths that take you to different areas where you fight completely different enemies. Forgotten Worlds was my world when I was in 6th grade.

Graphics & Presentation: 9
There is nothing like Forgotten Worlds on the Genesis, branching paths, free control of where your guy shoots, money strategy (do I buy napalm now or save up for homing later?), but most of all the art style. The game is beautiful, even by today’s standards. 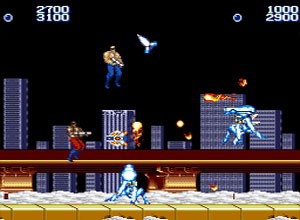 It is not so much a technical graphical achievement, as it is a what they put on the screen is so creative and so cool that you can’t help but wonder why more games aren’t like this. The first level is a little drab, but still pretty cool (flying space lizards and sandworms, pretty cool), but the art department really shines when you start fighting fire breathing cloud men who are wearing puffy 70’s suits and titans who emerge from the clouds to barf swarms of bees at you. The Egypt level is also amazing, not only because it has a great motif, but because it is the level with the branching paths, I dont think I have ever managed to see all the paths, which truly says something because I have played that game a freakish amount.

The God of War is one of my all time favorite boss characters, he has these giant fists that just come down from the sides of the screen and are just huge, and all the while he is shooting eye lighting. When you shoot his weak spots he grimaces in pain, and you can shoot his arms off, as I said this game has lots of little details and is very polished. I am not comparing these to modern graphics mind you, I am more rating the art design, I wish every game looked as cool as this game.

Gameplay: 8
This game has not aged as well as it could have. As mentioned previously, since this is the Sega Genesis this spinning and shooting mechanic does not work as advertised, in the arcade a dial was used to spin the character around, but the genesis has three buttons, one is for firing, and the other two for spinning. Now as it is digital, it is sometimes hard to get the perfect angle on your enemies. The control issues are remedied by the excellent “Capcom Classics Collection” for Xbox and PS2 which maps the aiming controls to the second analog stick on the controller, which is the perfect way to control this game (better than the original dial in the arcade!) and is the definitive way to play this game. The Capcom Classics Collection even has a boss and a few sections that were not in the original, good stuff. 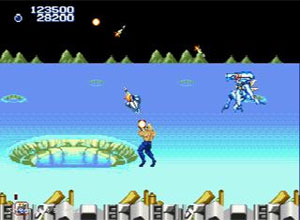 Besides the control issues, this game is solid, you spin around and blow stuff up while flying and collecting money. I was after a certain amount of time able to beat the game with the allotted amount of continues. There are a few bosses that are cheap, there is no way around that. The last boss is extremely hard, but there is a way to beat him that just requires a lot of memorization. The reason I use the word cheap, is that since your character in this game is a guy standing instead of a sleek space ship, it is MUCH more difficult to avoid enemy fire than in comparable games. Also there is the issue that just because your aiming at something properly, doesn’t mean your satellite is, but that is pretty uncommon.

Overall:
I can say that Forgotten Worlds is a excellent game, and one that game designers should definitely play so they don’t crap out a bunch of generic looking games. However, the Sega Genesis version is probably not the version to play, besides the fact you probably don’t own a currently functional Genesis, you probably do own a Playstation 2 or an XBox and there is a way better version of this game for those systems that comes with TWENTY-ONE other classic Capcom games, and it looks and controls better than the Genesis version.

Dude, the controls are great and the last boss really easy. Did you play this more than once? lol