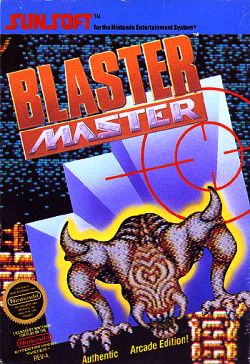 Even though there are many classic NES games that bring back fond memories, there actually aren’t a whole lot of NES titles that still hold up to decades of gaming innovations. Sunsoft’s Blaster Master, however, has enough innovation on its own that has not been sufficiently duplicated since, resulting in a unique NES game that still is worth playing every now and then.

Blaster Master is often cited as one of the most original games for the NES, due to a successful combination of the genres of side-scrolling action and overhead exploration. Like The Legend of Zelda, Blaster Master featured the gameplay mechanic of allowing players to revisit previous areas at will. Another notable aspect of the game, the player’s ability to gain powers from defeated bosses, seems to be inspired by the game Mega Man.

Graphics: 8
Most NES game graphics aren’t especially impressive, but Blaster Master probably is one of the top NES games in terms of graphical quality. If you’re familiar with Sunsoft’s style of production, you should expect to see many brilliant, beautiful colors and detailed animation frames. The graphics tend to be very dark in the side scrolling areas, yet bright and almost cheery in the overhead spots. Your vehicle is very well animated and moves very smoothly, but the animation of the enemies in both modes leaves something to be desired.

Sound/Music: 10
Blaster Master has some entrancing music that pulls you further into the game and will stick in your head long after you’re done playing it. Like the gameplay and the graphics, the music has a great amount of variety and complements each level quite well. There aren’t too many NES games that can match Blaster Master’s musical prowess.

Story: 8
You can’t say that story of Blaster Master is generic. In fact, I don’t think you will find any other game that has quite the backstory as Blaster Master. You play as Jason Frudnick, a teenage boy who fell into a humongous underground cavern after chasing his pet frog, Fred, who has become enlarged, due to exposure to radiation. There, he discovers an all-terrain battle tank. As he explores the underground world, he must find the underboss of each of the eight levels and destroy them. 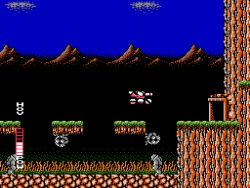 Gameplay: 9
Jason begins the game in his tank with a limited selection of abilities. It can move horizontally, jump relatively high, fire shots from its cannon, or use special attacks after finding ammunition for them. As the game progresses, however, Jason acquires new abilities for the tank by defeating the bosses of each level. Each upgrade affords a different style of gameplay. Along your journeys, you may receive upgrades for water movement, hovering and the ability to climb walls once the correct attachments are found.

Jason may leave the tank at any time to explore surrounding regions (and he will be required to in order to progress in the game). However, his armor and attacks are weaker outside the tank, and falling long distances will cause great harm to the unprotected Jason.

Although the game is divided into separate areas, the levels are maze-like and a bit confusing. There are times where you must hop out of your vehicle and look into various doors. The game then switches to an overhead mode wherein you explore and destroy things.

In this overhead mode, Jason can use either his gun or grenades. Although the grenades deal more damage and are required to defeat some bosses, they are difficult to aim properly, as throwing a grenade a long distance requires a moving start. Jason’s gun is fairly weak at first, but by picking up certain items, its shots become stronger and gain a greater range. Many of the doors simply serve as areas to power up Jason and there are three extra weapons for your vehicle to use (homing missiles, three way missiles, and thunder zaps) which are only found on foot. But one door actually contains the level boss. Once you defeat a boss, you will receive a power that will give you the abilities required to access the next level.

The difficulty level is very high in Blaster Master and many gamers exploit an programming flaw in order to beat many of the bosses. Fortunately, Blaster Master’s difficulty builds up gradually as you progress, so it at least gives you an opportunity to build up your skill. Like the Zelda games, there can be a bit of a challenge in exploration and there is some backtracking required.

Like most NES games, the controls are pretty simple and your character is quite responsive. In some levels, the control is a bit more challenging. In ice levels you will find that the terrain is quite slippery and may lead to some mistakes.

I must admit, there isn’t a high amount of replayability with Blaster Master. It is a lot of fun, but you probably won’t pick it back up until you are bored and/or nostalgic. 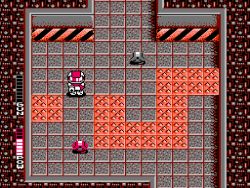 Affordability: 10
An original copy of the NES cart will only set you back a few dollars, so if you still have an NES and are looking to round out your collection, you might as well pick this puppy up.

Of course, the game ROM should also be quite easy to find and NES games can emulated quite well on a variety of hardware. (the Dreamcast is my preferred NES emulation platform)

Overall: 9
I think that you will find that Blaster Master is at least worth a try via an emulator and has quite a unique gameplay style that seems to be a combination of Megaman action the exploration of Metroid and Zelda. Once you memorize the levels and where the boss door is at, it gets a bit old, but is still fun to hop into and play.

It never reached critical acclaim, but it is widely recognized as having some of the best gameplay available for its time. It did receive a bit of a fan following over the years and a couple of sequels were eventually produced for the Gameboy Color and the Playstation.

I don’ know if you’ve tried it.

Couldnt get into genesis blaster master Returns or whaterver its called. Have to check out the playstation version, but the NES version is fantastic.