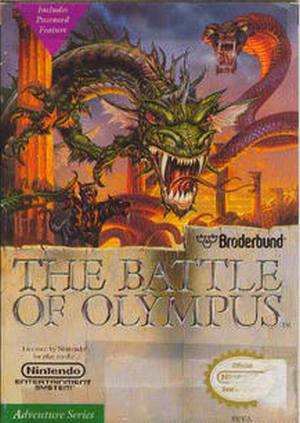 With so many unique and interesting games from the past out there, I obviously don’t have time to review them all myself. This time around we have racketboy.com contributer, SegaVega reviewing one of his favorite under-appreciated gems, Forgotten Worlds for the Nintendo Entertainment System.

Introduction
Back in the days of the NES, if a game was not developed exclusively by Nintendo there was very little (if any) coverage about it in the Nintendo Power magazine. There was no internet back in the day so your only source of info was from your friends at school or your bimonthly issue of Nintendo Power.

Besides not getting the proper attention that it deserved The Battle Of Olympus is also a game that is near and dear to my heart which is why I chose to write about it. I was always fascinated by Greek mythology as a kid so as soon as I heard about the release of the game I knew it had to me mine.

Now most will dismiss this game off as a Zelda II clone but if you took the time to play it you will agree that it was so much more than that. The Battle of Olympus is one of those games that was overlooked by many NES fans. It was made by Broderbund, a company that made a slew of very good NES games that never really got the acclaim they deserved (The Guardian Legend, Legacy of the Wizard, etc). Battle of Olympus plays a lot like Zelda II.

Story
You play as Orpheus, whose goal is to defeat ancient Greek enemies and rescue your woman. You go through different worlds and battle bosses that represent their mythological counterparts. This game is a great translation of the world of mythology into a video game! Basically in this game, you play a hero (whom you name when you start a new game) who has lost his love (the heroine, whom you also name). Now, with the Greek Goddess of Love, Aphrodite, encouraging the hero, he sets off to rescue his girlfriend’s soul from Hades himself! 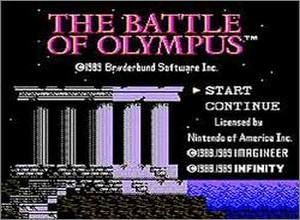 Throughout the journey, Orheus will meet the Gods and Goddesses of Olympus, such as Zeus, Hermes, Athena, Apollo, and Poseidon. Most of the hero’s immortal friends, along with an old witch living on the island of Crete, will provide you with all kinds of helpful items and weapons. There are ten landmarks, and the last one’s entrance is hidden.

Alot of the enemies are easy to beat at the beginning, but as you explore the entire nation of Greece, you will find enemies that are hard or even impossible (so to speak) to defeat. Of course, it takes strategy to defeat the further enemies, especially the mini-bosses. Some of the enemies can also be pretty annoying, especially the ones that are likely to push you into a bottomless pit; you’ll know what I mean in no time at all.

Next, there are, not one, but two kinds of currency: first, there’s red olives. You can collect up to 99 of them. You’ll definitely need them if you’re trying to buy something from a God or Goddess. If you fail to pay the price, however, you might lose a piece of your inventory! Also, if the hero is slain, the total number of olives at that time will be divided by two, and you will lose that quotient of olives! And, there’s salamander skin, which can be found only in the snake pits of the cavern area, Argolis. You can hold a maximum of 20 skins; and, you’re going to need them all to get something good from the witch of Crete Island. Once you’ve traded the skins with the witch, you won’t be able to tan any more snakes’ hides. I won’t go in too much detail since I don’t want to give out too many spoilers for those who would like to try out this game for the first time. 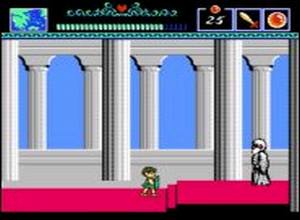 To sum it up though, arguably Battle Of Olympus in my opinion is one of the greatest NES games made and certainly one of the least talked about or played titles out there. There was also a GameBoy version made but sadly it was never released in the USA. Following the same concept that The Guardian Legend took as it spawned from Legend of Zelda, this game follows the concept of the sequel, Zelda II: The Adventures of Link. Zelda fan or not, this truly is a great game. As far as NES standards go, this game gets very high points from me and may as well from you.

I can’t tell you how frustrating it is (although you probably know) when I bring this game up in a discussion about great retro games and no one has heard of it. It’s great to hear some praise given to a game that I also thought was one of the best NES games of all time. This game actually got me to study Greek mythology when I was a kid! Also, this game had some of the best music of any game. I am a musician and I have studied, figured out and recorded almost every track from the game. Unfortunately, that was many years ago on some outdated equipment, but I will be working on redoing a medley with my new equipment sometime. Keep on spreading the word on this timeless classic.

When the heck is this going to come out in virtual console for the Wii? It was my favorite Nintendo game as a kid.

Don’ you get to ride Pegasus? Loved this game!

Wow! Reading your review made me remember this amazing game!!!!! Def one of my favs as well my friend! Way underrated and the music is amazing!!!

I played this game with my friend from start to finish about 10 years ago. We didnt even have the instruction manual but I have to say it was one of my favourite RPGs ever

I am also obsessed with “Battle of Olympus”. It is probably my all time favorite game, along side the Zelda series.

As a life long fanatic of Greek mythology myself I cannot begin to describe how influential this game was/is to me. And yeah, it’s too bad it was overshadowed by Zelda II and largely ignored and then forgotten by the gaming community.

I hope to see it on the Wii for a proper modern release!

This is one of the games I have looked forward to playing again since I bought my wii, I have found a way to play this game online, but it is difficult to move him with a keyboard. I cant believe they have not put this on the console yet, I love the Zelda series, own every title and this game is just like those, even better than the first 2 Zelda games if you ask me. I thought I was the only one who longs to play this game again, nice to see that others liked it as much as I did. Lets get a petition going or something lol

One of my favorite NES games of all time!!! I love Battle for Olympus and would love to have it on the VC, eventhough I still have the NES cart.

I love this game. I’ve got the right game. I remember being 8 or 9 and being kind of scared while playing this game mostly due to the music but something about greek mythology also scared. Games that make me feel like that are the most memorable to me.

This game is my ALL TIME FAVOURITE!

I loved this game growing up…Its good to see a game that embodies the Greek culture….Very nice and well deserved review written above. It’s necessary to preserve this game and for a contemporary version to appear on Wi….

I really liked this game too. Kid Icarus was another NES game that was inspired by Greek mythology. They were both very good games, and I must admit that they had an impact on my psyche. I played these games in high school, and they definitely increased my interest in the Greek mythology that we studied in English class. I downloaded the roms and a NES emulator, and I can play them on my PC now.

This was the greatest game ever created for the NES !! This brings me back to the basement days where me and my friends would play this game all day and all night for days !! It was a bitch when the console would freeze up and you had to start over again at your sve point….you all know what I’m talking about.

I’ve seen an English Game Boy ROM for this. every little detail was perfect.