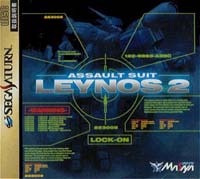 One of my first impressions of this game was “Mechs meets Metal Slug”. It’s an impressive but very tough 2D Mech shooter with some spectacular graphics and gameplay. It never made it over to the US, but it is definitely worth looking into if you are a shooter fan.

The original Assault Suit Leynos, renamed Target Earth for the American market, was a classic action mech game for the Sega Genesis. A great story, well-drawn mech animation, and an insane difficulty level grabbed many fans’ attention. There was also a Super Famicom game called Assault Suits Valken (released by Konami as Cybernator here in the U.S.), which cuts back on the difficulty but improves on the graphics.

This sequel for Saturn merges the old-school feel with the improved graphics and sound of the 32-bit system. Excellent explosions, animation, and that insane level of difficulty are back. You will need to load up your mech with weapons to deal with the hordes of enemies.

Graphics/Presentation: 8
The graphics are very sharp and look superb for a 2-D side scroller. The bosses are HUGE and the explosions are top notch. The mechs look good and have the detail of the weapon they are carrying. The menus show your weapon in an impressive 3-D style rotating picture. The only real problem in the graphics department is when you are fighting these HUGE bosses there seems to be a small slowdown effect — but most similar games (like Metal Slug) have this issue as well. 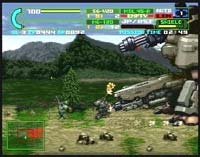 The game also has a cool zooming effect similar to some SNK 2D fighters. This really lets you take a look at the surrounding area and helps you plot your next move against what’s coming up.

The biggest disappointment, however was the opening FMV. I found it hard to believe that a Japanese software house made an FMV opening this badly. It is both low quality it terms of both content and video quality.

Music/Sound: 8
The music and sound effects are quite nice as well. The music does sound like the earlier Assault Suit games and there are also plenty of loud, meaty explosions as well, along with constant machine gun chatter.

Gameplay: 8
You pilot a mech equipped with various weapons while waves of enemy mechs attack you and your fellow Assault Suit pilots. Your energy meter can go down pretty quickly. Luckily your Assault Suit is equipped with a shield that will deflect most enemy attacks — however, the shield has a life span – and once it’s gone, it’s gone until the next level

Your Assault Suit can fire in any direction, which can be kind of annoying when you’re trying to target a specific enemy. There is also an auto-aiming mode, however, which makes targeting significantly easier. The game initially takes a bit of time to get used to, but eventually you will find that the controls are very tight and responsive.

Leynos 2 has nearly 50 different weapons, eight different mechs, and you have to earn them all as you go through the game. ASL2 also has a grading system — the better a grade you get on a level, the more stuff you get, like weapons, armor, devices — and hopefully a new machine. Similar to many RPGs, you can equip your devices to your mech and they modify it in some way, like make it faster, more power, or better stats.

Affordability: 8
This game actually isn’t too expensive considering it is a top-quality import. You can find it in the $15-20 range, depending on its condition.

Overall: 8
This game is definitely challenging, and I commend anyone that can finish the game. Fans of the first two games would probably be the ones most interested in checking it out, as well as gamers that enjoy a good challenge and want another great 2D action shooter for their Saturn.

Thanks, racketboy! On your recommendation I tried this game and just completed a play through. It’s fun as heck. Mission 4 is really hard (escort mission, ahh!), but besides that, it offers a reasonable challenge level. Definitely one all should check out.

Glad you enjoyed it! And yes, it is quite challenging.
I need to pick it up again sometime 🙂

Just got it through eBay – having a hard time even making it through the first Mission – but it is a really good game!

I think for one the successor is Armored core 4. I find the game has a fascinating aura. The game “Assault Suit Leynos 2” has always filled me with enthusiasm as a child.