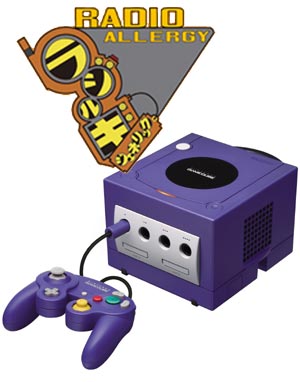 Even though VG Cats would have you believe otherwise, the Nintendo Gamecube is not yet dead. The Gamecube seems to be taking a page from the Dreamcast’s book of survival by bring 2D shooters in at the last moment to satisfy hardcore gamers.

In fact, as reported a while back, the Dreamcast shmup, Radirgy (which also went by a slew of other spellings) is indeed following the footsteps of Ikaruga and others shooters by transitioning the the Gamecube.

What is interesting and somewhat surprising, the cell-shaded shmup is actually slated to be released in the US under a more English-friendly name, Radio Allergy. (thanks to ShootTheCore for the tip)

Publisher, O3 Entertainment has stated that the game has February 2007 as a target release date. Strangley enough, Amazon.com already has a listing for the game (with a December 31 release date) with a price of $19.99.

This shooter was quite good, perhaps this port will show this great game to new players…

And we’ll get to practise our English. Nice and educating, that.

Oo-er, that’s the third time now that a rare Japanese Dreamcast shump has got a western Gamecube release (The previous two being Ikaruga and Chaos Field). This is good news for those of us who don’t want to pay through the nose for the original imports! Bring Under Defeat over next!

“The Gamecube seems to be taking a page from the Dreamcast’s book of survival by bring 2D shooters in at the last moment to satisfy hardcore gamers.”

Ugh… don’t even try to compare the holy grail that is Dreamcast with that…. toy (to say the least).