This remake retains all the original levels and gameplay elements so it will remind you a lot of the original. This also means that the game is only an hour long, so don’t expect this to keep you busy for to terribly long unless you like trying to beat your old records.

Anyway, I hope both this and the upcoming high-definition remake of Super Street Fighter 2 will start a trend for more HD remakes of popular classic. (Forum topic: Which Games Would You Like To See Remade in HD?) 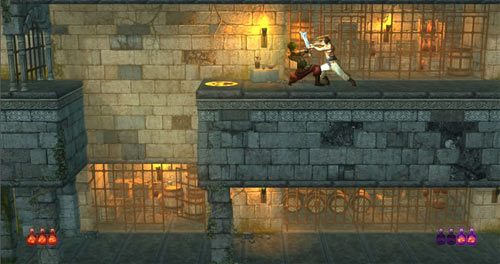 GamesRadar
“POP Classic, priced on the high-end for XBLA titles at 800 Microsoft Points (US$10), is a faithful recreation of the title that started the franchise. The map layout is identical to the original, but that doesn’t mean this is the exact same game. In fact, developer Gameloft has made some welcome improvements to POP. The graphics are the first and most notable change. While most “enhanced” XBLA titles throw in some stylish explosions and call it a day, POP Classic has been fully redone to be on par with (and perhaps even better than) Prince of Persia: The Sands of Time. For an XBLA title, that’s a high level of quality. The palatial backgrounds in the later stages are gorgeous and the animations are fluid. In fact, the animations in POP Classic rival some full-price Xbox 360 titles.
Beyond the graphics, Gameloft has added one checkpoint in almost every level. This is a great help, because it’s not always easy to make it through the treacherous pathways of a full level without dying. The combat system, difficult for the wrong reasons in the original version, has been refined. It’s still very tough at times, but it is enjoyable. While the early battles might fool you into thinking combat is merely parries followed by attacks, the second half of POP Classic proves this wrong. You’ll sometimes parry an attack only to have the enemy quickly respond with another attack, never allowing the chance to counter. This can feel cheap, until you realize that you can still parry these attacks as well. Combat in the latter stages is often a long string of blocks and evades on both sides. Button mashers will find a sword stuck in their gut more times than not.”

GamingNexus
“Like its computer counterpart, Prince of Persia Classic has some rather interesting control choices. Because the game’s emphasis is on the Prince’s amazing animations, the controls can be somewhat unruly. The control is a bit fidgety, and moving our hero into specific locations is often tricky (sometimes to the point of you accidentally falling into a giant hole and dying). But the good news is that it doesn’t take long to figure out how the Prince moves and play this game like a pro. This remake also gives you a few different choices on how you control your character, so now you aren’t forced to push up to jump, you can simply push the jump button and pull off the move. The fact that so many of the moves are mapped to the various Xbox 360 control buttons makes this a much easier game to get into, had they left the controls as they were back in the Apple II days I suspect that nobody would want to play this game.

One thing you can’t say enough about is the amazing graphics. While this retains that original 2D look, the polygonal graphics really shine. I dare say that this is one of the best looking Xbox Live Arcade games yet, from beginning to end this game looks absolutely fantastic. This game was never about huge bosses and Hollywood-style explosions, so it shouldn’t surprise you that the best parts of the graphical update are the minor things added to the backgrounds. For the first time ever this castle actually has character, from the dreary swamp-like basement to the top of the castle (that stands above a major city), the backgrounds shine every step of the way. Couple this with the amazing animation and you have one hell of a great looking game.” 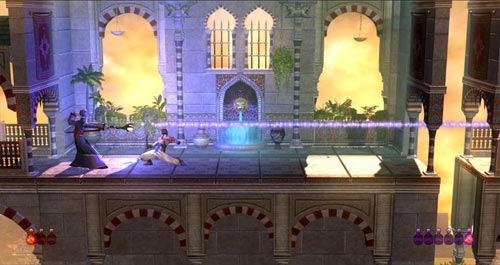 TeamXBox
“Two other gameplay modes have been added as well: In addition to the “Normal” gameplay, in which you go level by level until you’re done, there’s a Time Attack mode, in which you try to finish the game as fast as you can; as well as a Survival mode, where you try to survive as long as you can on a single life.

Of course, there’s also a full slate of achievements—a standard 200 points spread across a dozen milestones. If you play through to the end, you’ll find that there are only a couple that really need your attention and that don’t come from normal gameplay. For example, there’s one in which you have to kill a guard by running him into one of the floor-to-ceiling “slicer” traps or get him to drop onto a spike trap.”

GameSpot
“For its time, Prince of Persia was a very impressive-looking game. Sure, the environments weren’t anything spectacular, but the way The Prince was animated really brought the game to life. The way he rolled, jumped, grasped a ledge, and wielded his sword looked smooth and lifelike. Now, thanks to updated graphics, these moves look just as impressive as ever. There’s a wide array of realistic-looking animations, and the transition from one to the next is seamless. The Prince now resembles the character from the more recent games and is nicely detailed, as are the environments, though there isn’t much variety to them. On their own, the cutscenes that play before each chapter aren’t anything amazing, but for a downloadable arcade game they’re impressive, and they tell the story adequately. There’s not a tremendous amount of audio in the game, but here, the frequent absence of sound is used to great effect–there’s nothing to distract you from the fact that you’re dangling from a ledge, 50 feet above a pit of spikes.

The only thing that’s disappointing about this version of Prince of Persia is that the original game doesn’t appear to be part of the package. Sure, its punishing difficulty might not hold up all that well today, but its inclusion would have been nice, if only to show how great of a job Gameloft did on Prince of Persia Classic. Other developers should take note: This is how you bring a classic game to a downloadable service.”
EuroGamer
“The combat has also been substantially upgraded with a deceptively simple two-button swordplay system. The X button sees you attacking while A defends, but context is king here, as the effect of your button press is dependent on the state of combat itself. Perhaps the Prince will dodge an incoming strike rather than parry it, opening up a new attack possibility. Perhaps two killing blows will collide, resulting in a clash of blades. The key here is in how you to respond to every eventuality – how you read the state of play and what your next move will be. There is obviously a certain logic to it, but your instincts master the basics first and that’s key to the appeal. These new game variations form the backbone of the game’s longevity once you’ve completed it…

Survival mode is where it’s at in terms of ultra-difficulty – completing all levels without a single death requires a superhuman level of dedication. Just as it was 18 years ago, Prince of Persia is still a game where traps mean instant death and one miniscule error can blow an hour’s worth of hard work. Even in normal mode, this utter ruthlessness is one aspect of the original that doesn’t sit well with present-day gaming sensibilities. The addition of mid-level checkpoints helps, but sudden death is still a remarkably brutal, frustration-inducing element.

Longevity is boosted still further with the Achievements; getting your full 200 points’ worth is going to take some effort. In general, they are well-paced – most of them being awarded for completing key segments of game action, such as finding your sword, beating specific opponents or completing harder puzzles. Top score is reserved for finding every potion and beating Survival Mode, but I for one liked being able to accrue decent levels of gamerscore without having to indulge in stupidly obtuse gaming chores.”

That’s really badass! I can think of a bunch games that would be awsome remade either with HD 3D graphics or HD 2D sprites.

Ristar remade with 3d even if it was only a sidescroller (actually that may be the only way to go) would be great.

héhé, i’ve write same kind of article in french in my blog : http://cyborgjeff.untergrund.net/wordpress/2007/05/17/moi-aussi-je-veux-un-prince-of-persia/