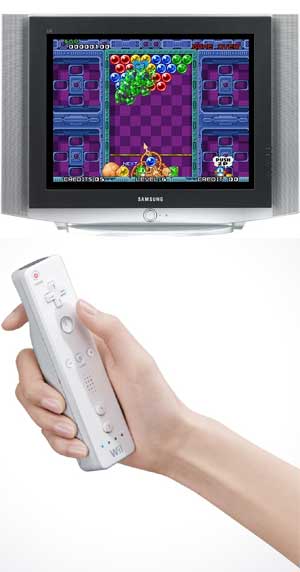 It’s already been demonstrated numerous times that the Wii’s motion-sensing “wii-mote” can take modern game genres and make them more engaging (see the Wii’s new commercials for a demonstration), but we haven’t seen many examples of taking old-school 2D games to the next level (Metal Slug being the only one so far).

Majesco, however has recently published more information about their upcoming remake of Bust-A-Move (aka Puzzle Bobble) that will take full advantage of the motion detection all while keeping the old-school feel.

If you aren’t familiar with the series, it is a puzzle game that has multi-colored bubble you need to pop. At the bottom of the screen, the player controls the angle of a fixed cannon that fires semi-randomly colored balls in a straight line. When you think about it for a bit, the Wii controller is actually a perfect fit for the game — possibly better than a standard controller since you can move the cannon from side to side much quicker. (Accuracy, on the other hand, may be a bit of a challenge).

While Majesco did not confirm the control scheme lineup, I would think that it would be a safe bet that a standard control scheme would also be supported via the Wii-mote’s D-pad, Gamecube controllers, or the Retro controller.

If both control schemes are implemented, you can be sure that this will be THE next-gen title to own for anybody interested in puzzle games.

Oh! And in case the control schemes weren’t enough to get you excited, Bust A Move Bash will also blow other games in the series out of the water with its multi-player options due to its support of up to eight simultaneous human players. This may push Bust A Move Bash close to the ranks of Saturn Bomberman for best old-school party game.

I will take all challengers in Bust A Move. (The only game my friends don’t kill me at)

I wonder how this will feel? I could see it being better or worse, I’m sure you can always just use the standard controls too so it’s a win-win situation.