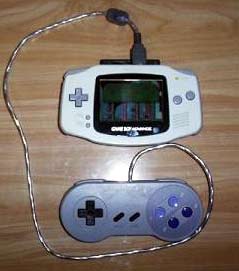 Sure, you can re-purchase all those SNES to GBA ports, but wouldn’t you want to play the actual SNES games on your GBA?

SNES Advance is a fairly new project to get the best SNES experience possible out of the Gameboy Advance. From the site:

” SNES Advance is a program written for the Gameboy Advance which emulates the Super Nintendo Entertainment System. It is coded almost entirely in ARM assembly and is heavily optimized to be as fast as possible; however, some games may run slowly or not at all. This is because of the limitations of the Gameboy Advance and unemulated features respectively.”

This project looks very promising and they aren’t planning on the growing popularity of the Nintendo DS to slow their project down. They even have a version of the emulator that works with a modified SNES controller (as shown in picture).

There is a pretty comprehensive compatibility list available along with screenshots. Games that run very well include Super Mario World, Super Metroid, Castlevania, and a slew of Megaman games.

wow it is pretty cool, but the thing that i really don’t like much is that you have to plug the pad with the advance…

the modified SNES controller what is the pinout of it and how to wire it to the gameboy advance?

Play snes roms on the gba,sounds cool right,well uh maybe? Despites the gba being more powerfull then the snes,however it has it’s limmitations,like only having: 4. Action buttons as opposed to the snes 6 action buttons,also the gba has only 2 8bit dac’s will the snes has 2 16bit dac’s for audio,also the gba lacks many features builtin like mode 7 and hi-res mode,trough many limmitations has been overcome or compensated,sadly not for audio,but they could,ve tryed to emulate snes audio in 4 bit,since all snes audio is compressed 4 bit( but cranked up to 16 bit by the snes), but that will sound horrible on gba.
It’s amezing how nintendo had (semi automatic??) ported many snes games to the gba,again concidering the gba limmitations.