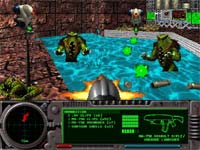 Bungie Software‘s first successful FPS series, Marathon is availible for a free download and is playable on the Sega Dreamcast.

Bungie Software released the source code of the Mac OS version of Marathon 2 under the terms of the GNU General Public License in January 2000, Since then the game has been enhanced and extended under the name of Aleph One.

Aleph One has now been ported to various platforms, the Dreamcast port was made by Bero, and although it’s been left at an early stage, it stands as a good example of the Dreamcast being a platform for classic game engine ports.

Please note that you need a Dreamcast keyboard and controller for this image!

Also note that due to the Aleph One Dreamcast port being left at an early stage by Bero, there is currently no VMU save support with the Marathon games.

Image presented by: The DCEvolution Team