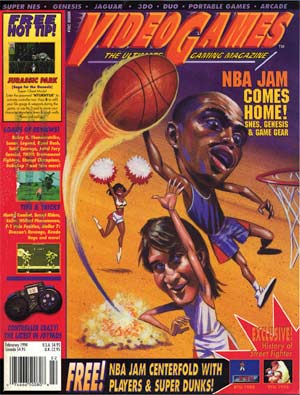 The mid 1990’s were some of the most competitve and nostolgic times in video game history. 1994, in particular, was an interesting year as there were a large handful of consoles on the market (SNES, Genesis, Turbo Duo, Jaguar, 3DO, Sega CD) and Street Fighter 2 and NBA Jam ruled the arcades and were best-sellers on the consoles.

This week I chose to highlight the February 1994 issue of Video Games Magazine because it highlighted much of this industry fury quite well.

Page brings back a blast from the past in the debate over violent games such as Mortal Kombat and Night Trap. Sure, we still have a similar debate today (this video sums up the current situation), but it’s interesting to compare Night Trap (a look back) and Mortal Kombat to Grand Theft Auto and the wide array of First Person Shooters we have today.

Page 48 kicks off a feature on The History of Street Fighter. Of course, at this point the article only goes up to the end of the Street Fighter 2 variants, but its still a good read nonetheless. On page 84 I was pleased to find a feature on import games. Some of the featured titles eventually made their way to US store shelves, but others may have been forgotten.
The issue is filled with tips, tricks, and guides for a number of 16-bit classic such as Zombies Ate My Neighbors (pg 32), General Chaos (pg 38), and more. There are also a decent amount of reviews includes ones for NBA Jam, Lunar, and Eternal Champions. And finally, you can find advertisements for games such as Lunar: The Silver Star for the Sega CD (pg 13) and Wolfenstien 3D for the SNES (pg 43) in addition to the Atari Jaguar console (pg 8).

Feel free to share any interesting tidbits you stumble across. You can also find additional vintage gaming magazines in the Downloads Category.

Be sure to subscribe to my feed or sign up for email updates to keep on top of my weekly magazine-to-PDF feature.

Many thanks– I used to love reading this mag when I was a kid.

we love your magazine,,yours are amazing i love games olders