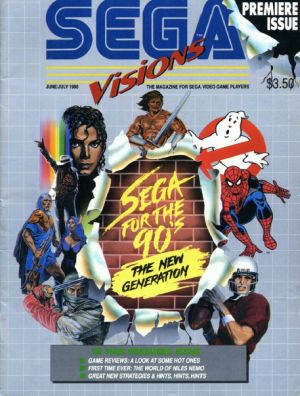 The first magazine scan I posted a while back was mistakenly labeled as the first issue of Sega Visions. However, this weeks PDF is the real deal. The June/July 1990 issue of Sega Visions is the publication’s premiere and carries on the tradition of early gaming magazines by serving as a booklet of glorified advertisements.

My abosulte favorite piece of this issue is in the Game Doctor section (a Q&A department) on page 7. A reader writes in…

“First it was 8-bit games and now it’s 16-bit games; shouldn’t I just wait for the 32-bit game systems to show up next yet?”

While the question is entertaining enough, Sega’s answer is all the more amusing:

“You can wait, but they won’t be here next year or the year after that, either. Remember, it’s not just power, its screen resolution. Right now home video-games are up against a technological brick wall known as the family TV set. Since Genesis pushes TV capabilities to the limit, better game graphics will depend on HDTV (High Definition TV) which is years away.”

So basically, the Sega rep is claiming that 32-bit systems (and anything about that) will require an HDTV. On top of that, they seemed to illude that high-definition sets will be fairly common within the mid 1990’s. I’d say they were a bit off on that one. Keep in mind, this was written over 16 years ago and HDTVs are just starting to catch on). Also, as many of you remember, just four years later Sega came out with the 32X, which was a 32-bit system that actually expanded the Genesis.

“Dear Sega, Several weeks ago, I purchased a Genesis Entertainment System after viewing Altered Beast and Revenge of Shinobi. My Nintendo and 26 games have been sold to a beginner.
I originally intended to supplement the Nintendo with the Genesis, but after a few hours’ playing time, I could not keep my interest in Nintendo games because of the superior sound, graphics, and gameplay of the Genesis!”

Wow. If that isn’t either blind fanboyism or a marketing person pretending to be a fan, I don’t know what is. I mean sure, the Genesis was great and all, but the early Genesis games didn’t have THAT much up on the NES. Also, what non-Sega employee ever referred to the Genny as the “Genesis Entertainment System”? I guess he was quite a mature gamer since he sold the NES to “a beginner”, so that might explain it.

On page 10, the cover story reads as a marketing piece on Sega’s push to bring the popular trends of the early 1990’s (Michael Jackson, anyone) to the electronic entertainment market in ways that 8-bit systems could not. I suppose it was a nice read to kick off a new publication and promote the beginning of the 16-bit era.

Throughout the rest of the issue, you will find previews of various games such as Psycho Fox (a strategy guide is included as well) and Alex Kidd for the Master System and Golden Axe, Revenge of Shinobi, and Phantasy Star II for the Genesis.

To round out the issue, you have the famous “Genesis Does What Nintendon’t” advertisement and a collection of Sega trading cards in the back.

Anyway, go ahead and download this premier issue below and let me know what you think. Feel free to share any interesting tidbits you stumble across. You can also find additional vintage gaming magazines in the Downloads Category.

Be sure to subscribe to my feed or sign up for email updates to keep on top of my weekly magazine-to-PDF feature.

I have the hard copy of this issue, but it was originally scanned by the great team over at RetroMags and coverted to PDF by yours truly.

(thanks again for the PDF love)

Well not so much “settles” as “settled”.

Very nice. Coincidentally, i just found a copy of the second issue last weekend at a garage sale…ha! If you don’t have #2, i’d be happy to share it with you when i get time to scan it.

I just noticed the fanboy letter that you mentioned, and I can tell you that if it is real, the person did not say ‘Genesis Entertainment System’. Sometimes a magazine or newspaper will change a letter just a little bit. I wrote in to Sega about Virtua Fighter 5 (they were doing a public Q&A type deal) and I distinctly said in my letter ‘PS3’, but they changed it to ‘Playstation 3 Computer Entertainment System’. I guess it’s a legal thing.