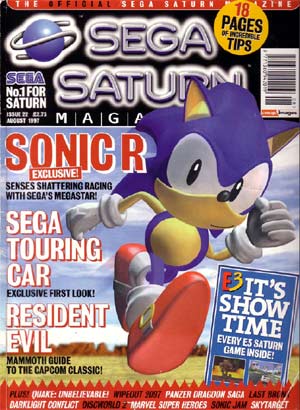 Well, it looks like the whole Magazine-to-PDF feature has been quite a hit so far. However, I’ve been getting a lot of requests for magazines devoted to the Sega Saturn and Dreamcast. Here in the United States, we were never lucky enough to have a Sega fanboy magazine during the 32-bit era. Sega Visions (Sega’s official mag) released their last issue right before the Saturn launch. It had a lot of Saturn preview stuff, but that’s about it. I have the issue in my collection, but that will be saved for later.

The United Kingdom was fortunate enough to have a Saturn publication (they always have the best gaming mags), so I’m going to share a scan of The Sega Saturn Magazine from the UK. This week we will take a look at Issue #22 from August 1997. The Saturn was nearly at its peak at this point in time and was in a heated battle with the Playstation.

The cover story of the issue was a look at Sonic R (pg 18), which was the closest thing we ever got to a new Sonic game on the Saturn. The article also includes an interview with the game’s producer, Kats Soto (pg 22)

In the opening segments of the magazine, we also find the E3 announcement for one of the “holy grails” of Saturn games, Panzer Dragoon Saga (pg 7), which was the series’ first and only departure from the rails shooter formula.

Page 15 has a small, but interesting piece on Sega’s R&D department and how they do their best to avoid releasing crap games. Looking back, I wouldn’t say they did a perfect job, but the 32-bit era was a challenging time as 3D games were still in their infancy.

The issue also has features on Resident Evil, Vampire Savior, Dragon Force, Last Bronx, and many others. You can also find part 2 of a helpful strategy guides for Shining The Holy Ark (pg 82) and part 3 of a Hexen guide (I don’t have the previous parts yet)

Unfortunately, this scan does not seem to include the advertisements, which can be a very entertaining part of the issue. I didn’t scan this issue myself (I obtained this PDF a while ago), so I’m sorry if that’s a dissappointment.

Anyway, this issue is packed with Sega Saturn goodness and I’d love to hear of any other interesting tidbits you come across while browsing this issue.

A suggestion would be to use megaupload.com or rapidshare.de as an alternate mirror in the future, these are the least hassle of the free download services and I would jump at a rapidshare link before a torrent or leeching your sites b/w.

Guess I lelp with the seeding bit too… Another great find racketboy..

Sweet, I still have all my issues of OSM-UK. I don’t have all of them though, mainly the later ones (1997-1998), which had a lot of early Dreamcast coverage, and those daft “and finally…” back pages! Ah, good times.

Ugh…this torrent’s transfer speed is absolutely dismal. Still, it’s nice to finally see a Saturn mag, as I was never really into Saturn whenever it was actually amongst the living. 😛

I’m “downloading” it again from the torrent and the speed looks fine. Maybe its just you?

Thanks and ill seed as much as i could.

In other news, I find it insulting to the American Saturn fans that there was no Saturn mags over there. That and our game cases didn’t brake all the time from being in dumb clanky cases. No wonder it did (vagley) better over here.

I had this issue and most of the others but they got ruined in my shed. I didnt realise we have the best gaming mags here in the UK. Racketboy you should try to get a PDF download of a early CVG (Computer and video games) issue as that is one of the best gaming mags of all time. If you cant I will try hunt a issue down and scan it

Wow this magazine is some terrible, immature, biased, crap. Are all console-specific UK mags like this? They absolutely never stop bashing Sony in this thing, and half the time, their facts they are using for bashing are actually false. Crazy people. But I guess the kids just loved using this stuff as ammo for those schoolyard console wars.

Hey I’m the one who scanned this issue years ago! I can tell it’s the same one I scanned because my issue has the exact same crease on the bottom of the cover as this one does, and I didn’t scan any of the ads in the mag. Can’t believe it’s still floating around on the net!

R U sure its that rare for a magazine to crease in this way?

i think the magazine is great. it had some good reviews, it gave away panzer dragoon saga disc 1 as a demo which was fantastic. i agree with mozgus though they did some sony bashing but many of the console spercific magazines over the years have bashed the competition because kids love using this stuff as ammo for those schoolyard console wars. those where the days 🙂