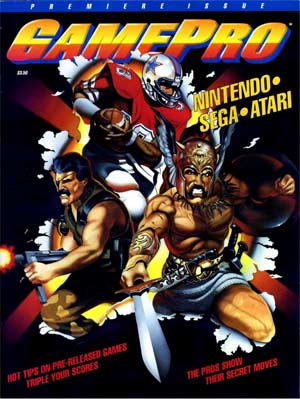 After a nice string of fanboy mags (Nintendo Power, Sega Visions, PSM), I’ve decided to share the first issue of a well-known multiplatform magazine, known as GamePro. This initial publication was released in 1989, but I can’t find a more specific date than that.

The first issue as a rather generic cover that doesn’t really promote any particular game. However, there is plenty of interesting nostolgia to be found in its inner pages.

As you first dive into the issue, you can tell Nintendo and/or Mattel paid some good money to not only get a full Power Glove ad on page 3, but also to get a two-page article (starting on pg 6) about the Power Glove and U-FORCE controller for the NES. I particularly enjoyed the little note on the bottom of the page: “Data Glove system was designed and developed for NASA as part of a “Virtual Environment Workstation”. Who realized we had space-age video game technology at out disposal?

The last decade or so I’ve missed the coverage of new arcade games like the feature starting on page 12. Sega’s Power Drift, Double Dragon II, and NARC are the arcade titles featured in this issue.

The old reviews aren’t nearly as detailed or critical as they are today, but instead almost sound like sales pitches. However, I particularly enjoyed seeing the “ProViews” of Bubble Bobble and Adventure Island for the NES, Shinobi and R-Type for the Sega Master System, and the original Mario Bros game for the Atari. Also, the first issue of GamePro even took a preview of the then Japanese import of Super Mario Bros. 3.

I actually picked up a hard copy this issue a few years back along with a bunch of other old gaming mags at my local used bookstore for 10 cents each. However, somebody else actually beat me to scanning this one. I have no idea who originally scanned this, but I had to clean up a bunch of registration messages from each page of the PDF since they apparently used some trial version of image-to-pdf software.

Anyway, let me know what you thought of the issue and be sure to subscribe to my feed or sign up for email updates to keep on top of my weekly magazine-to-PDF feature.

I originally got this puppy from Underground Gamer, but it was originally scanned by the great team over at RetroMags

Did they do away with the arcade coverage at some point? I remember being a GamePro subscriber quite a while ago (actually, while I was still in high school), and arcade coverage was still pretty good. I remember reading reviews for such major arcade releases as Street Fighter III and Virtua Fighter 3 at the time.

Thank you exalted one!

I did a search on the internet and found your website.
I have the premiere issue and wanting to know the value and where to sell it.
any idea?
It is mint.
thanks
mick16humus@hotmail.com