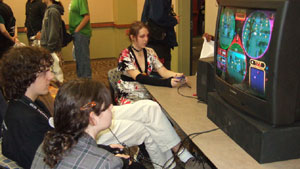 I recently received an email from RetroGaming reader, fastbilly1, that I thought I would share…

“Racketboy…. I thought you might get a kick out of this. Last weekend at Georgia Tech an anime/gaming convention by the name of Momocon took place. The girl who created this convention, a one Jesspanda, is a huge Nintendo fangirl and decided that her con must have a retrogaming room. So being the 2dfan I am I thought through several things to bring. Already Radiant Silvergun and Sexy Parodius were in my head. Then I got to thinking, if the GBA player is simply a GBA that interfaces through the Gamecube, why wouldn’t it work for Pac-Man VS. Obviously I did not read your review before this. Well I hooked it up and sure enough, Pacman had his own screen.

So last Saturday I fired it up at 9am and left to go run my boardgame room. I came back around 11am and the staffer running the room said that people were reluctant at first but their had not been an open controller for over an hour. At 11pm, the game had been running the full day with people offering to buy it on the site. Pacman Vs. was simply a smashing hit. On Sunday I switched it over to Radiant Silvergun and left it on normal and people complained about how hard it was for several hours, but that is a different story for a different time.”

I want to thank fastbilly1 for his great email and for confirming a theory that I always wondered about. My wife and I both enjoy Pac-Man Vs. on the Gamecube a great deal (if you don’t know much about the game, do yourself a favor and read my review) and it’s cool to see an alternative way of playing Pac-Man vs without an actual GBA.

Obviously, this method isn’t practical for most situations, but if you have a large gaming party going on and some spare TVs and Gamecubes, this is definately a way to make the setup more comfortable and enticing for those that haven’t yet been pulled into the game. 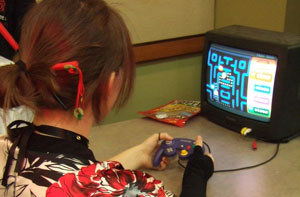 Link The Two Stations Together 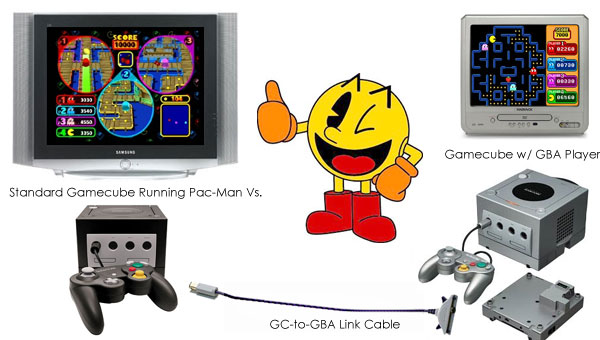 Once you have this all setup,up to four players can play without somebody having to squint over an old GBA and passersby can see more of the excitement that’s going on.

On a side note, I would assume this technique would also work for other games that depend on the Gamecube-to-Gameboy Advance connectivity like Final Fantasy Crystal Chronicles, but for a full 4-player party, you would need a lot more hardware 🙂 Pac-Man vs. is a bit more practical (and probably more fun as well)

Thanks again to fastbill1 for this sweet little Gamecube hack!

WWWWWWWWWWWOOOOOOOOOOWWWWWWWWWWWWW, simply amazing….. thanks racketboy, this article is simply spectacular…..

Right, so next time proof the email I send Racketboy because it could end up on the website…

And I am way ahead of you on your assumption. Three Gameboy players down, one to go. Momocon 2008 WILL have Four Swords, then Ill switch them out to Saturns, since odds are Ill expand my three Saturns to five by then – when you find them for cheap, its hard to resist.

wow — I wish I was in the area, I’d love to see you setups 🙂 I look forward to hearing about it 🙂

Wow, I will have to try this, got to get me another gc and tv though first.

Very nice. I always knew the Gameboy Player could be a linked GBA but I’ve never heard of anyone actually doing it until now. Is it safe to assume the main Cube could also be a Wii?

I didn’t think the GBA Player work with the Wii…?

It won’t, Perseid meant the internal wii could be just gc components.

Lol, srry he meant that you could link the wii to another gc via link for this to also work.

Yeah, once I get a Wii I could try this out 🙂

Yes the master cube can be a wii, thats how that one was setup.

And while Gamecubes are cheap, I am just going to keep using the wii as the master since I have it and it can do the workload. That and if it is glowing blue it looks like I light the box from behind.

I only have the Wii and a couple of GC wireless controllers to play other GC titles. Is there a way to play “PAC-MAN VS.” directly from the Wii??

You’ll still need a GBA for the Wii.,

Pretty over-the-top setup, but I think I’m going for this. Already have 4 controllers, GC, Wii and TV around. So I’m “only” missing small TV from flee market, the game and link cable.

Reply
Pingback: Image of the Day: Pac-Man Vs on with a Spare TV | Pineconeattack!