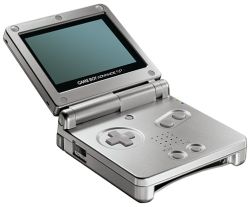 For some reason, July 2005 was a slow posting month for me. Seems a little strange since I was only working part time that summer. Anyway, here is a look back at a few of the more interesting posts from one year ago…

GBA/DS Shooter Revival Takes Shape
One year ago, we started to see an increased interest in 2D shooting games on Nintendo’s portable systems. And since then, we have seen even more examples (see here, here, and here– oh and don’t forget here) of shooting projects for modern systems. The shooter genre seems to be having a quiet revolution going on. Sure, its not exactly mainstream, but die-hard gamers haven’t forgotten how much fun blowing stuff up in 2D can be.

The Behemoth’s Next Game
It’s been a year since we first learned about upcoming game from The Behemoth (the makers of Alien Hominid). I still haven’t heard anything on the progress of the game and no release date has been announced. It looks to be a Guardian Heroes-type game with typical Behemoth style. They have created some other flash games like , but it would be nice to have new console game from these guys. Update: Figures… shortly after I post this follow-up, Castle Crashers is announced for the XBLA — looks sweet.

Console Gaming History Links
Last year I was trying to compile a list of resources that provided a good deal of information on the history of certain games, systems, and companies. I didn’t get very far and I eventually realized how much information is in Wikipedia. Nevertheless, this collection of links is still worth a read.

Where To Download Sega Saturn Games
In case you haven’t noticed yet, Sega Saturn-related topics are fairly popular on this site. And, of course, lots of retro gamers love to download games. So I compiled a short list of my favorite places to collect Sega Saturn ISOs. I have since added a link to Underground Gamer which is now my favorite download destination. You can hop on one of the “golden” torrents in order to get just about any Saturn game you can think of.