Let’s face it, there’s not a lot that Nintendo does that fans don’t notice.  When a new game is discussed, mentioned, or even hinted at, the fans are there.  When Nintendo holds a conference, fans set their schedules to make sure they won’t miss a word.  And when Nintendo so much as theorizes on a new business move, the fans are there to speculate and envision the possibilities.  When Nintendo talks, people listen.  So in 2003 fans were abuzz about a new Nintendo console planned for release in China.  It was a bold move, attempting to be the first company to crack a market that was known for its rampant piracy.  But Nintendo made it, establishing a new brand and releasing the iQue Player.

Unfortunately many of Nintendo’s further plans never materialized.  The console was never released in other regions, as Nintendo had hoped.  The games list remained small, only consisting of titles already released on older hardware.  Sales were solid but inevitably petered out due to a combination of competition (from both Nintendo’s competitors and eventually Nintendo’s other releases) and lack of interest, at least in part because the machine was difficult to crack by the black market.  While import websites like Play-Asia and Lik-Sang sold the iQue Player on release, their stocks eventually ran out.  So the iQue Player inevitably disappeared into obscurity, especially outside of China, where it would from time to time resurface on a collectors’ forum or YouTube Channel, or appear for sale at inflated prices on eBay.

In the interest of generating discussion about this obscure but important piece of Nintendo’s history in East Asia, here is the iQue Player 101. 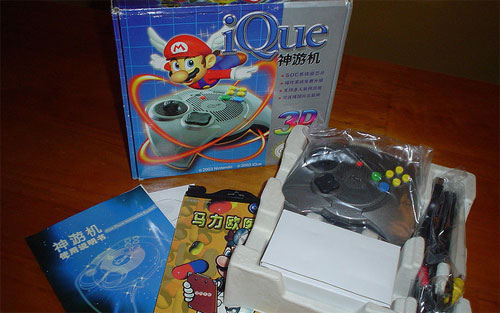 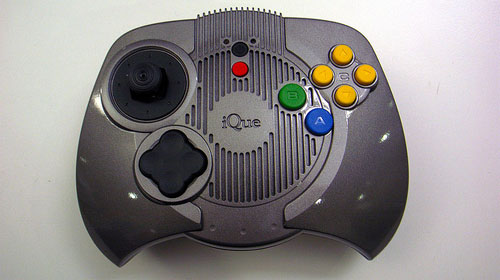 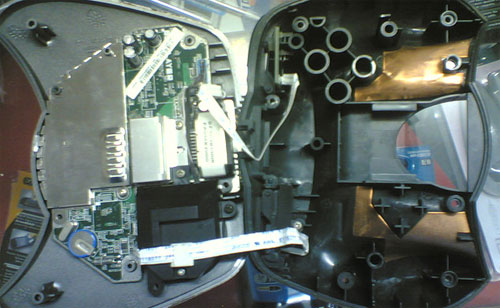 非常有意思. I’ve been living in China for a little over two years and I’ve noticed that console gaming takes a deep back seat to PC gaming. Now your article may have clued me into why this is the case. I am curious to know if the Ministry of Culture’s rarely enforced ban on consoles is still on the books. Thanks for another great read. –AJR

finally, the iQue has made it to the rackeboy archives. great job on the article Ack. 🙂

Funny, I stumbled across a page about this on the net recently. Thanks for the info about it – interesting read as usual.

Wow, I had no idea these things ever existed. Pretty awesome piece of Nintendo history. Still have my N64 here, just need to get a power brick and games.

Too bad it wasn’t released outside of China, it seems like a neat little console.

Wow! I had completely forgotten that this existed. There is one on ebay right now brand new for under 100 bucks… Someone more fortunate should probably grab it up

@SevinOseven: I was born in the US and now live in Slovenia, part of the former Yugoslavia, and in terms of retrogaming (from the PS2 on, it’s been console heavy like everywhere else), it’s all PC. I seriously got to watch somebody play Super Mario Brothers for the first time (“you can go down that pipe. Down, press down”)!!!! But I’ve seen them reminisce for hours over games like Duke Nuke ‘Em and Red Baron. And I have yet to find anyone who’s ever even heard of Final Fantasy, it’s like a black hole for JRPGs, even though they love Ultima and Wizardry.

And I think that in both cases it’s because of piracy. I mean in the cassette-format era, radio stations would broadcast the code to games: you’d pop in a cassette, record what sounded like a half hour of static, pop it in your drive, and play a new game.

That controller looks badass! You can stilol find alot of these on taobao. I’ve got an iQue Gameboy Advance SP!

I can’t wait to go to Shanghai to get myself one of these. Does anybody know if it is easy to get ahold of video games in Shanghai? Is it expensive?

@saunagamer Don’t know about Shanghai, but if you’re in Beijing then the streets around Gu Lou 鼓楼 are full of gaming shops, look for the character 电玩 (Dian Wan) in the sign above the door. Most shops only seel new school stuff though.

There’s shop on 鼓楼西大街 Gu Lou Xi Da Jie (i think its Xi 西, or maybe it was Dong 东, either way they’re both close by) called 卡姆乐屋 Ka Mu Le Wu, which is the oldest video game store in China. They sometimes stock some retro stuff, and if they don’t have any iQue stuff it’s always worth going to look at the collection of old consoles on display, kinda like a museum (Neo Geo, Commodore, Atari 2600, other random stuff you wouldn’t expect to find as well).

Your best bet in China for retro stuff in China though is taobao.com (chinese version of eBay, but waaaaay more stuff on it). Ask a chinese friend to help you buy from it if you don’t have an account. I typed in N64 iQue and this was the first item that came up, the seller is in Shanghai as well:

Another place I’m going to go check out this weekend in Beijing is 虹桥天乐玩具市场 Hong Qiao Tian Le Wan Ju Shi Chang, a tall building full of small shops that sell all kinds of toys. I heard it’s a good place to get famiclones and pirated NES carts, can’t wait!

很好！ Thanks for the advice! I was looking forward to attending 复旦大学 but after reading your advice I feel like I’ll barely leave my room. 😉

I leave for Beijing in late March. Gonna hit up every place you name dropped.

@saunagamer Hey dude, haven’t been on this part of the site for a while so missed your comments. Hope you had a good time in Beijing and found some good gear. If you need any other advice on China stuff drop me a line!

I’m also going to Shanghai within a few days, but is the iQue player still available ?

Do I have to buy second-hand ones or is it still producted ?

And finally, are there shops in shanghai that sell it, or saunagamer didn’t find any ’cause there wasn’t any ?

This NEEDS to be updated.

Just curious: what part in particular needs to be updated most?
I’m in the middle of updating a bunch of posts and I’m trying to prioritize the work.
Thanks!

While this article is much better than a lot of articles I’ve seen, there are some inaccuracies, especially now that the download service is mostly down:
The most glaring is ‘iQue Shenyou’ – shényóu (神游) is iQue’s name in Chinese. The console’s Chinese name is shényóu jī (神游机).
The ‘added extras’ are more like an entire N64 motherboard crammed in, making controller mods significantly more difficult.
‘Finding games outside of China’ – the download kiosks were only ever (as far as I know) in China, and iQue@Home is the same anywhere.
The time-locked demos can now be reset using homebrew software.
The operating system can be updated with a second, USB-compatible, iQue Player.
Not only is the system useless without the card, the card contains the operating system. It’s like trying to boot a PC without a hard drive in.
The CPU runs at 1.5x the speed as the N64’s CPU, and the system has about 8MB of RAM. Not only that, because of *reasons*, RAM access is about 3x as fast as the N64.
The operating system isn’t called UOS – that simply stands for ‘updateable operating system’. The iQue Menu, which is actually called SA (probably ‘system app’), isn’t even the operating system. The secure kernel is the actual operating system, and it isn’t updateable, as its hash is stored in the iQue Player’s equivalent of OTP.
The *console, not controller* takes 5V DC as input. A modern USB power supply can be repurposed for use outside of China.
The link for more info on the iQue Card is down.
The iQue Tickets (not vouchers) were plastic.
Manuals exist for every iQue Player game except 动物森林 (Animal Forest (Animal Crossing)) and 罪与罚-地球的继承者- (Sin and Punishment). There are often two or more versions, earlier and later. The manuals are treated as games; they are N64 ROMs (like all the iQue Player games) that display a still image, more or less.
iQue Player games are often quite different to their N64 counterparts. Luckily, the ROMs are now available, having been decrypted a few months ago.
The win32 console program was actually to write to a card simulator, not the card itself. (Link is also dead.) There is actually an official win32 program to write to the card, as well as an unofficial linux program to read from it.
There might be other stuff as well, but I didn’t immediately notice it. Check out iQueBrew (.org) for more information and specifics.

Wow — thanks!
I will try to update the document to reflect all this in the near future!

can games like mqrio party be on the ique if hacked?

and yet,no one ever gives videos on how to hack the ique

Method isn’t finalised yet. Do you want to watch a video on how to set up a Windows XP VM? There are a couple of videos demonstrating consoles that have been hacked if you look carefully on YouTube.

Hey, just wondering does anyone have an IQue player that they could measure for me? I need to buy one myself but I can’t find any of the dimensions of this console so could anyone help me

Why do you need measurements to buy one?

I am putting all nitntendos on a select amount shelfs in age order, but I can’t figure where every other Nintendo will go because I can’t find how big one of these are, as soon as I can do that then I can get everything in order then