As one of my all-time favorite games of my childhood, I was glad to see the original Teenage Mutant Ninja Turtles arcade game come to the XBox Live Arcade. It isn’t a deep game by any means, but it is filled with nostalgia and is loads of fun when whacking Foot Soldiers with a bunch of friends.

Since one of the great advantages the XBox Live Arcade has over the Wii’s Virtual Console (so far) is that developers usually throw some enhancements into the game to give it some of the benefits of modern gaming. The TMNT Arcade game received some of these bells and whistles like high-definition output and online co-op, but misses some small things like be 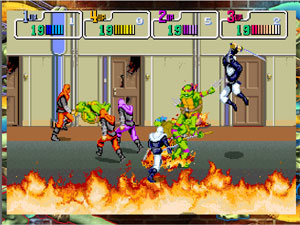 ing able to have online AND offline friends being able to play with you at the same time. It’s either all online or all offline. Anyway, for $5, I guess you can’t complain too much.

Anyway, here’s what the critics are saying…
“Overall TMNT is quite short, maybe one of the reasons for the low price tag; the other being the upcoming release of the CG movie by the same name. There is only one mode and it can be beaten fairly quickly, especially with the help of some friends over Xbox Live. The game is basically the exact same thing that was released over 15 years ago but with “stretched” out graphics and online multiplayer….

If the developers did any sort of upgrading it is not noticeable with the naked eye. One nice feature is being able to stretch out the screen so it fits nicely on any size widescreen television. This feature alone made me happy but it would have been nice to see some HD capabilities or character model / background graphical upgrades to this version.”
PlanetXBox

“As tended to be the case with arcade beat-’em-ups of this genre, the difficulty level is pretty over the top, as the maker of the game wanted to get you pumping quarters in as frequently as possible. That’s not so much a necessity here, and when playing offline, you get unlimited continues, so a good chunk of that difficulty is negated.

However, when playing online co-op, your crew is only afforded 20 continues, meaning it’s possible to lose the game altogether. That’s a smart decision, as it’s not hard to envision the co-op getting a bit boring after a while if you can just beat it over and over again with no challenge to speak of. The co-op play itself is set up pretty well. You can either jump into a quick game or create a public or private match yourself. The co-op seems to work jus 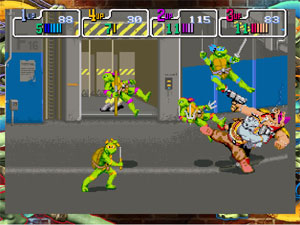 t fine, though there was some lag in a number of matches. Only in a few instances did it hinder the game, however.”
GameSpot

“The game doesn’t even have the good grace to offer up a well thought out array of Achievements for your trouble. Most require near-superhuman feats such as navigating a stage without losing health or defeating a boss without being hit by their weapon, and a game designed solely to kill the player as frequently as possible just isn’t suited for such tasks. On the other hand, there are completely pointless Achievements, such as the one that gives you zero gamerpoints for falling into a manhole five times. Is it a joke? Or an admission that in a game so lacking in depth or variety there simply weren’t enough things to do to make up the required twelve Achievement Awards?”
EuroGamer

Is the sound the same as the arcade, or did they screw it up like the ports for PS2, GC, and Xbox?

There was a Gamecube port? Where? Where?