The whole “Sony-killed-Sega” topic is a sensitive subject for old-school Sega fans. Sure, Sega had plenty of self-inflicted wounds, but in the back of every Sega junky’s mind is the fact the Sega rushed the Saturn to market to preempt the Playstation and the PS2 hype made the Dreamcast’s phenomenal head-start fizzle out quicker than it should have.

Sega Saturn owners are also especially proud of the fact that the 32-bit powerhouse was home to a number of unique games that never showed up elsewhere such as Panzer Dragoon Saga, Guardian Heroes, and NiGHTS into Dreams. NiGHTS holds an especially soft spot in many Saturn veteran’s hearts as it was the closest thing we ever got to a real 32-bit Sonic the Hedgehog game and one of Sonic Team‘s last great games of that genre.

It has been seven years since Sega left the hardware business to publish their games for other platforms. We’ve seen countless Sonic games on the Gamecube, XBox, and PS2, so you think that, by now, bringing NiGHTS to the PS2 would be no big deal. But there are still a handful of Sega fans that feel that the world has turned upside down now that the original NiGHTS into Dreams is running on the PS2. Not only does it sting a bit to see it on the nemesis Sony hardware, but it decreases some of the magical allure that the Saturn had in this former exclusive.

Now I’m not a Sony fan by any means, but I’m personally in the camp that says its a good thing to bring classics to new hardware as it keeps them alive, makes them more accessible, and gives them the modern conveniences of things like wireless controllers and quicker load times. (However, the old Sega fanboy in me does feel a little itch of resentment)

I don’t care if you are the most hardcore of Sega fanboys or not, seeing the fresh PS2 port of NiGHTS is enough to get your saliva glands cranking. As great as the Saturn original was, it was still a little rough around the edges in some parts of the graphics. As the video below shows, the PS2 version looks true to the original only with every little inch polished to a smooth and shiny finish. 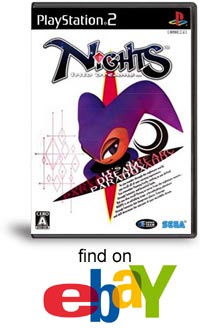 In case you are wondering about all the specifics of the port and how it compares with the original version, here is what Mozgus (who captured the video above) has concluded so far:
“Yes the game isn’t a true remake. [However,] Nothing seems to be altered in anyway that affects gameplay. Just new textures, models, effects, and texture filtering… I’ve tried the Sega Saturn mode as well, and I think it’s still slightly enhanced in terms of frame rate and maybe draw distance. It just feels like the remake mode, but with all the old assets and low resolution. You can actually see your TV switch resolutions… There is alternate music on the stages [like in the original Saturn game]. All the music in the game is in ADX at 48kHz. There are 218 tracks. Each stage has somewhere between 20-28 tracks… So far however, I’ll safely say that this is better than the Saturn original. Also it’s very easy on English speakers. Only the save screen and the hint screens are in Japanese so far.”

Yes, there may be a twinge of sadness knowing that your Saturn version of NiGHTS into Dreams is all but obsolete, but at least you know that this wonderful game may now be experienced my more lucky souls out there. And don’t forget: you still will be able to play the original on your beloved Saturn. And as the ever-so-blunt Mozgus said to those that are bitterly waxing nostalgic, “The hardware doesn’t matter. This version has been improved quite a lot, without having many flaws. This is more than you can expect from Sega these days. If people out there want a Saturn for whatever reason, they’ll buy one. Don’t try to stuff it down their throats. Multi-platform games are always a good thing as long as the overall product doesn’t suffer from it.” Well said, Mozgus. Well said.

Wow. That’s really much better. The draw distances in the Saturn version were so small, it made the game very disorienting to me. Not to mention the overall choppiness when playing as the kids, the 8px x 8px textures, and the camera being so close. This looks much much improved.

They NEED to bring this game to AMERICA and soon!

I still like the feel of playin it on my saturn with the old 3d control stick.

Amazing. It looks better without actually changing the game’s feel or gamelay. Something as subtle as removing colour-clash from a Speccy remake.

Very nice review.
I ordered the special version (Nightopia dream pack) as a tribute to this wonderful character created by the Sonic Team.

Maybe it’s just the fact that I’ve been playing the Wii sequel a lot recently, but the animation in this remake looks rather slow and stiff to me. I can’t quite put my finger on it; while it’s nice and smooth and all, it feels like something is missing. I could be wrong though.

I recently got the wii sequel and it’s not even close to the original, i need to pick this game up cause it gives you a magical feeling when playing it

We should all flood Sega’s e-mail inbox until we get this stateside!!

Got my hands on this last week and it is fantastic 🙂 but shame on SEGA for not rls this in europe/usa…….

hmmm, the game looks great (pal ps2, running on harddrive through a component cable), but yeah, the game play is ‘different’ (nights slightly slower, dash is different, links harder) and some xmas content is missing. Still worth it for fans just for the visuals!

Damn… now you’ve got me dreaming.

Ugh, I ruined my second sentence:

Wow! Graphically the game looks a lot nicer, and seems to play a lot smoother. The loading times are far worse on PS2 than in the Saturn version though. Pity it never got an english release…

DON’T WORRY, I’M THINKING ABOUT REUNITING THE OLD SONIC TEAM AND AM 2 TO REMAKE THESE GAMES TO THE DREAMCAST.

btw, I’ve been playing this Nights remake on the PS2 (first timer here, never got the change to get a Saturn) and I almost cried of happyness while playing. It was like the first time I saw Sonic The Hedgehog on my genesis back in 1991 or when I played Shenmue and Shenmue 2 back-to-back for like 10 days on my Dreamcast. 🙁
It’s a fúcking masterpiece.

(How sweet would it be to have a Nights 2 or something like that on Dreamcast… NIGHTS INTO DREAMCAST..)

I think that I would be more likely to buy a Saturn + NiGHTS than to buy a PS2 + NiGHTS, regardless of how good the remake would be, just due to resentment. Plus, then I could get Panzer Dragoon Saga, and maybe a few other good Saturn games. on the other hand, if someone ported NiGHTs to DC, I would pay a LOT of money for that. That would be incredible. It would be cool if someone were to make a NiGHTS specific interpreter for DC, à la Bleem!Cast. Still though, it would be nearly impossible, I’m sure (Saturn’s hardware being extraordinarily complicated).