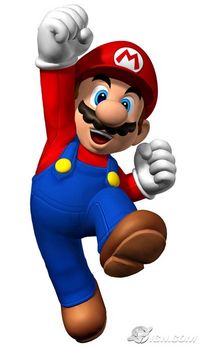 , which debuted on May 25th in Japan, sold a over 480,000 copies on its very first day at retail making it the largest ever single-day sales figure in Japan, beating oufellow Nintendo DS title Brain Training 2 (with 415,000 in first-day sales).

While I’m not sure if this trend will follow quite as well here in the US, it clear that old-school 2D action still has quite a following. The last few Mario games (Super Mario 64 DS and Super Mario Sunshine) never came close, nor did they have quite the excitement the this 2D platformer has built up.

I’m very excitied to see how things pan out for the upcoming Super Paper Mario for the Gamecube (not to be confused with Paper Mario: Thousand Year Door). While we haven’t seen a whole lot of the new game quite yet, it should bring many of the concepts that made New Super Mario Bros. successful — including the 2D gameplay.

While we have a seen a number of great 2D games on the handheld systems lately, this will be basically the first big 2D platformer on a modern console in recent years. If Super Paper Mario works out well, maybe other developers will see the trend. Keep your fingers crossed!