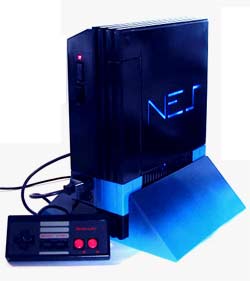 The NES is definitely one of the most popular consoles to mod. Over the last year we’ve seen a number of things like an NES turned into a PC, and NES DVD player, and much more. However kotami, one of France’s (if not one of the world’s) premier console hackers has put together one of my favorite NES mods so far.

This time around he took a standard Nintendo Entertainment System, painted it completely black, added some blue LEDs to accent the PS2-styled logo, and set it on a vertical stand.

The NES controllers were also painted back in to complement the console. Everything is done with a tremendous amount of professionalism. (See more pictures)

I don’t have a perfect translation of his French, but it sounds like he built the base out of a plastic/fiberglass material and painted it to match the PS2’s base. Of course, the modded NES still can play horizontally (not that it really matters with a cartridge system), but it’s kinda nice to have an option of orientation.

He also seemed to use 4 blue LEDs — one at each of the NES logo to illuminate it in addition to adding a cool blue glow coming out of the cartridge slot.

kotami also mentioned that as much as he loves the result of this project, he will be looking to sell it off. If I see it up for sale, I’ll be sure to let you know. In case you missed it before, kotami was also known for some other great projects such as the Mini Sega Genesis/MegaDrive.

That’s real cool. I wonder if it works just as well standing up on its side.

It probably would work if you blow on the cartridge and inside the system a little bit, classic fix for the NES

since when does modding mean painting black?

“since when does modding mean painting black?”

not to mention that the base stand looks almost as wide as the nes is, negating the purpose of having a stand/vertical position at all.

So yes, painting is a mod…

not to mention the LED and carving justifies a mod

Lovely article!
I wish I could do mods like that 🙂

Wow. How are some people saying that this is stupid, or a waste of time. It is to make it look like a PS2. It is serving its purpose. The creator did an awsome job modding this.

Okay, I liked it so much I dug out an old NES and did it myself. Not to disrespect NES with playstation 2’s numerous issues, or downplay PS2’s capabilities by comparing it, but just to make my NES look cool again. I did make a couple changes to this guy’s mod, though. Instead of carving the logo and backlighting, I had a decal made, so it looks more like the PS2. I also took the logo off the ps2 drive door and put it in. I replaced the stock (red) power light with a blue one, and painted my WIRELESS controller to match. Finally. I extended an actual PS2 vertical stand instead of the enormous wedge this guy used.

Lovely article!
I wish I could do mods like that 🙂