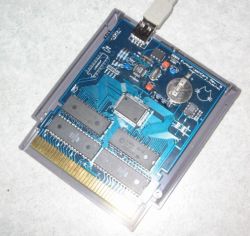 Some people like me are happy playing their NES ROMs on their Dreamcast or other emulation machine. However, there are the extra hardcore that insist on only playing NES games on a real Nintendo Entertainment System.

With an NES Flash Cart, you would have the opportunity to play all of the best NES games on your NES (original or a clone) without having to change cartridges and protect the original game carts.

I have found this project site in which this guy is planning on putting together a number of NES Flash Cart kits that you can put together yourself.

He is still trying to finish up the needed software and get other things rounded up, but he plans on selling them soon. Eventually you will be able to hook the cartridge up to your PC via USB and transfer your favorite ROMs to it. Then the cart will play just like a real game.

He has already had Super Mario Bros. 3 running off of one successfully, but he wants to make sure everything is near flawless before distributing them.

Awesome stuff. My original NES from 1989 still works great, especially since I replaced the pins. But visually, it’s very busted up. The plastic is basically crumbling at every point now. All the screws have eaten through it. Eventually I’m just ganna take the board and the other guts, and build an NES-like lego case around them. I did all the math and figured out all the colors and block types I would need. It would cost about $28 to order all the pieces online. If I ever go through with it, I’ll show you pictures.

Thanks for the heads up on this. If GrandTheftendo ever gets finished this could be really useful! I’ll post a link on Siliconera about this later today.

I notice that It cannot run games with the MMC5 mapper.

Which games used that?

Looks good to me, and it isn’t too high priced! Just unfortanate that it can’t support every mapper, so I could play Gimmick! on my NES without needing a real Famicom or cart adapter.

It’s too bad nothing ever became of this. The author ditched his plans for distribution claiming “bad design”. The PowerPak cart is an alternative available at RetroZone for $135, but not all mappers are fully supported (no MMC5) there either. Looks like you may still need to fall back on software emulation (or original cartridges) for a handful of games.

i hope that this usb cartyride could play all original nes ,homebrew,and pyrate games sothat i can play those rare games on the real console,and no longer relying mon emulaters.