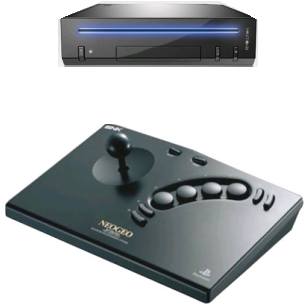 Even though, it is impressive the the Wii’s Virtual Console supports every Nintendo console in addition to the Sega Genesis/Megadrive and the TurboGrafx-16, you can’t help but admit that the Virtual Console hasn’t quite lived up to its hype just yet.

As I had suspected in the past, the Neo-Geo library will soon be added to the lineup to add a bit more punch. This was confirmed just recently on Nintendo’s Japanese site. According to Nintendo, support for SNK’s 2D powerhouse will make its way to the Wii Virtual Console over the course of 2007 and beyond. So far, this is only an official announcement for Japan — commitments for other countries have not been solidified quite yet. No game titles have been announced yet either.

One of the most interesting things about having the Neo-Geo library on the Wii is that, once much of the library is available, it will be the first time many of the games will be able to be legally purchased without paying a hefty chunk of change. (However, I’m surprised the Nintendo, Microsoft, and it’s partners haven’t published more rare and expensive games on the Virtual Console and XBox Live Arcade already.)

Also, maybe after the Neo-Geo support rolls out, we will see some good wireless Arcade sticks for the Wii. Having some of SNK’s solid fighters teamed with a wireless joystick would be a killer app for me. (Capcom is free to jump on the bandwagon with arcade-perfect ports as well)

Great news. The VC seems to sound better and better. Now, if only I could actually find a Wii in stores..

Man, a good wireless joystick would be swell, either for Wii Or just for PC.

…There aren’t any good wireless joysticks for PC, are there? Because I’ve looked and haven’t found any.

Unless Nintendo and parters do more than simply emulate, however, and start introducing features like netplay, this could all be moot.

I’m curious as to what the effect would be on the Neo Geo collector’s market. The consoles, and many games, still go for hundreds of dollars on eBay, so I wonder what will happen if all of a sudden you could buy all these games for a few dollars each on the Virtual Console. My first instinct is to say that the collector’s market would crash, but then again, Neo collectors are pretty hardcore, and many would probably turn their noses up at the thought of playing their favorite Neo games with the Wii’s classic controller instead of the Neo’s sticks.

Keep in mind that Neo-Geo collectors aren’t paying that much money just to play the game. If all you want to do is play the game, you can emulate it. They are paying the big dollars for either the collectability of having the cart or for the complete feel of playing it on a real neo-geo. Virtual Console should hardly make a dent in that.

Wow, I’m surprised that you didn’t mention the fact that MSX games will be appearing on the Virtual Console, as well.

Read about it here.

By the way, I’m really only excited about Neo-Geo because I’ll possibly have the opportunity to play SNK Vs. Capcom Chaos without having to buy a console other than a Wii. (I don’t own a PlayStation 2 or Xbox.)

I might pick up the Metal Slug games if they’re released on VC, as well, if only to not have to utilize the motion command to throw grenades, as you’re forced to do in Metal Slug Anthology for Wii. I’ll probably still get MSA, either way, though.

MSX games were actually announced before the Wii was released. This is just the first time that a released date was set.

To bad all these run at CRAPPY 50HZ in effect KILLING the gameplay,look & orignial feel/speed of the games shame on the companies involved foor not putting in the effort to make em run at 60HZ or 480p ill stick with my 720p xbox1 versions 🙂