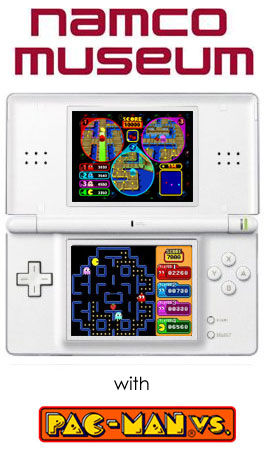 Ok, this announcement not only got me excited, but kinda freaked me out…

Just two weeks ago to the day, I published my DS Wishlist, which contained a consise list of some classic games and compilations I would like to see come to the DS.

I mentioned that I enjoyed the Namco Museum Collection GBA cartridge but would like to see a port specifically for the DS. Now Namco Museum is ported to almost every handheld and console, so this wouldn’t normally be that big of a deal. But in my wishlist, I decided to raise the stakes a little by asking for a port of Pac-Man Vs. a killer multiplayer game that took advantage of the Gamecube-to-GBA connectivity. I thought the DS’s wifi support would be just the thing that would make a remake worthwhile, however, at the same time, I figured this was just a pipe dream for the most part.

Well, today, Namco Bandai has announced via press release that they plan on releasing a $20 Namco Museum on the DS this Summer. As I browsed the list of the eight games included in the compilation, I saw they everything was standard fare. It didn’t seem like anything to get terribly excited until I took a second glance… WHAT’S THAT??? Pac-Man Vs????

See for yourself… here’s the list of games from the press release:

At first, maybe I thought I read it wrong. Or maybe there was some other Pac-Man variation that went by the name “Pac-Man Vs.”, but my quick scowering of Google and Wikipedia didn’t find anything I didn’t already know. So it looks like the Pac-Man Vs. that has been the hit of many a gaming party will be going portable and wireless.

Bringing it to the DS would definately bring the game to a much larger audience. Not only is the DS selling MUCH better than the Gamecube did, but you won’t need any relatively obscure link cables to play. And of course, having online multiplayer will increase the possibilities of finding three other people to play against.

On a side note, with such an otherwise light list of games, its a good thing Pac-Man Vs. is included to make this a better value. More recent releases of Namco Museum like the one on the PSP has many more games to choose from.

BTW: Thanks to DS Fanboy for the heads-up

racketboy……. be careful!!! it seems namco has a spy in your site….. remember my suggestions to your article about how wonderful a pac-man vs. ds version would be??? well, the dream has come true…… no cables, full wi-fi, all you need is a pretty accessible 20 bucks cartridge and a ds….. ahhh, and a a bonus, another 7 namco classics…… well, congratulations….. keep making wishlists, maybe we will see soon New SMB 2 on the DS…..

I knew ancient Soviet veterans from Stalingrad had something to do with it. Way to go guys. Now, if you could ask for a nice Atari Lynx retro cart, well, it would be sublime.

BTW, that was quite a monster interview dear racketboy.

This is awesome news. I’ve introduced many friends to Pac-Man VS., and they all love it, but this will give me more opportunities to play.

Ohwell, Ill be keeping my Gamecube version of it though.