I just got home last night after spending a few weeks at my parents’ house for the holidays. When I called my familiy to let them know I got home OK, my brother mentioned they just recieved a package address to me that was sent from Hong Kong. I thought it was fairly strange since I don’t remember ordering anything as of late from China — not to mention I wouldn’t usually have it sent to my parents’ address. 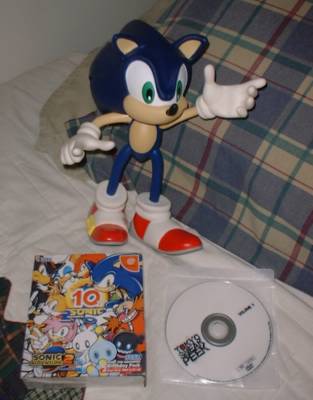 I had my brother open it up since I was very curious as to what this package contained. Turns out it was a Dreamcast Sonic Adventure 2 Birthday Pack, a large Sonic figure, and a DVD called “Tokyo Sneak Peak Vol. 1.

He snapped a picture of the contents and emailed them to me. He also mentioned, “If you don’t want the sonic I’ll take him, he has poseable everything – his hands and feet rotate and he has a hip and shoulder joint and a neck”. How nice of him 🙂

There was apparently not a note enclosed or anything, but I assume this is from Lik-Sang. I won a contest over at SegaXtreme and was supposed to win a game pre-order of my choice. They had my contact information (I gave them my parents’ address since I was going to be there for a few weeks), but I never heard back from them. The contest was a while ago, so I was hoping I was going to be be able to pre-order Chaos Field for the Dreamcast, but that never happened. I haven’t decided if I prefer this prize or not. I’m hoping to contact some people to find out what’s going on in any case.

Edit: Well it looks like it’s the Sonic Birthday Bundle and the free DVD from Lik-Sang (only $20 value). STILL don’t know why I got this.