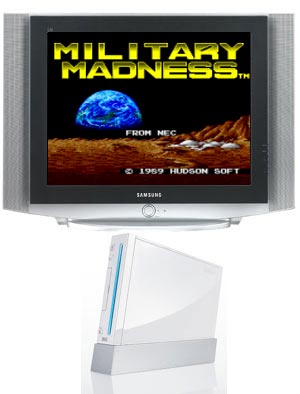 It’s Monday again and Nintendo is treating Wii owners to some additional retro selections on the Virtual Console.

The headlining title this week is Military Madness from the Turbografx 16. This precursor to strategy games like Advance Wars was one of the TG16 games that has aged the best and has inspired sequels/spinoffs on the Playstation and Mobile platforms.

Rounding out this weeks releases is the Genesis version of Space Harrier 2 and Tennis from the NES.

Neither of the later two games get me excited at all, but I would be interested to see if the 32X version of the original Space Harrier would ever make it to the Virtual Console (or any other 32X game). And an even more ambitious idea would be to port the neglected arcade game, Planet Harriers to the Wii. Of course it would be out of the question on the Virtual Console, but it is a game that could benefit from the Wii-Mote quite well.

Ok, that’s my daydream for the day.

I wholly agree with Planet Harriers, and I think Space Harrier for the 32X was pretty much the best arcade port… ever. I’m reviewing that version right now…

I remember when Planet harriers was rumored to be a Gamecube release, and I remember my hopes being crushed by it never happening. Come on, Sega, you have so many arcade games that are itching for console ports, and for these early 2000’s ones, the Wii would be perfect. It wouldn’t be the first time you’ve dug up old arcade games for console ports: what about Fighting Vipers 2 and Outtrigger for the Dreamcast?