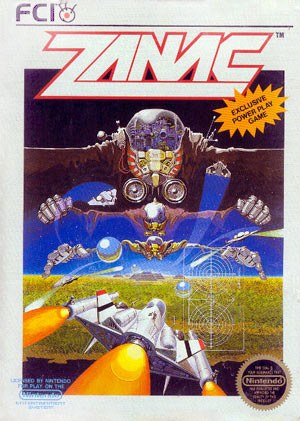 Two-dimensional space shooters were just starting to mature in the 8-bit era and Zanac on the NES is one of the best examples of more complex shooting gameplay in the dawn of console gaming.

Zanac eschews the usual wave-after-wave of enemy patterns. Instead, Zanac has an artificial intelligence that throws different kinds of enemies at you, depending on what weapon you are using. The result is one of the most innovative brand of shooters out there, as it’s always forcing you to adapt to different situations.

Zanac has an extremely visually repetitive look, given that this is one of the earlier NES titles and was a port of an MSX1 game, but the AI keeps every game at least somewhat fresh, so it’s still an amazing challenge.

This game is hard. Not cheap hard like RayStorm for the most part, but the unpredictability of the enemies causes quite a bit of a challenge. Not to mention the fact that the Fortress love filling up the screen with bullets, or launching these buggers that are difficult to destroy and make it difficult to hit the weak points of the fortress. You’re given (I believe) unlimited continues, but continuing at level 11 or 12 takes you back to level 10. Ouch.”
Destroy All Monsters

“Besides the impressive AI, Zanac has quite a few other nice features which, when combined with the AI, serve to easily set it a head and shoulders above any other shoot-em-up. For starters, the control is utterly perfect. Movement is accurate to the pixel, and the ship moves just fast enough to not seem sluggish, but just slow enough to not seem jerky. In keeping with this, Zanac scrolls along at a nice clip which, while nowhere near as fast as that in The Guardian Legend, gives the illusion of speed and makes 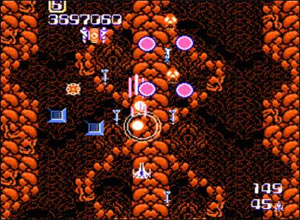 the action seem all the more frenetic. And frenetic it is…although Zanac starts out a bit sluggish, the AI soon gets annoyed with all the shooting and launches a startling amount of ships at the player.

Projectiles crowd the screen (slowdown-free, as previously stated) most of the time, and that perfect control is critical in staying alive (the player starts with three lives and can earn more, and there are unlimited continues. Still, the length of the areas makes dying, all told, not a great idea) long enough to encounter the “boss” bunkers, where the REAL action is. Sporting anywhere from eight to 30 gun turrets (all of which must be destroyed separately), most of the bosses will attack with a numbing onslaught of projectiles of every possible variety; thinking (as opposed to pure reflex) is completely out of the question if survival figures into your game plan.

Luckily though, the ship is extremely well-equipped for the task at hand… The amount of weapons available in Zanac is truly staggering. Although all these factors are secondary to the AI, each one adds to the fun and makes Zanac a hell of a blast of a good time to play.”
Johnathan G. Lampe

“When thinking about what Zanac looks like, the main thing that comes to mind is how fast it scrolls in some areas. Sometimes the scrolling, coupled with the bright palette choices, is almost headache-inducing for me, but insanely impressive at the same time. The backgrounds consist of unique, single-minded schemes: Crater-pocked planets, trees so dense you can’t see through them, bright blue asteroid fields, and alien space stations (most levels alternate the scenery a few times)…

Enemies consist mostly of small ships, but even at their miniscule size, they have intricate and often unique designs that fit their behavior. I especially like the small pods that break apart int 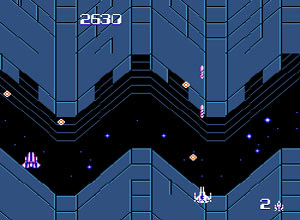 o two shells, releasing three missiles from their inner cavity, and the Metroid-like pulsating jellyfish that block your shots. The mini-bosses, which are large slow-moving ships, that appear in the middle of most stages, have designs that are both functional (an aster-shaped cannon that shoots in all directions) and bizarre (large winged or shielded eyeballs).”
FlyingOmelette

“Moderately good music. The “Extra Life” sound is an eight-note fanfare which you have probably heard before. (It’s used in The Guardian Legend, another ultra-classic NES shoot’em-up which some see as a sequel to ZANAC, and perhaps in other games too. It’s also included, as an homage, as the “Secret Level!” fanfare in Tyrian for PC. Two of the music pieces in the Tyrian sound test are “ZANAC3 and ZANAC5, and are very accurate reproductions of level themes from ZANAC.)”
SHMUPS!

Zanac is by no means a bad game just insainly hard! There are bullits comeing at you at every corner and seeing the small details in things coming at you is hard to avoide. I would Recomend this game but becuase of its good grafics that you think would be more than 8 bit but less than 16 bit i guess you could say its the missing 12 bit along with metal storm that had “12 Bit” Graphics but i dont have that. I have been searching the internet to see if this is a rare game but it only sells from $2 to $20 on ebay and only two people sayed it was rare but that can be sceem just to get it to sell. This Game Is sayed to have a sequil called zanacxzanac for the ps1 but only in japan they get all the good stuff. What I Would say is that this game was a good game that didnt make it to the tops and was only a small failure but id love to be proven rong!

Reply
Pingback: The Best NES Games Under $10 | The Daily Gamepad

I own a PAL NES and had it modified so I could play US games and one of the first games I bought in a local games store was actually Zanac. I bought it because I really liked the box art and on the back it said that the difficulty would adapt to your style of play, which made me somewhat curious. I enjoyed it very much and kept playing it over and over again even though it was so hard. However I bought this game somewhere in the early 90s and it took me quite some time to actually reach the final level. I think it was probably in 1994. I guess I wasn’t that good at it. I never finished the game which is something that never slipped my mind. I still have this copy and sometimes play it, it is still a challenge, still haven’t finished it.